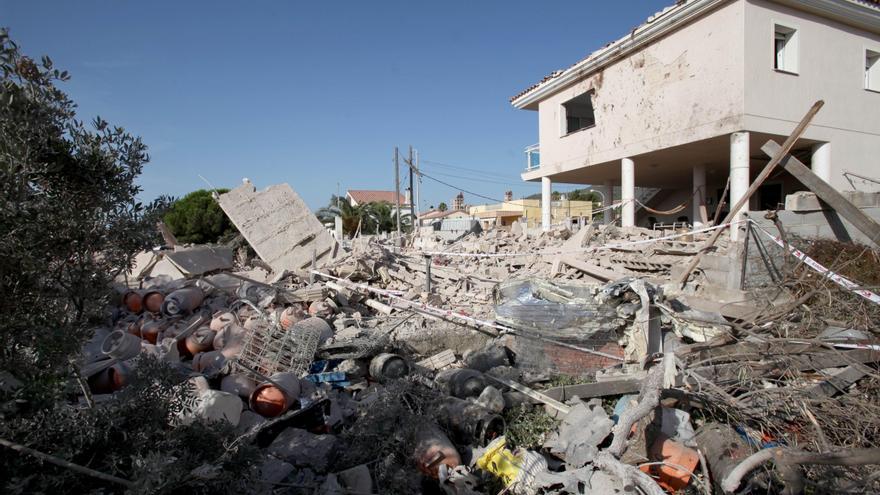 When Younes Abouyaaqoub murdered 14 people in his outrage on the Rambla in Barcelona, ​​several Mossos d’Esquadra patrols were inspecting the chalet in Alcanar (Tarragona) that had exploded the previous midnight. Investigators still did not know that the collapse of the house had been caused by the explosives that the terrorists made in it and that the accidental detonation precipitated the cell’s attacks. While they were digging through the rubble, a second explosion occurred.

A dozen mossos d’esquadra and two firefighters of the Generalitat who suffered the second explosion in the Alcanar chalet on August 17, 2017 have explained in the trial of the National Court how the events happened and the consequences they have suffered since then . The second explosion occurred shortly after a bulldozer started clearing large blocks of stone. The shock wave affected all public servants working in the area. But of the agents who have appeared this Tuesday, four have not been recognized as victims, as has happened with five other policemen and two firefighters.

The mossos who have declared, citizen security, information, investigation and scientific police, have reported that on the afternoon of August 17, shortly after arriving, and when the excavator had two or three shovels, a great explosion occurred that left them everyone stunned. “At that moment you are blind and deaf,” recalled an agent. “I saw faces full of blood,” said another. Most of the agents have sequelae in the ear and hearing loss, in addition to having suffered post-traumatic stress and anxiety attacks.

The most seriously injured mosso has a recognized permanent total disability. “I ran out, I met a firefighter and my boss and then I lost consciousness so they transferred the helicopter to the hospital in Tarragona,” said the agent.

Despite having been recognized as victims of terrorism, some of the agents who have testified have not yet received full compensation for the injuries suffered, and four others have not been recognized as victims of terrorism by the Ministry of the Interior. For his part, one of the firefighters who has declared has explained that the sequelae in the ear have prevented him from being part of the underwater group of the body, since the immersion could be dangerous for his health. The other firefighter sustained significant hand injuries and has been declared incapacitated.

Another of the mossos who has declared explained that he was in charge of counting and loading into a truck the butane gas cylinders that were in that explosives laboratory of the jihadist cell, the largest ever discovered in Europe, and with which the terrorists They wanted to attack the Sagrada Familia, the Camp Nou and the Eiffel Tower. In total he found 94 full and seven empty bottles. In the explosion, the spiritual leader of the cell, the imam of Ripoll Abdelbaki Es-Satty, who radicalized a group of young people from Ripoll, and another of the members of the cell, died. One of the three defendants at the trial, Mohamed Houli, was injured in the blast.

The first mossos who appeared at the Alcanar house after the explosion on the night of the 16th have testified that when they arrived they were unaware that it could have a terrorist origin. They added that after the explosion they proceeded to look for signs in the place that could clarify the causes and that already the next day, August 17, an excavator was used to remove debris until a second strong explosion took place around five o’clock the afternoon. Then the possibility that the explosion of the previous night had been due to a gas explosion was being considered. The outrage on the Rambla changed the hypothesis: the Alcanar chalet was the explosives depot for a terrorist cell.

Keep going the controversy between the lawyers and the president of the court who judges the attacks in Barcelona and Cambrils, Félix Alfonso Guevara. This Tuesday the Commission for the Defense of the Rights of the Person and the Free Exercise of the Legal Profession of the Barcelona Bar Association has demanded that the General Council of the Judiciary (CGPJ) initiate “disciplinary actions” against the magistrate.

The lawyers have expressed their “deep concern and rejection” by the behavior of the president of the court and have assured that with his “interventions out of tune, shouting and threatening” the lawyers, Guevara has resolved the conflicts in the room “with authoritarianisms and outbursts “rather than through legal arguments.

The lawyers have also stated that Guevara should publicly present his “respectful apologies” to the lawyers who have been “violated, pressured and conditioned and to all those people who have seen their right to defense limited by this excessive and inappropriate action.” This Tuesday the judge has not starred in any clash with the lawyers.

Barajas, El Prat and Palma, among the European airports that have lost the most flights