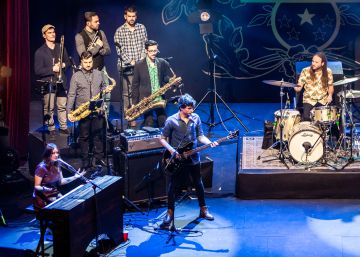 Morgan returns, and does it in style. The Madrid group publishes this Friday the first live album of its career, Home. Live at Circo Price, but he also has his third studio album ready, a work recorded in recent months at Le Manoir’s recording studios in France with producer Carles Campón, known for his close relationship with Jorge Drexler, but also collaborate with Xoel López, Vetusta Morla and Natalie Lafourcade.

Home. Live at Circo Price, which comes out this Friday, February 26 on all digital platforms, includes the concert that the band offered in January 2019 within the Inverfest programming. A very special night belonging to the tour of Air and where the group displayed all its virtues on stage. As a preview, today they shared Somebody to love, the version of Queen that they played that same night, in one of the most intense moments of the performance with the plethora of winds joined by the choirs, the instrumentation of the combo and the voice of Nina taking Freddy Mercury to his ground.

From the first cut, Planet Earth, kicking off that concert that is still remembered as one of the group’s best in its career, the album vibrates with great ardor. Home. Live at Circo Price collects with great fidelity every detail of that performance in which Morgan is shown to have one of the most overwhelming live shows on the Spanish scene. A live show that rises above the average thanks to its instrumentation like workhorses, galloping with verve and victorious arrest in its revolutions of folk, rock, soul and funk. Also thanks to the incombustible voice of Nina, captain of that stampede of wild horses, a throat of primary fire that fascinates as much for the purity of its brightness, as when it recreates itself in the heights in this direct in Blue eyes or in Oh oh, as they do also by the tear of their ballads, as in the cutting Iron sergeants Y Return, song that that night, as usual, the vocalist performed alone on the piano and, before the entire audience accompanies her singing the chorus with her, an “olé” of a guy is heard, enthusiastic at the waste of qualities.

There is so much honor in Morgan’s instrumental hits that almost seem like they came out of Chicago or Austin, such that if the blood of Alejandro Ovejero (bass), David Schulthess (keyboards), Ekain Elorza (drums) and Paco López (guitar) ran the american roots, those American roots that form the impressive fabric of American popular music. Sometimes as in Another Road (Getting Ready), they flirt with the colorful soul of Stevie Wonder to end in rock symphonies; in others, as in Work, they move between the R’n’B to varnish everything with pop; and in others, as in Home, the blues bathes a composition that ends in a kind of gospel prayer. The catalog is very rich.

Live at Circo Price It is the best testimony that Morgan are great live. It is on stage where the true stature of the artists is shown and, in the case of this group from Madrid, it can be affirmed, listening to this album, that they are even better than in the studio. Outside the patterns indies, so installed in the Spanish circuit, the facility to connect with the public is amazing, offering a sonic banquet so tasty and different from the rest. For after the summer, expect a new studio album and it will be another opportunity to gauge Morgan’s quality. The group shoots hard in this 2021. It says a lot about this band, a hungry and ambitious band.