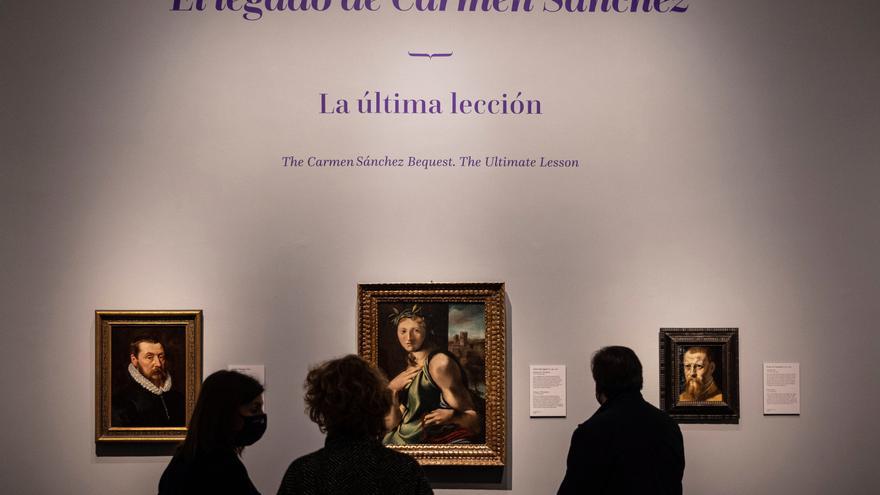 Madrid 22 Mar (EFE) .- In 2016, the Prado Museum received the surprise that an ordinary citizen, Carmen Sánchez, a teacher and art lover, left it all her assets to buy paintings. Fifteen acquisitions are the result of that unexpected generosity, all the works cover historical gaps and also add two new women artists to their payroll.

The set of the acquired works can be seen from today until October 24 in “El legado de Carmen Sánchez García (1929-2016). The last lesson ”, an exhibition that pays tribute to the generosity of this teacher, progressive, defender of equality and art lover, who was a member of the Fundación Amigos del Prado since 2003 and participated in about twenty of its courses.

“Today is an important day for Spanish civil society and for the Prado Museum. Today we have to give back part of our generosity to Carmen Sánchez, a woman who loved the Prado so much that she gave her all her goods, ”said Miguel Falomir, director of the art gallery.

The museum has worked hard to take advantage of the money left by Sánchez. The legacy was received in 2016 and was around 800,0000 -money and a floor that was auctioned-, with this amount fifteen paintings have been bought, a high number, since they have tried to stretch the amount to the maximum, skipping intermediaries.

Among the fifteen works there are "masterpieces", according to Falomir.

"Allegory of Temperance" by Alonso Berruguete (about 150,000 euros) is probably the most important, one of the few known works of this painter's period in Florence and Rome; and also a self-portrait of Pedro de Campaña (about 170,000 euros), a fundamental work to know the origins of the portrait in Spain.

Also noteworthy are the works by Mariana de la Cueva y Barradas - “San Francisco rolled in meditation” -the only known painting of this painter- and “Joven con cofia” by María Blanchard, two women who join the meager list of women artists from the Prado collection, which is around ten.

There are also three works by Eduardo Rosales and a Mariano Fortuny, “Landscape Neapolitan”.

The Prado Museum was never aware of the intentions of this teacher, who for many years worked at the Nervión school, an institution linked to secular education, heir to the Montessori pedagogy.

Relatives and former students of the benefactor have remembered her figure today. “Carmen could not leave the world in any other way. It was very generous. As a teacher she was upright but at the same time not rigid, she was always challenging us, ”one of her former students present at the presentation today in Madrid explained to Efe.

He worked until 1999, when he retired, and then used the last years of his life to his great passion, art. It is not difficult to imagine her touring the same rooms that now occupy the exhibition made with her legacy.

"The private initiative is essential for our collections," said the curator, Pedro Martínez Plaza. But it is also true that most of the donations to this gallery and others usually come from large collectors.

This generosity of the benefactress is one of the reasons that this legacy is so special and that has made the art gallery work hard in the exhibition that is seen today.

The most controversial acquisition has been a work by María Blanchard, an eminent cubist artist, who went through different stages.

The purchase of this painting reopened a few weeks ago the debate on the partition between the Prado and Reina Sofía collections, divided by the birth of Picasso.

“It does not seem strange to me that he is in the Prado. It is a painting that corresponds to a post-cubist stage, which is the one that most interests the Queen. It has almost traditional borders that connect with painters who are very well represented here, such as Álvarez de Sotomayor, who was his teacher ”, explained Falomir.

A nephew of the benefactor, Manuel Uriarte, today wanted to praise the work of the Prado with the legacy of his aunt. Although he has also denounced that for a part of the family the process has been somewhat "overshadowed" by the disappearance of two paintings owned by his aunt, an Emiliano Barral and an Albérto Sánchez, who are missing.

The Prado Museum apparently, after learning of this alleged disappearance, asked the executor and the notary about the works but, as there is no inventory of his legacy, the origin of his disappearance is unknown.

The legacy has meant the incorporation of the library and the archive of the professor to the Prado collection.