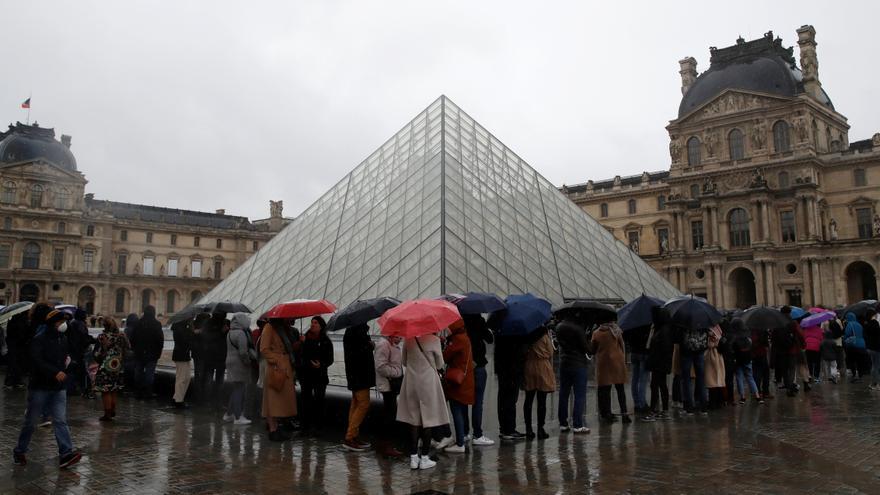 Museums celebrate their International Day on Tuesday at a difficult time. More than a year after the pandemic, the sector has mixed feelings: signs of recovery are beginning to arrive, but an important part of museums around the world are still closed and those that are open still see the expected recovery very far away.

The theme of International Museum Day this year is ‘The future of museums: recover and reimagine’. Faced with the festive nature of previous years and the drama of the lockdown twelve months ago, this year’s day arrives with half-empty museum halls.

According to ICOM, the International Council of Museums, approximately half of the world’s museums are still closed. This week the doors reopen in several countries: France will do it this Wednesday and England this Monday. Others like Italy have been open for a few weeks, while Spain has opted for a total opening of the cultural sector since the lockdown ended.

Meanwhile, losses accumulate and museums struggle to find new models that allow them to connect with the public and find business formulas in a volatile scenario. In the last year, major museums around the world have lost three out of four visitors and millions of euros at the box office. “Change, innovation, participation and interaction with our communities are the keys to this year. The situation is still dire in many countries. We are recovering, but slowly, even in Europe ”, summarizes Alberto Garlandini, president of the International Council of Museums (ICOM), to Efe.

From full opening to full closing

The models adopted last year by the countries have been diverse: Spain is one of the few that has opted for the total opening of its spaces dedicated to art since confinement, Italy and other countries have closed depending on the waves and museums of USALike the Smithsonians, they have been completely closed since the pandemic began until last week.

“We are lucky, practically we are the only capital in Europe that is open to culture. But we basically nourish ourselves with the public from Madrid, and not even, because there have been times when people from some areas could not come (due to selective confinements) “, said at the end of April the director of the Prado Museum, Miguel Falomir. In March and April, the Prado reached nearly 3,000 visitors a day on average, a milestone since the pandemic began, but still far from the 9,000 in 2019.

Italy and other European countries opted instead to close and open their museums coinciding with the waves that the country has suffered. Since the beginning of the pandemic, Italian museums have closed in three periods: the spring of last year, with the first confinement, as well as in the following waves, between the months of November 2020 and January 2021 and February and May of this year. A few weeks ago the most important ones reopened, among them the Ufizzi, the largest and most important art gallery in Italy, but no sign of tourists in its rooms. Since March of last year they have lost more than 30 million euros and they only hope to return to ‘precovid’ levels in 2022 if there are no other closures, their director, Eike Schmidt, explains to Efe.

France opens this Wednesday. The Louvre, the most visited art center in the world, and other museums have been closed for more than seven months, which has been a cultural earthquake for the country. England opens its museums this Monday, a highly anticipated opening. A spokesman for the British Museum assured Efe that “crave” to receive visitors again. The opening of museums, as happened after the confinement, has a high symbolic charge.

In the United States, the situation varies from state to state; In New York they have been open since August and have noticed more influx than in other places since it is the only cultural offer available in the city, but the Smithsonian Museums in Washington did just a week ago.

In Tokyo they are still closed at least until the end of this month, until the state of health emergency in the region has been extended, while in Mexico, where some centers have reopened but many others have not, the majority drag economic problems and fear the definitive closure.

In Argentina, on the other hand, they were open until last month with capacity restrictions, but their closure has been decreed due to a new wave of cases. Until then they had “their shifts at full capacity,” Florencia Ure, head of communication for the national museums, told EFE.

Everything points to what in 2021 the losses will continue, at least until some normality in international tourism recovers. In the case of European museums, tourists account for three-quarters of total annual visits, and the drop in revenue at the box office is dizzying.

Losses spread to the rest of the world: Moscow’s Tretyakov Art Gallery lost 55% of revenue compared to 2019, and in Japan museums have lost 59% of their revenue. The Italian Ministry of Culture figures the collapse of visitors last year at 75.6%, and a loss at the box office of 189.7 million euros. A spokesman for the British Museum assured Efe that this crisis “has had an impact on their finances”, but it is too early to quantify it; everything will depend on “the speed of recovery”, which does not seem to be immediate.

The New York Metropolitan, for example, whom the pandemic has caught on its 150th anniversary, estimated that it would lose about 150 million in 18 months and He considers selling works to ‘support’ his budget, which is known as ‘deaccessioning’. The Brooklyn Museum has also sold some of its works in recent months to cope with its dramatic situation. These types of decisions, full of controversy, have a history in 2008, with the previous financial crisis.

Faced with this panorama, virtuality has been for many spaces the only way out to keep in touch with the public and a place to look for new business models. All museums have made an effort to put their content on the internet and intensify their proposals through social media. But not everyone has tools at their disposal for this.

In Mexico, for example, the Soumaya Museum, Frida Kahlo’s Blue House and the Palace of Fine Arts have made temporary exhibitions available to the public online, but the truth is that more than 60% of Mexican museums do not have digital resources, according to data from the Institute of Leadership in Museums and the National Autonomous University of Mexico.

The Hermitage in St. Petersburg, one of the most visited in the world before the pandemic, has reduced its visitors by 60 percent, but its virtual audience has risen from one million a year to more than 80 million now, according to museum data.

Museums are also trying to take advantage of this new digital audience: the Prado Museum has begun to charge virtual visits of his first temporary exhibition of the pandemic on Titian. The price is 2.5 euros, the same as the audio guide. The Pushkin Museum in Moscow has also begun to charge for the possibility of connecting to some of its virtual programs and the Thyssen-Bornemisza Museum in Madrid implemented a service of private “online” guided tours.

Many of the changes that museums have made over the last year has come to stay, as recognized by the president of ICOM, Alberto Garlandini. “Museums are changed. If we believe that at the end of the pandemic we will open the doors and everything will be the same again, we are very wrong – he predicts -. It will be the opposite, we will have to innovate and change.”