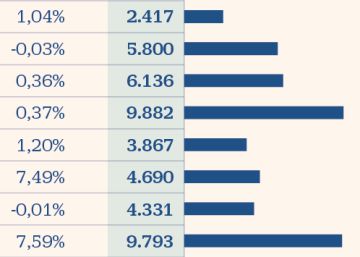 It is an opportunity to return the fund without paying any tolls. Allianz Popular, the manager created in 2011 as a joint venture between the German insurer and the extinct bank, it is from Friday to 100% of Santander. And this has an advantage for the more than 50,000 participants, according to the latest data available at the CNMV, of any of the 10 products of the firm that were protected by a powerful 5% reimbursement commission (see graphic). Fund regulations allow them to leave without paying.

Allianz Popular AM informed the CNMV last Friday that the bank headed by Ana Botín is already the owner of the 60% that he did not control of the firm. For this purchase and the breakdown of various insurance distribution agreements, Santander has delivered 936.5 million euros to Allianz in an operation announced last June.

The new owner must inform all the participants of the funds of the acquired firm of the change of control within 10 days. And since the investors receive the information they will have 30 days to exercise the right to divorce without expenses, as specified by the legislation of collective investment institutions.

The assets of the funds with reimbursement commissions of Allianz Popular total more than 1,400 million, according to Morningstar data. That is, almost 20% of the 7.225 million the firm had at the end of January, according to preliminary data from Inverco, the association of the sector.

The vast majority, eight, are guaranteed products, in which the manager undertakes to deliver a specific return on a date. The other two portfolios are of objective profitability, in which a calculated interest is expected when building the initial portfolio but this is not guaranteed with a derivative. Precisely, that you do not have to sell assets ahead of time is crucial for your profitability to come to fruition, hence the reimbursement commissions to discourage investors from selling.

In all cases of Allianz Popular, performance is linked to the evolution of an index, such as the Euribor or share baskets. Investors have earned money with these products. From their respective releases, in all cases, and during the last year, in most. Two products have barely moved in the last 12 months: the first edition of the Eurovalue Guaranteed Stock and the second chapter of the Eurovalue Guaranteed Europe.

The maturities of the portfolios, which in all cases have liquidity windows, mostly one day, in which the participant is not charged for leaving. The dates set for investors to pocket the promised return range from May next year to January 2026.

The definitive union, Already intuited since June 2017 when Santander bought Popular for one euro, destabilizes the ranking of funds. The manager presided by Ana Botín will advance to that of BBVA and will be placed less than 2,000 million from the leader, that of CaixaBank. The latter is the first at the end of January with just under 48,000 million euros, followed by the union of Santander AM and Allianz Popular AM, with about 46,000 million, and the third will be the signature of the bank chaired by Carlos Torres, with more than 41,000 million. Then there is Bankia Fondos with almost 20,000 million.

Both Allianz Popular and Santander AM already have the same and sole owner. But it remains to consummate the integration, which will be carried out throughout this exercise through an absorption of the first by the second.