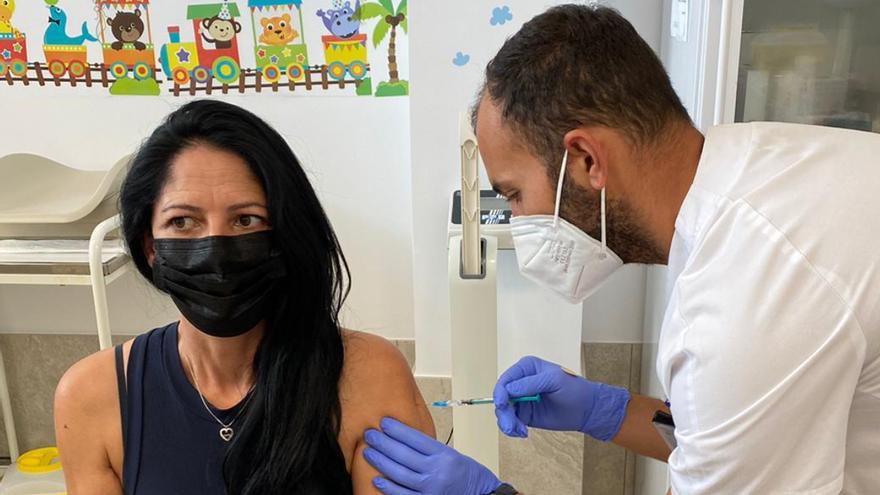 More than 100,000 residents in the Canary Islands have processed their registration in the first 24 hours of operation of the new web form (www.canariassevacuna.com) launched this Monday by the Ministry of Health of the Government of the Canary Islands to request an appointment to receive the COVID-19 vaccine. This new service is one more resource of the Canary Islands Health Service (SCS), which is complemented by the others available for age groups with active vaccination.

Precisely, since Tuesday, residents of the Canary Islands over 50 years of age who have not yet received an appointment for the first dose of vaccine You can call to request it through 012 (or 928 301 012 or 922 470 012). This citation system is added to the sending of sms or calls that is made as a usual protocol of notification to the population from the SCS, as well as the possibility of users to process their request through their health center.

The rest of the population over 16 years old and under 50 years old could make their previous appointment for vaccination through the web form canariassevacuna.com. In this tool the user will fill in a simple form by filling in the fields of full name, DNI or NIE and contact mobile phone.

This information will be compared with the database of health cards and the SCS will contact the user to arrange their appointment for vaccination at any of the points enabled throughout the Canary Islands.

Appointment according to age group opening

The appointment will be scheduled according to the age group of the user, the advance forecasts of the vaccination calendar and the opening of each of the vaccination age groups, with the aim that the entire target population of the Canary Islands is vaccinated against COVID- 19 this summer. In this way, the order of priority by groups established in the vaccination strategy will continue to be maintained. The previously assigned appointment may be modified once the agendas corresponding to the age group in which the user is found are opened.

More than 100,000 canaries register on the web form to receive the COVID-19 vaccine. Read more

Likewise, in the Archipelago there are already 686,055 people who have received at least one dose of the vaccine, that is, 36.67 percent of the target population.

The Areafit gym has issued a new letter addressed to its users in which it no longer denies being the origin of the largest outbreak of Covid recorded so far on the island, but yes continues to reduce the data released by the Ministry of Health to less than a quarter. On its Facebook page, the company comes to speak of “media circus” due to the information that has been published, and insists on blaming the cases detected in this center to “statistics”, having carried out a screening among more than 1,300 workers and users. “We regret that such a difficult decision has led us to even further targeting simply for trying to act consistently.”, they point out in reference to that screening carried out by the Health area, as well as the temporary closure that the gym ended up agreeing to two days after starting those massive tests.

ANPE, in a statement, has indicated that the stoppage of the Astrazeneca vaccination of those under 60 years of age made it difficult to plan immunization in the teaching community, although it has warned that in other autonomous communities the process has been carried out at a much faster pace agile than in the archipelago.

The President of ANPE Canarias, Pedro Crespo, has opined that, although it seems to him good news to extend vaccination to the entire population, it is “at least chaotic that not only has the teaching staff not been finished first, as had been announced, but that they have not even been able to make an appointment in many cases and even today do not know when you will be vaccinated. ”

The ANPE Canarias union has denounced this Tuesday that the archipelago has lagged behind in the teacher immunization with regard to “many” other autonomous communities of the national territory and has requested information from the authorities after the Government has announced that the entire population residing on the islands can request an appointment now.

A 75-year-old man suffering from Covid-19 and who had completed the vaccination schedule died in Tenerife due to the effects caused by the pathogen. This was confirmed yesterday by the Ministry of Health of the Government of the Canary Islands, which also specified that this death was the only one registered this Monday in the Archipelago. It should be noted that the patient, who did not suffer from underlying pathologies, had been inoculated with the Pfizer serum. However, a few days before receiving the second injection and, therefore, if she was able to develop immunity, she began to experience symptoms compatible with the ailment. Read more

The announcement of the vaccination from the age of 16 saturates the web of appointment. Read more

A 74-year-old man who had put both doses of the vaccine dies with covid. The man died in Tenerife and before receiving the second injection he had manifested symptoms compatible with the condition. Read more

The Canary Islands registers one death and 107 new cases of coronavirus. So far a total of 1,117,317 PCR tests have been carried out on the islands. Read more

The Supreme recognizes that mobility can be restricted without being alarmed. The High Court, which publishes the ruling that dismisses the appeal of the Government of the Canary Islands against the suspension of the curfew and the perimeter closure, affirms that state and territorial laws can establish specific limitations. Read more

Health opens to the entire population of the Canary Islands the previous appointment for the vaccine. The Ministry of Health of the Government of the Canary Islands, through the Canary Health Service (SCS) enables from today Monday. May 24, a web form (www.canariassevacuna.com) in which any Canarian resident, regardless of their age and the island on which they reside, may request a prior appointment to be vaccinated against COVID-19.

Furthermore, one of the new infections It is related to sports activity, thus amounting to 69 cases registered between users and workers of the center.

It should be remembered that Health did a screening that ended a week ago and in which 1,328 PCR were performed, confirming a total of 68 direct infections in the gym, but now one more has been added.

British tourists can travel to Spain from today without PCR. Read more

The pandemic establishes the ‘online’ reading of doctoral theses at the ULPGC. Read more

The Canary Islands will collect more than 19 million euros for the fines of the state of alarm. Read more