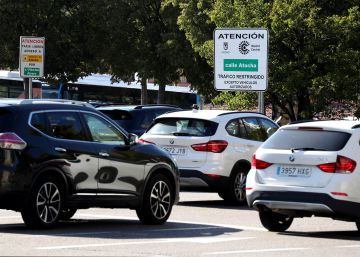 Central Madrid has become one of the capital’s political struggles. Although currently the low emission zone (ZBE) is still active, the government team formed by PP and Cs has shown its intention to modify it. They presented their plan, Madrid 360 that is not yet working, as “more ambitious” than the current one, but all the steps they have taken have been to make the current regulations more flexible, which since its implementation has reduced pollution by around 20%, according to the monthly balance with municipal data carried out by Ecologists in Action.

The last and most drastic change in Central Madrid promoted by the City Council came last week: On Thursday, Mayor José Luis Martínez-Almeida announced that he was cutting the ZBE. Two streets in the Moncloa area (Mártires de Alcalá and Seminario de Nobles, in the surroundings of Moncloa) will reopen to traffic. In addition, in January 2020 the restrictions had to become more demanding, but at its last executive meeting the City Council also extended the moratoriums to pollutant vehicles of various types.

Starting next year, vehicles without a label will not be able to drive or park in Central Madrid. Until now, if a resident invited a driver with this type of cataloging, he could access. Now, they are banned. As in the SER (Regulated Parking Service) area, basically the interior of the M-30. There, vehicles without a label may drive, but not park on the surface. Yes, they can use the car parks in the area or park on the street outside the SER schedule. All these rules were collected in Central Madrid.

Almeida maintains a complex relationship with the ZBE. Before the elections he bet on his dismantling (in fact he tried to paralyze her, but several judges prevented him); Then he talked about his improvement and expansion. During the Madrid Climate Summit he defended Madrid Central and its good results; When environmental delegations from around the world left the capital, the mayor again proposed to decaffeinate it. That was what he did last week: Almeida had already announced extensions of some moratoriums to the most polluting vehicles that met this month; Last Thursday he made them come true.

Thus, professional vehicles of more than 3,500 kilos will be able to access the ZBE until December 2024; those of less than 3,500, until December 2021 provided they have a label. The City Council also intended to let vehicles without a label circulate, but the rule prevents it. Yes, they can pass, for another year, the vehicles without label of the fathers and mothers of students whose centers are in the area. The delivery bikes extend their access schedule to Central Madrid (from 10 pm to midnight; except for those that do not have a label). Individuals and other motorists maintain the current limit.

City Council sources defend these changes as “improvements” of the ZBE. The opposition, Más Madrid and PSOE, considers that “Central Madrid goes bankrupt and puts Madrid’s health at risk”. Greenpeace is concerned about the mayor’s drift: “The confusing message that they are moving that the ‘ZBE is’ improved’ while being flexible is very dangerous,” explains Adrián Fernández, head of mobility of the environmental organization, “that Informational chaos ends up increasing traffic. ” This is what happened in October, when after months of reduction, traffic grew again.