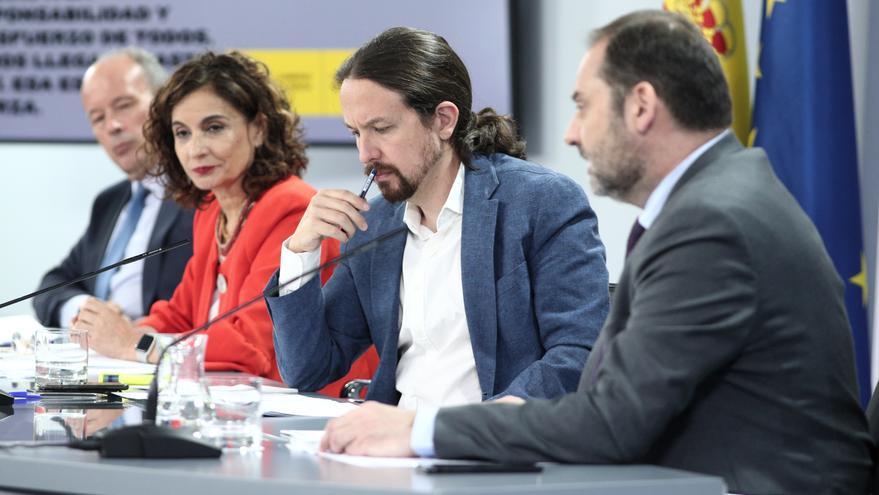 The second vice-president Pablo Iglesias will present this Tuesday to the Council of Ministers the 'Progress Report 2020', which details the measures implemented to achieve the sustainable development goals committed to the 2030 Agenda. But the document, which he has had access elDiario.es, is also the first government report on its first six months and the first in which Spain is accountable for its management of the COVID-19 pandemic.

It is also a kind of post-pandemic reconstruction plan based on the pillars of the 2030 Agenda, for which Iglesias is the most responsible, and which could be summarized in the end of poverty, the reduction of inequalities, the ecological transition and the protection of the environment to tackle the climate emergency. In this sense, the document bets on a green reindustrialization, in line with the pact reached last week by the Government with the social partners, which advocated laying the foundations for a new, more green, digital and inclusive economy.

But in this case, the 'Progress Report 2020' also delves into the healthcare and care needs, on which the COVID-19 pandemic has focused. Because, according to the document, "the pandemic has shown the effect of cuts in social care structures and has greatly affected the almost non-existent, and often informal, care and conciliation structures."

With this document, Iglesias will bring the proposal for his state care system to the Council of Ministers on Tuesday. A system with which the Vice President of Social Rights seeks to "extend and strengthen the system of care for dependency through the expansion of the public network of residences, home care and the increase in the allocation of resources of the Dependency Law ", to allow coverage to the 270,000 people who, according to government figures, have recognized the benefit, but who are not receiving the corresponding resources.

The Government will also address the extension of the network of early childhood education schools in the stage of 0 to 3 years, "a powerful tool to fight poverty and in favor of equity," indicates the text, which reflects that in 2018, the 29.5% of Spanish children and adolescents were at risk of poverty and social exclusion. An inequality that carries over into adulthood, as a consequence of the Intergenerational Transmission of Poverty, and which has also uncovered the COVID-19 pandemic, which has exposed the "difficulties that many families have experienced in making their children and daughters could continue their distance education "due to lack of equipment, internet access or a suitable place at home.

Another axis of the state care system promoted by the second vice-presidency has to do with guaranteeing the right to care in equal conditions, without this "supposing a resignation for women", who assume the majority of the care burden, "and that caring , without society penalizing them, it is also a human right ". To this end, the Executive is already working on different regulatory frameworks, such as the Co-Responsible Time Law and the regulation of telework with a gender perspective.

The other leg of this system rests on the right to work in care under decent conditions. The balance of these first six months of the coalition government recognizes that the health, social and economic crisis of COVID-19 has "made even more apparent" the conditions "of enormous precariousness" in which the professionals of care and home employment, which is estimated at about 300,000 jobs.

Throughout its 228 pages, the report repeatedly compares the response to the economic and social crisis of COVID-19 with the one that occurred in 2008. The Government acknowledges in this document that, 12 years later, "the recovery economic situation in recent years is not reaching all people. " Specifically, it indicates that in 2018, almost 12.2 million people - 26.1% of the population - remained at risk of poverty. They are two more points than in 2008, which place Spain at the head of the EU for its high poverty rate and little ability to reduce it. In addition, the Executive stands out for its measures to "reinforce public health, job protection through the ERTE and the Minimum Vital Income", approved during the pandemic.

The report also points out the need to increase social spending to strengthen public resources and consolidate the response to the crisis. The tax prescription proposed in the document is to bet on a progressive system. "In our tax structure, personal income tax is the only tax that makes the system progressive, but the changes made in recent years, which have given more weight to indirect taxes, which are more regressive, have contributed to the increase in inequality. In other words, they have involved a translation from direct taxation to indirect taxation, and, indirectly, from capital income to labor income, "says the document, which advocates reversing this trend. Precisely, according to Eurostat figures cited in the report, in 2018 the tax burden in Spain was 35.4%, five points below the European average and six points below the countries of the euro zone.

The document points out that the next General State Budgets, which the Government wants to present before September 30, will be the first to incorporate a report on alignment with the objectives of the 2030 Agenda, which allows analyzing how public budgets contribute or no to the Sustainable Development Goals. Some communities, such as Andalucía, Aragón, Canarias, Cantabria, Catalunya, Euskadi, Galicia, Madrid, Melilla and La Rioja, have already carried out this pilot exercise.

Following the Council of Ministers on Tuesday, Iglesias will present the 'Progress Report' on Wednesday, along with the fourth vice president and minister for the Ecological Transition, Teresa Ribera, and the United Nations Deputy Secretary General, Amina J. Mohammed.