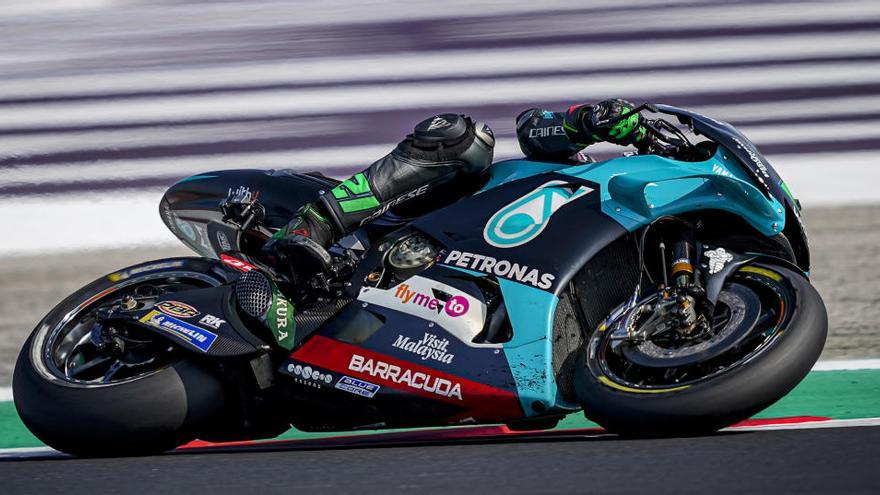 Italian Franco Morbidelli (Yamaha YZR M 1), despite suffering a fall, closed the first day of training of the Catalan Grand Prix of MotoGP in the circuit of Barcelona, in front of the classification.

Morbidelli’s eagerness caused him to make a mistake, perhaps harmed by the wind, which hit the ground at turn ten while still there were more than twenty minutes of training left, and he was not the only one since shortly after the German Stefan Bradl (Repsol Honda RC 213 V) fell in turn two, at the same point that in the morning he had a mishap, without consequences, the Spanish Iker Lecuona (KTM RC 16 ), which also crashed in the afternoon at turn twelve.

Morbidelli was eventually beaten by a series of pilots, conditioned by the use of a single motorcycle after falling with the other, including the South African Brad Binder (KTM RC 16), who with less than five minutes of training rolled in 1: 40.008, which was already the fastest of the day, ahead of Joan Mir (Suzuki GSX RR), Takaaki Nakagami (Honda RC 213 V) and Alex Marquez (Repsol Honda RC 213 V), who came in second, although without lowering Fabio Quartararo’s morning record.

But the Italian rider was not willing to give up the lead without fighting on a track in which he felt very comfortable throughout the first day, which in the end allowed him to drop one minute and forty seconds when rolling in 1: 39.789, which gave him the first position, ahead of the French Johann Zarco (Ducati Desmosedici GP19), who achieved his best time behind that and in the last lap of the second session.

The world leader, the Italian Andrea Dovizioso (Ducati Desmosedici GP20), which had been second in the morning, could not improve in the afternoon session that record and ended up relegated to a worrying, for him, fifteenth position, between the Spanish Aleix Esparagró (Aprilia RS-GP) and Iker Lecuona (KTM RC 16).

Joan Mir (Suzuki GSX RR), highlighted in the morning when he was third, had to settle for seventh position, ahead of fellow Spaniards Pol Espargaró (KTM RC 16) and Alex Marquez (Repsol Honda RC 213 V).

Valentino rossi (Yamaha YZR M 1) concluded in tenth position, just the last with direct access to the second classification, to which for now Alex Rins (Suzuki GSX RR), eleventh, did not agree that both in the morning and in the afternoon he returned to his workshop pushing the motorcycle, probably without gasoline in the tank.

Sam Lowes (Estrella Galicia 0’0 Kalex) defeated the world leader, the Italian Luca Marini (Kalex). The British set a best time of 1: 44.122, which was still somewhat far from the absolute record in the category on this track, held since 2018 by Frenchman Fabio Quartararo with 1: 43.474.

The Madrilenian Jorge Martin (Kalex) and the Australian Remy Gardner (Kalex) have been the main novelties in the first round of free tests in the Montmeló circuit in the Moto2 category, after be positive for Covid-19 the first and suffer an injury in Italy, the second.

The initial bars of the session did not change the usual panorama much because the Italian Luca Marini (Kalex), world leader, was also the first leader of the batch, although with his own teammate, Marco Bezzecchi as his most direct rival and with several local drivers “cuddling” from the beginning, as was the case with Jorge Martín himself, Xavier Vierge (Kalex) and Augusto Fernández (Estrella Galicia 0’0 Kalex).

All of them, in addition to the German Marcel Schrotter (Kalex), first with 1: 45.080, ousted Marini and Bezzecchi from the top positions in a much faster and more combative start to the session than one might expect, perhaps due to the increase in temperature environment and the drop in wind intensity.

This is how, when entering the last ten minutes, one of the first surprises of the day arrived when the Spanish Arón Canet (Speed ​​UP) climbed to the first position, debuting in the category with the team of Jorge Martínez “Aspar”, that rolled in 1: 44.964 and with it surpassed by 116 thousandths of a second to the German.

But the “hostilities” of the last section of the session, when practically all the pilots “fit” the soft rear tire, had begun and first Luca Marini and then the British Sam Lowes (Estrella Galicia 0’0 Kalex) relegated from the first position to Canet.

The Spanish Raúl Fernández (KTM) commanded in the first day of free practice for him Catalan Grand Prix Moto3 on the circuit Barcelona with the record that he achieved in the morning session and that nobody could overcome in the second session of the day.

Fernández shot in 1: 48.835 and the one who came closest, with his evening registration, was also Spanish Jaume Masiá (Honda), who shot in 1: 49.134, and Whom Race Direction exonerated in the claim which was presented by the Italian team Sky considering that the electronic control unit of their motorcycle did not comply with the regulations.

Although the weather conditions were very good, the strong wind became a bad partner in the session at some points of the circuit, which to some extent hurt the drivers, especially if they hit from the side or from the front, while it benefited from a notable improvement in speed if they hit from behind, as was the case on the main straight of the Catalan track.

This second Moto3 free test session started somewhat “agitated” by the numerous “scares” that occurred on the track, some of them spectacular, such as the one starring the fastest in the morning, Raúl Fernández (KTM), or the Japanese Ryusei Yamanaka (Estrella Galicia 0’0 Honda), both without consequences for the riders, who managed to stay on their bikes.

The first relevant fall came from the hand of one of the contenders for the title of the category, the Italian Celestino Vietti (KTM), who crashed at turn three and with the bike badly damaged he missed training despite the effort of its mechanics for trying to get the bike back and get it back on track as soon as possible. Vietti finished 26th in the provisional classification.

He was not the only one to roll on the ground, because shortly after the third in the world classification, the British John McPhee (Honda) went to the ground and the Argentine-Hispanic Gabriel Rodrigo (Honda), another of the contenders for victory in all the great prizes, which highlighted the poor grip of the asphalt in those opening minutes of the session, perhaps due to the strong wind.

At that time, the leader of the session was Italian Tony Arbolino (Honda), who also suffered a crash at turn ten, but with a time of 1: 49.952 he was still very far from the morning record of Raúl Fernández (KTM), with 1: 48.853.

Arbolino, who had to go through the circuit clinic, was unseated from the first place by the South African Darryn Binder (KTM), with 1: 49.650, and Raúl Fernández (KTM), who little by little recovered from the scare Initially, although at the end the best time of the session, without coming close to the KTM record in the morning, was for the Spanish Jaume Masiá (Honda), with 1: 49.134, who at least did improve his personal record.

Nor does your personal record better the leader of the World Cup, the Spanish Albert Arenas, who finished seventh between the British John McPhee and the Italian Niccolo Antonelli (Honda), while his most direct rival for the title, the Japanese Ai Ogura (Honda) could not improve his situation much compared to the morning and ended the day in the twenty-third position.

Carlos Tatay (KTM) finished in a creditable ninth position, Alonso López (Husqvarna) in the fourteenth and last with the right to directly access the second classification, while they should go through the first Jeremy Alcoba (Honda), sixteenth; Sergio García (Estrella Galicia 0’0 Honda), seventeenth; and José Julián García (Honda), twenty-seventh.