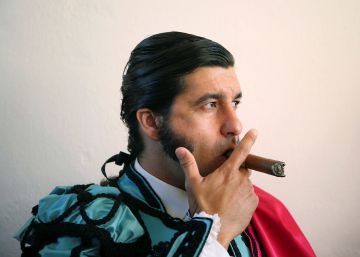 “They will allow me, but the important thing here today is not the reopening of the square, the great news is that Malaga has changed presidents; I don't care about ears, the important thing is the recognition. I want the fan to enjoy, and for that an appropriate bull is necessary. ”

With these words yesterday the bullfighter Morante de la Puebla surprised the large audience that attended a presentation of the bullfight poster that will open this year the bullfighting show on August 14 to celebrate the reopening of the bullring of Malaga after the rehabilitation works ,.

The Sevillian right-hander was accompanied by his two fellow cartel members, Enrique Ponce and Javier Conde, in an act that was chaired by the mayor of the city, Francisco de la Torre, the president of the Provincial Council, the secretary general of Interior and Spectacles Public of the Junta de Andalucía and the bullfighting businessman José Carlos Escribano.

In front of all of them, Morante played down the reopening of the bullfighting thing, which has undergone a deep remodeling to transform it into a great cultural center, and the original image of the building has been recovered, to emphasize the change of the two presidents with whom some figures have maintained serious divergences on the required presentation of the bulls in a first place such as Malaga.

The Junta de Andalucía decided to cease at the end of April Ildefonso Dell'Olmo and Ana María Romero, who exercised their functions in the box since 2009 and 2007, respectively, and appoint in their place the bullfighting journalist and critic Antonio Roche and Dr. Carlos Well, head of the Medical Services of the Diputación de Málaga.

There is a circumstance that in the month of July last year, four professional bullfighting associations submitted a letter to the Ministry of Interior requesting the rejection of Ana María Romero, which they accused, among other things, of arbitrariness in the veterinary examinations of the bullfights and animosity towards the figures and towards certain farmers.

On the other hand, the affected one denied to this newspaper that it had had confrontations with the most recognized figures nor that it rejected more bulls than the other presidents. "Malaga has been the first place since 2006 and, perhaps, some bullfighters are reluctant to accept that the demands have increased," he explained.

Days later, the Junta de Andalucía publicly supported the president; In spite of this, the system of shifts between the two presidents was maintained, and Ana María Romero did not preside over the celebrations in which the figures were announced. Months later, with a new regional government, it has been ceased.

Perhaps, for this reason, the words with which Morante de la Puebla closed his surprising statement: "I want to thank the Board for their sensitivity for having listened to the professionals" sounded premonitory. (As if someone had promised bullfighters that, from now on, the presidential teams will be more generous in the recognition of the bullfights).