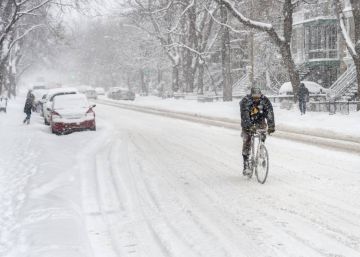 The Canadian city of Montreal It appears every year in the lists of the best worldwide destinations for bicycle enthusiasts. The metropolis of Quebec is also known for its freezing temperatures for much of the calendar, but that does not stop cyclists. More and more people are pedaling through their arteries in the cold months. 17% of the total number of cyclists in the city choose to use this means of transport throughout the year, according to the mayor’s calculations.

In the fall of 2007, François Démontagne decided to continue using his bicycle until it was unbearable. The days passed and, when he realized, the month of March had arrived and he had not given up his goal. His experience that winter led him to open Vélo d’hiver-Montréal [Bici de invierno – Montreal], a group on Facebook that has been imposed as the city reference for this practice. “We already have almost 10,000 members. It is proven that the bike It is an effective means of transport, does not pollute and contributes to good physical condition. However, it also represents an important activity so that the cold months are not very long, especially in a period where people are in little contact with sunlight. Cycling in the winter is very pleasant, ”he tells this newspaper.

Between January and February – the coldest months in the northern hemisphere -, Montreal It has an average temperature of -8.7 ° C. To this is added the thermal sensation, that is, the temperature perceived by the exposed skin. The thermometer can mark a morning -12 ° C, but it is possible that with the wind and humidity you have a feeling of -20 ° C. In turn, the city receives about 2.6 meters of snow annually. In spite of that, Démontagne ensures that “80% of cold days” pass on pavement.

The group that Démontagne created on Facebook disseminates information on the best routes to follow, organizes events and advises the neophytes. The network of bike lanes Montreal has an area of ​​800 kilometers between April 1 and November 15. The rest of the year, parts of the circuit suffer closures due to winter. However, the city authorities have paid special attention in recent years to keep the bicycles rolling in the cold. Currently, 75% of these roads (575 kilometers) are open during freezing periods.

Montreal has Bixi, a bicycle rental system in high demand, but does not operate during the winter. As the normal bicycle is not suitable for snow, the most common for cyclists is to adapt the one used during the hot months, acquire another especially for use in cold climates or buy an old unit and incorporate what is necessary.

Hugo Roy opted for this third option. Professor of literature at a school in Montreal, Roy proudly defines himself as a winter pedaling fan. “I go to work every day by bicycle and I always look for any kind of pretext to use it at that station,” he says. At each exit wears a helmet and lenses for alpine skiing, gloves and other clothes to keep warm. Most cyclists in the cold months, he adds, benefit from the grip provided by the special high wheel lugs. It is important to have fenders, he says, and a light that allows motorists to distinguish the bicycle.

Roy points out that sometimes he hesitates to pedal when temperatures drop dizzily. “The cold It is not the problem. Actually, I feel warm for being well sheltered and making a physical effort like the one required. My reservations have more to do with motorists, since an ice sheet can form on the pavement that makes it difficult for them to brake or turn the steering wheel accurately, ”he says.

The use of the bicycle in winter is gaining more and more followers in Montreal. Although not everything is joy. Some comments on social networks and in newspaper columns say that it is a very dangerous activity. “In my years as a cyclist, I have seen more accidents in summer than in winter. People take their precautions, are well equipped, show caution and have a long-standing relationship with the bicycle, ”replies Démontagne. “There is also increasing awareness among motorists.”

It’s the third year that Roy drives his bike in the cold. He confesses that he did not know the group “Vélo d’hiver-Montréal” because he does not use Facebook, but now he follows him on Twitter. “I am interested in sharing my experiences with them, giving and receiving advice. There is one thing that I appreciate when traveling by bicycle in winter: we spend a lot of time locked up and, thus, I get more motivated to work after pedaling. The endorphins act. ”