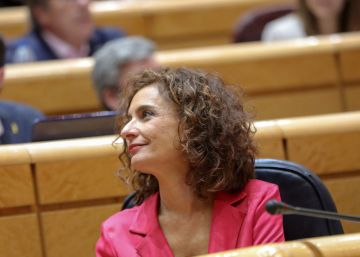 The Minister of Finance and Government spokesperson, María Jesús Montero, said Wednesday in Congress that the new taxes on financial transactions and digital services, commonly known as Tobin rate Y Google rate “They are ready” and will be approved “in the next Councils” of Ministers. Asked in the halls of Congress about the processing of these bills that the Executive contemplates to approve, the head of the Treasury has affirmed that both laws have already completed their public hearing phase and “have passed the entire procedure”, as well as the new law against tax fraud.

Montero, who has come to the lower house to attend the first session of control to the Government of the legislature, has declined that yes, determine a fixed date: “I do not know, because the planning is dynamic,” he replied. Montero had already decoupled the approval of these taxes on the Budget calendar on Tuesday, which the minister hopes will come into force this summer.

The tax on financial transactions and the Google rate These are the two fiscal developments that have the highest income – in addition to the corporate tax rate revision – they will contribute to public coffers, according to Executive estimates. According to the Stability Plan last April, the Tobin rate would provide an additional 850 million euros to the Treasury; the Google rate up to 1,200 million. Income that is made even more necessary given the forecast of economic slowdown expected for this year.

The Government of Pedro Sánchez has already presented these two taxes before the Cortes before being put on duty by the early call for elections, but both bills declined due to the dissolution of the Chambers.