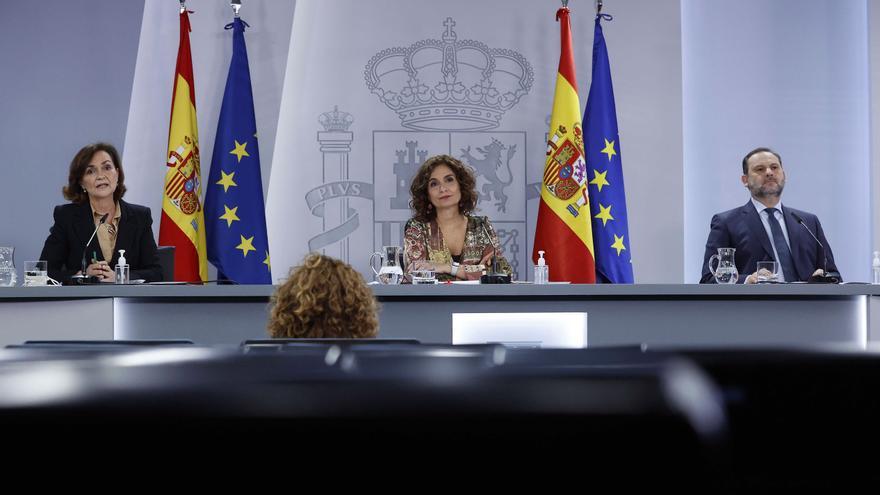 The socialist part of the Government try to placate for now the debate on the rise in the Interprofessional Minimum Wage for which Unidos Podemos is committed and whose negotiation has been launched by the Minister of Labor, Yolanda Díaz. The spokesperson and Minister of Finance, María Jesús Montero, considers that this is not the time to undertake this increase given the “economic situation” left by the COVID-19 pandemic and its “uncertainty” and has defended that this possibility be reconsidered in the second half of 2021, when the outlook is clearer thanks to the vaccine.

“We cannot ignore the economic situation our country is experiencing as a result of the health situation,” Montero said at the press conference after the Council of Ministers meeting, in which he recalled that the next semester will still be plagued of “uncertainty” due to the restrictions that have to be undertaken by the circulation of the coronavirus. That is why it has been in favor of acting with “prudence” and postponing the rise in the minimum wage, which is on the table of social dialogue. The unions are in favor of the freeze while the unions are betting on an increase of between 1.8% and 5%. In full division of the Executive, Labor has not yet made a formal proposal.

The socialist part of the Government has been planted this time under pressure from United We Can and opens a middle way that is to “re-evaluate” the situation in the second half of 2021. “If at this time we are not in a position to make a certain forecast of what will happen next semester we have the possibility and the opportunity that it can be reevaluated from the next semester that we hope that the vaccination has reached a sufficient coverage of the population and we will be in a better position to be able to determine how the next semester will be to be able to make the most correct decision in relation to this matter, “said the head of the Treasury.

Montero has defended the commitment of the Government of Pedro Sánchez with the increase of the lowest salaries -whose rise is a prerogative of the Executive of which he has the obligation to inform the social agents, although the Executive always maintains that he wants to do so as a result of the agreement- . “We have to act with political intelligence,” said the spokesperson, who assured that it is necessary to “pace” the “very serious moment that the productive fabric is going through” by making a “balance” with the commitments made for the legislature – that the SMI go up to 60% of the average salary in Spain- “pursuing that there is no destruction of jobs” while “accompanying companies in this difficult transit.”

The rise of the SMI is one of the latest conflicts within the coalition. However, the spokesperson has tried to reduce these tensions just on the day that what have been the sources of dispute in recent weeks were approved: the decree to stop evictions and the prohibition of cutting off electricity supplies, water and gas to vulnerable people. Montero has framed the discussions on the need for the initiatives to be approved with “all guarantees” and has ensured that whatever has to do with the pronouncements of a member of the Government “or the political forces that support it remain” a second plane. “” We are in the politics of things more than in things of politics, “said the minister, who insisted that the cabinet is” dedicated full time to solving the problems that citizens have in the day to day “, among which he has given as an example housing, concern about leaving the ERTE, the stability of his work environment, etc.

The spokesperson appeared with the first vice president, Carmen Calvo, and the Minister of Transport, Mobility and Urban Agenda, José Luis Ábalos, to explain the details of the anti-eviction decree. In parallel, the vice president of Social Rights, Pablo Iglesias, has published a video on his social networks in which he has also explained the approved measures.

Asked if the pressure of the minority partner of the coalition makes the Government move forward or backward, Montero replied that the Executive is “working on the commitment” to economic recovery “regardless of whether or not someone becomes the father or mother of a child. a certain idea or that some sector criticizes or may contribute to the Government to continue advancing in such important sectors so that no one is left behind. ”

At that point, Calvo intervened: “The work of a government is choral. Very rarely is there an element of the government that is the product of a soloist situation.” The first vice president has assured that in the normal operation of any Executive, even if it is made up of two parties, it is “almost impossible to find” a measure “that is from a single area.”