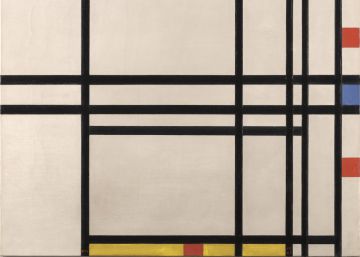 In 1905 Piet Mondrian He is in Amsterdam and enters a retrospective exhibition of Vincent Van Gogh, who died five years earlier. He is impressed by the use of color and brushstroke. He is also a good letter writer and says that the first time he saw his work he admired him for the desire to escape from a literal vision of reality. Van gogh he had been able to shift the horizon of the painting, challenging and pushing the limits imposed by resignation. At that moment the young Mondrian learns something for the mature Mondrian: another world is possible if he is able to break through the prisons of the possible. He loses his fear of utopia and of resisting the reality that was affirmed as unique. After making a few nocturnal landscapes in the expressive way of Van Gogh, he abandons these formulas: “He had to find the true path alone,” Mondrian writes, recounting his journey towards abstraction, which he reached a decade later, at the time that Kandinsky . Both did it ten years behind the Swedish painter Hilma af Klint, the unrecognized pioneer.

Mondrian did not want to live in the prison of particular feelings, he intended the expression of a language common and accessible to anyone: “Although I was fully aware that we could never be absolutely ‘objective’, I felt that one can become less and less subjective, until that the subjective no longer predominates in his work. More and more I excluded from my painting all the curved lines, until finally my compositions consisted only of vertical and horizontal lines ”, the painter wrote. It was his landscape, another possible world. And he raised him in Paris, in his studio in Montparnasse, when the First World War ended, in which he did not participate. Since 1921 empty and white planes appear, combined with the primary colors, and with the thick black lines that divide the canvas into rectangles of all sizes. In them the superfluous had no gap, only beauty, simplicity and balance. “Even the paths of art renewal lead to its annihilation,” he said. And he struck down naturalism, symbolic expressionism, broke with Braque and Picasso, and left the De Stijl group because his partner Theo van Doesburg had the idea one day to make a curved line. Europe was exhausted for Mondrian.

What he points out in Paris he finishes off in New York, from 1940. He arrives at 68, fleeing from the Second World War, and in Manhattan discovers a city that is revealed to him as the perfect manifestation of the “new life” (modernity ) and his painting is revolutionized, it becomes less obvious, it breaks stability, it becomes unbalanced. Hear the boogie-woogie jazz. He not only painted it, he also danced it. Lee Krasner remembered him as a brilliant dancer. “I considered the intentionality of the authentic boogie-woogie as identical to mine in painting: destruction of the melody, which is equivalent to the destruction of pure media, that is, dynamic rhythm, “he said. In Abstraction (1939-1942) –conserved at the Kimbell Art Museum, in Fort Worth (Texas)– Mondrian achieves dynamic sensation when he removes black lines and introduces others of various colors (red, yellow, blue and never, never, green). The death of art was to be the expression of his ultimate victory in the new city.

Virtual visit: Abstraction (1839-1942), by Mondrian, preserved at the Kimbell Art Museum (Fort Worth, Texas), in Google Arts and Culture.

The social outbreak in Chile, King of Spain award for Digital Journalism