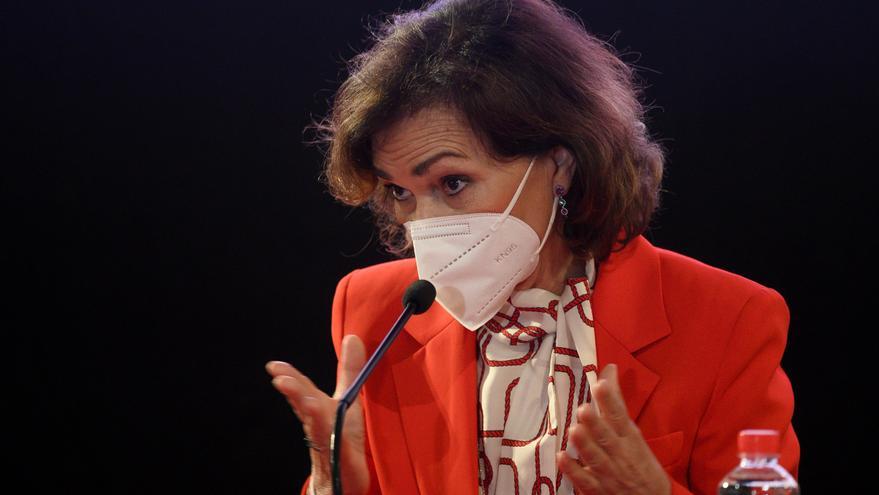 There are advances, but the entrenchment persists with the added pressure that LGTBI Pride is approaching. This time It is Moncloa who assures that the LGTBI legislation is ready for its part to start the process to approve it in the Council of Ministers and the Ministry of Equality [que lo intentó ya hace tres meses con un borrador del que de desmarcó la vicepresidenta primera, Carmen Calvo] the one that ensures that there is no agreement closed. Despite the progress in the negotiation between that department and Justice, is a still latent conflict. While the socialist part of the Government maintains that there will be a single LGTBI law that will include an important chapter dedicated to transsexuality, Equality insists on two differentiated laws, as stated in the programmatic agreement of the coalition. In addition, the department of Montero insists that the legal change of sex of transsexual people is carried out only through their "express declaration" while the party of Pedro Sánchez defends that it is necessary to give "legal guarantees" to the administrative process through the inclusion of witnesses.

"We are ready to start the process next week," say sources from Moncloa, who consider that the advances that have been made between Justice and Equality allow us to speak of a "principle of agreement" so that the LGTBI regulations pass through Committee of Secretaries and Undersecretaries chaired by Calvo next Thursday. This is the first step for the issues to be approved by the Council of Ministers. These sources also affirm that it would be a single LGTBI law, as the PSOE has defended in the negotiation and before the groups. The intention is, therefore, that the draft is approved on June 15.

However, in Equality they emphasize that the conditions are not met for the legislation to be approved and they insist that they are two different laws. "There are meetings and a great effort is being made by the Justice and Equality teams to have the Trans Law and the LGTBI Law before Pride as the Minister of Equality said, so that it goes as soon as possible to the Council of Ministers, although there is still no date because the agreement is still being worked on, "they explain in that department.

In the socialist part of the Government they cling to the fact that Montero accepted that there was a single law when the groups tried to find an intermediate solution by proposing that United We accept to merge the texts and that the PSOE assume free gender self-determination. But in Equality they remember that the minister yielded as long as the part of the legal change of the sex of transsexual people was approved in the terms proposed by her ministry and the groups.

This is where the main stumbling block is. Beyond depathologizing transsexuality by eliminating the medical and psychological reporting requirements that transsexuals are now required to change their sex in the Civil Registry [en lo que están de acuerdo las dos partes], Equality wants it to be carried out simply with the "express declaration" of the person concerned, as it appeared in a proposal promoted in Congress by the PSOE in 2017 and that was about to be approved.

However, the socialists have changed positions since then and consider that it is necessary to introduce any requirement in the administrative process, which they compare with weddings in which the signature of witnesses is necessary. "The freely expressed will is recognized in the Registry," they explain in Moncloa, where they assure that the minority partner "found that quick procedure good. These sources show their "absolute perplexity" that Montero once again spoke of "two laws", which they now consider to be the "stumbling block."

However, Montero has always said publicly that his proposal is the free self-determination of gender without requirements and in Equality they assure that in the negotiations with Justice they were working with two different projects. "Equality does not want to enter into intoxications that come from outside the negotiations to preserve the negotiation with Justice," they assure from the Montero ministry about the pressure from Moncloa to take the initiative to the Council of Ministers.

Equality and Justice have intensified negotiations in recent weeks before the proximity of LGTBI Pride. For the PSOE it is important to arrive with this matter settled on that date [finales de junio] fearing that the demonstration will turn against the socialists. About 70 associations asked COGAM and the FELTGB not to invite Sánchez's party to the mobilizations.