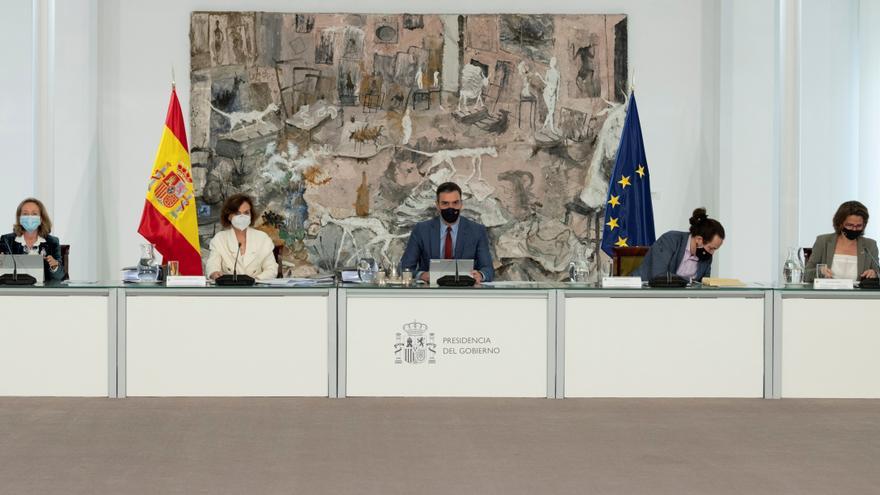 Moncloa has already prepared the decree with which it intends to manage European funds. The draft has already passed through the General Committee of Secretaries and Undersecretaries, which is the preliminary step for the Council of Ministers to approve it, and creates the structures to channel the 140,000 million that will arrive from Brussels in the coming years. The approval and direction of the Recovery and Resilience Plan will fall to an interministerial commission created for this purpose and of which ten ministers will be part who, according to the draft, have a greater implication in the management of the funds: the economic vice president, Nadia Calviño; that of Ecological Transition, Teresa Ribera; that of the Treasury, María Jesús Montero; that of Education, Isabel Celaá; or Health, among others. Of the United Podemos quota, only that of Labor, Yolanda Díaz will be present, and the Vice President of Social Rights, Pablo Iglesias, who trusts that that decision will be corrected, will be left out.

Sources around the second vice president admit discomfort over this decision to leave Iglesias out, who has among his powers the social policies of the Executive as well as those related to the 2030 Agenda. However, they assure that it is a matter that he has already addressed with Pedro Sánchez and that he has the “commitment” that he will be represented on the commission that will direct the recovery plan. The commission will be chaired by Sánchez, who may participate when he deems it appropriate, and in addition to the aforementioned ministers, also will be part of Agriculture, Luis Planas; that of Science, Pedro Duque; that of Transport and Urban Agenda, José Luis Ábalos; that of Industry, Reyes Maroto; and that of Social Security and Inclusion, José Luis Escrivá. They will also be part of second echelons, such as the Secretaries of State for the Economy and Business, Budgets, Finance and the person in charge of the Department of Economic Affairs and G20 of the Presidency of the Government, Manuel de la Rocha, “who will act as secretary of the Commission”.

In addition to the commission, it will also be in Moncloa where the implementation of the recovery plan will be monitored, which aims to have public-private collaboration. There will be a specific committee that will designate, in turn, the Commission for Recovery, Transformation and Resilience that will be in charge of providing assistance and technical support, according to the decree, advanced by Cadena Ser. In addition, it will be in the presidency of the Government where the unit for monitoring the plan is centralized. The relationship with the different public-private actors will be carried out through the creation of “high-level forums and councils”.

The decree also seeks to streamline the processing of European funds “which makes it necessary to review the existing obstacles and bottlenecks in the regulations and in public management procedures and instruments and, once analyzed, it is necessary to undertake reforms that allow for a modern and agile administration capable of responding to the challenge posed by the implementation of projects linked to the funds of the European Recovery Instrument “, according to the explanatory memorandum. The purpose is to eliminate administrative obstacles, as Sánchez announced at the La Toja economic forum last October.

The intention is that funds can be advanced to the projects “prior to the execution and justification of the benefits provided for in this type of business, reaching up to fifty percent of the total amount to be received”, stipulates the decree law. In the case of those Strategic Projects for Economic Recovery and Transformation (PERTE), which are those that will be channeled through public-private collaboration, the advance can be up to 90% when understanding that it represents a “risk” for the companies. PERTE will be considered “those projects of a strategic nature with great dragging capacity for economic growth, employment and competitiveness of the Spanish economy, which require public-private collaboration due to the presence of significant risks that hinder private initiative”, pick up the eraser. It will be the Council of Ministers, at the proposal of the corresponding department, which declares which projects are considered PERTE.

The intention of the Government is to have a good number of entities that are involved in these PERTE. Thus, the Ministry of Industry will create a special registry of these entities, which will be public or private and “will have a preferential character to form part of consortia created by the Public Administrations.”