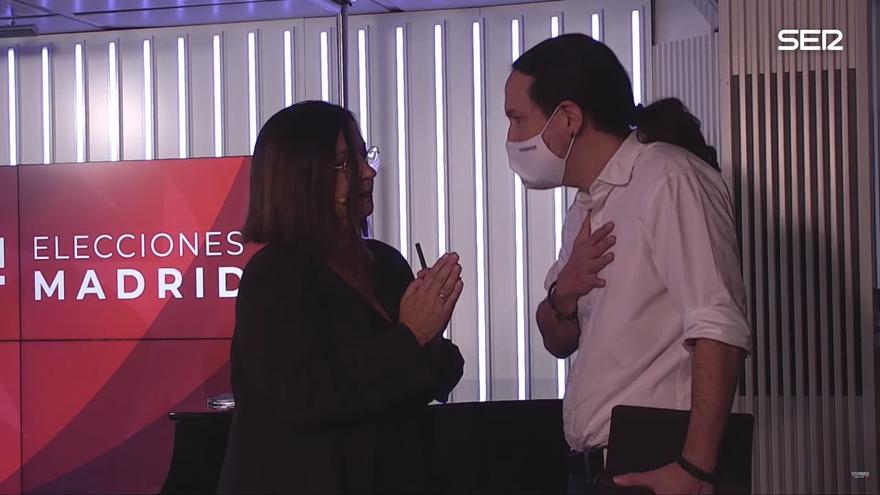 The United Podemos candidate in the Madrid elections, Pablo Iglesias, has abandoned the debate organized by the Ser chain in the presence of the Vox candidate, Rocío Monasterio, who has questioned the veracity of the death threats this morning directed against Iglesias, the Minister of the Interior, Fernando Grande Marlaska, and the director of the Civil Guard, María Gámez.

Iglesias has demanded at the beginning of the debate that Monastery retract his words. This morning, in an interview in RNE, the Vox candidate said: “We Spaniards no longer believe anything about the Government, they have deceived us from the beginning of the pandemic over and over again, deceit after deceit, we are tired of them cheat systematically “. And he added: “I don’t believe in Pablo Iglesias, every time we see something that Pablo Iglesias says, we question him, he has deceived us.”

The United Podemos candidate had already warned this morning in an interview on TVE that he was not going to “share spaces” with a party that does not condemn “terrorist threats.”

Monastery has refused to recant, so Iglesias has stood up. The leader of the debate, Ángels Barceló, has tried to make him stay, but the United We Can candidate has left the study while Monastery told him “get out.”

“I encourage you to go to a police station to report these threats,” Monasterio said. “If you are so brave, get up and get out. Get out, that’s what many Spaniards want. Get up and get out of here!”

“I’m glad, off the set and out of politics,” Monasterio snapped.

Despite Barceló’s attempts to get Iglesias to stay in the debate, in which Monastery has continued, Iglesias has abandoned the study. The rest of the candidates have criticized that Monastery has not retracted its words, as well as the ways in which it has refused to do so. “Can’t you do something worthy for once?”, The More Madrid candidate, Mónica García, has questioned him.