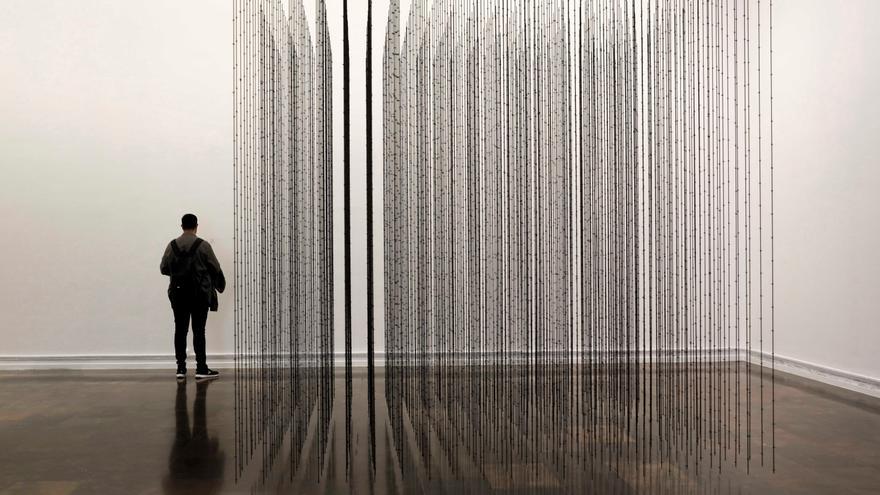 Valencia, Apr 15 (EFE) .- The artist and sculptor of Palestinian origin Mona Hatoum exhibits from this Friday at the IVAM a selection of her works, with which she seeks to involve the viewer and confront him “with that feeling of uncertainty that surrounds us” , and with the violence and fragility of an unstable world.

This is how Hatoum has raised it during the presentation of the exhibition, in which this artist, the Julio González 2020 Prize winner, has participated electronically -residing in London since 1975-, and has thanked the Valencian Institute of Modern Art for its perseverance in maintaining this exhibition “so exhaustive” of her work that she herself thought of delaying due to the pandemic.

The exhibition, which can be seen until September 12, presents 31 works including sculptures, drawings and large-format installations, in which conflict, violence and threat underlie, without losing the beauty and attractiveness along with the political and social gaze of an artist who addresses the complex geopolitical situation and territorial conflicts in the Mediterranean.

Hatoum focuses his interest on the creation of pieces that, despite their simple and reductionist form, emotionally and psychologically impact the viewer, and are endowed with an ambiguity and ambivalence that allow diverse and even contradictory readings.

As soon as they enter the exhibition, the visitor comes face to face with “Bunker” (2011), an installation made up of eight imposing modular mild steel structures, whose cuts and burns emulate the scars left by the Lebanese war in Beirut, place of birth of the artist in 1952.

These structures, empty and in ruins, recall this armed conflict that “so affected the physical reality and the collective psyche of the city,” Hatoum explained.

The conflict and the threat are also present in other works, such as “Hot Spot” (2013), a large stainless steel globe in the shape of a cage, on whose surface red neons trace the silhouette of the continents.

The work, which gives off an energy that attracts and generates the sensation of danger at the same time, suggests that the current hot spots of conflict are not limited to border disputes in specific areas, but that the entire planet is in danger due to the emergency climatic, the artist has indicated.

The Palestinian-Israeli conflict also has space in works such as “Present Tense (1996-2001)”, in which on some square blocks of soap, made with olive oil from an area of ​​the West Bank, there are drawn, with glass beads, a fragmented map of the 1993 Oslo Peace Accords.

The exhibition also presents a series of key works dedicated to maps, among which “Map (clear)” stands out, a work created for this exhibition consisting of a large extension of transparent glass marbles that are not fixed to the ground. which gives the work great instability and vulnerability.

In several pieces, the presence of furniture and other types of household utensils, altered or increased to reach surreal proportions, also stands out, which give the pieces a threatening, malevolent or hostile character, as can be seen in “Quarters” (1996), “Paravet “(2008) and” Daybed “(2008).

The latest installation, “Impenetrable” (2009), shows a large cube measuring three meters on a side, formed from barbed wire rods, suspended from the ceiling with an invisible support, which leaves the installation in “a precarious suspension” .

With it, Hatoum contrasts an apparently delicate, light and transparent structure with the image associated with war, the restriction of movements and the borders represented by the barbed wire, also present in other pieces in this exhibition.

During the presentation, the artist highlighted that precariousness, of the individual and of Humanity, are very present in her work, since it seems that “we want to live without realizing” it, and that is why she confronts the viewer “with that feeling. of uncertainty that surrounds us “and that the pandemic has made more evident.

And it is that the viewer is the protagonist in the work of this artist, who went from using her body in the 80s to make political and social criticism, to replace it with that of the viewer, whom she invites to interact with her works, experience the effects of the environment and generate their own interpretation.

The director of the IVAM, Nuria Enguita, has assured that this is “one of the great exhibitions of the year” for the museum, while the curator of the exhibition, the former director of the museum José Miguel García Cortés, has highlighted “the great coherence and honesty “, both personal and artistic, of Hatoum throughout his career.