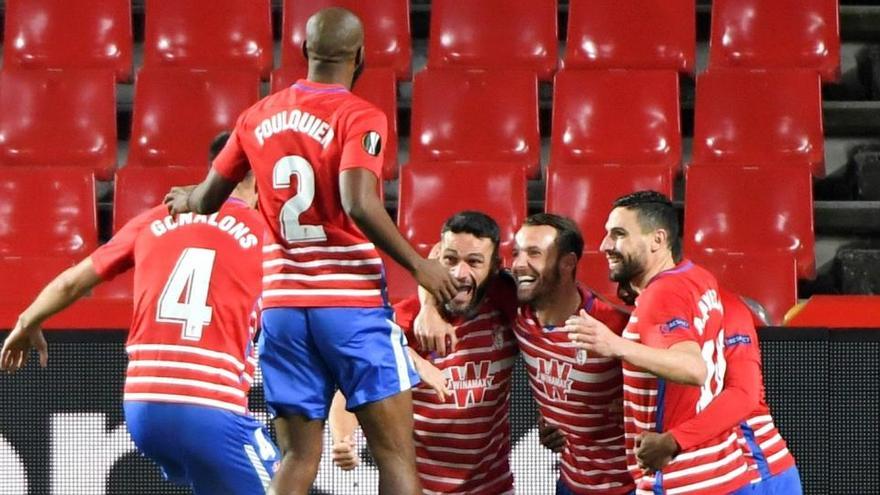 A goal from Jorge Molina in the first half and another from Roberto Soldado in the secondThe latter, when a limited but very incisive Molde was already outnumbered by the expulsion of Martin Ellingsen, gave the victory of a Granada that made a great effort when facing the crash with many casualties.

The Granada, who faced the crash with thirteen absences, came out very well to the game and accumulated several dangerous arrivals in the first quarter of an hour thanks almost always to the Brazilian Robert Kenedy, very active and who after three minutes already put the Swedish goalkeeper Andreas Linde to the test.

In set pieces, Argentine Nehuén Pérez, Portuguese Domingos Duarte and Jorge Molina also had their options before a timid Molde at the beginning and something more animated in attack as the minutes passed.

Linde made her first big stop of the night before a Soldier header, shortly before Jorge Molina scored 1-0 in the 26th minute.

The veteran attacker beat the Swedish goalkeeper hand in hand after taking advantage of a chain mistake from the Norwegian defense after a long serve from the Portuguese goalkeeper Rui Silva.

El Molde, who took a step forward after 1-0, reacted with a header after a corner kick by Icelander Bjorn Sigurdarsson who found no goal.

The Norwegians, led by Magnus Eikrem, they fenced off the rojiblanca area in the final stretch of the first half, although they did not force Rui Silva to make any stops.

The rhythm of the game dropped in the second half, something logical due to the fatigue and limited numbers of the locals and because Molde is in preseason.

Rui Silva had to intervene for the first time against a long shot from Martin Ellingsen, shortly after Eikrem finished with a bad shot a good visitor arrival.

El Molde, increasingly dominating against a Granada that made the game long, forced Rui Silva to show off on a direct free kick taken by Eikrem.

The Granada forgave the 2-0 twice, first in an individual action against Antonio Puertas who saved Molde’s rear in extremis and, shortly after, with a good save from Linde to a far shot from Soldado.

The game became more expensive for the locals when the Norwegian Martin Ellingsen saw two yellow cards in just four minutes, with which the Molde was the last quarter of the clash outnumbered.

Granada did not take long to take advantage of this circumstance, since Soldado scored 2-0 in the 76th minute with a great volley after an assist from Jorge Molina.

The locals dominated until the end, trying not to lose the ball to keep their goal at zero and without giving up on increasing their income, something they were about to achieve with a Kenedy’s header against which Linde excelled.

Incidents: First leg of the Europa League round of 16 played at the Nuevo Los Cármenes Stadium behind closed doors.