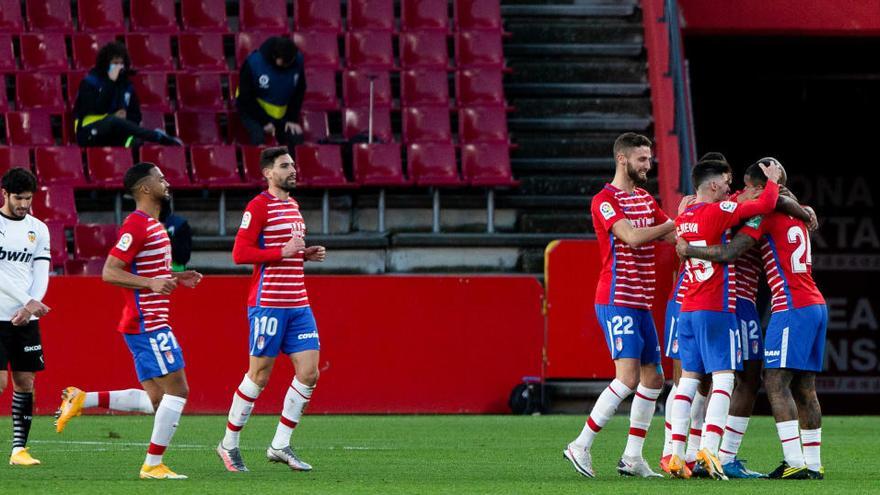 He Pomegranate put the icing on the sensational 2020 that he has signed by winning 2-1 in the last game of the year at the Estadio Nuevo Los Cármenes at Valencia, what finished with nine players, due to the expulsions of Jason and Guedes, and his problems aggravated by stalling in the lower zone after seven games without winning.

A goal by Frenchman Kevin Gameiro in the 36th minute allowed the visiting team to go ahead on the scoreboard, the Brazilian Robert Kenedy tied at the edge of the break, while Jorge Molina finished the comeback and left the victory at home with a header in the 88th minute.

The crash was conditioned because the Valencia juice from minute 72 with nine footballers being sent off in just two minutes David Remeseiro ‘Jason’ and the Portuguese Gonçalo Guedes, while the locals were left with ten in the 77th minute for the red to the Portuguese Domingos Duarte.

He local team commanded in the first section of the crash, betting on the important casualties with which he faced the crash for a direct game that put the Valencian rear in trouble several times.

After a couple of notices from the Colombian Luis Suarez, after a quarter of an hour, Kenedy scored with a strong kick from afar, but the Cantabrian referee Cordero Vega annulled the goal, at the request of the VAR, for a foul at the start of the play by Frenchman Dimitri Foulquier.

Valencia grew as the minutes passed, with very dangerous counterattacks and Gamiero’s mobility continually bothering the rojiblancos. The Portuguese Rui Silva appeared with success before José Luis Gayá, Gameiro himself and Guedes, while Jaume Domenech made his debut before a shot with little angle from Kenedy.

Gameiro scored 0-1 in the 36th minute after a good send to the far post by Russian Denis Cheryshev in an action much protested by the Andalusians as they understood that Luis Suárez was fouled at the beginning of it, although this time neither the referee nor the VAR saw an infringement. When the break was already looming, Kenedy tied in one of the last plays of added time with a direct free kick that hit the barrier to throw Jaume Domenech off track.

He Pomegranate started again better in the second part, with two very clear chances by Luis Suárez, both of them marred by not finding a goal with their shots. After a header outside the French Eliaquim Mangala in the other area, the Pomegranate to touch the 2-1 with a shot from Foulquier that was cleared between Jaume Domenech and the post.

In two minutes, between 70 and 72, Valencia’s life was complicated to the fullest when Jason was expelled, who had a yellow and saw the second for kicking the Portuguese Domingos Duarte without the ball, and Guedes, who saw the direct red for protesting the referee.

Far from taking advantage of this situation, the Domingos Duarte made the Andalusian team stay with ten players in minute 76 when they saw the direct red after an ugly tackle on Manu Vallejo.

The only one who had things clear in a crazy and uncontrolled end of the game was Jorge Molina, who was about to score in a shot that he took down sticks his own teammate Alberto Soro, but who in the 88th minute made it 2-1 with a great header after a pass from Alberto Soro himself.

Incidents: Match corresponding to matchday 16 of The league Santander played at the Nuevo Los Cármenes Stadium in Granada behind closed doors.