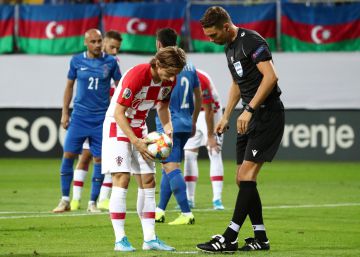 On July 14, six days after the Real Madrid squad concluded the summer vacations and returned to work, the first medical part of the season was published on the club's website. At that time I was referring to Brahim (left femoral biceps injury), which, without knowing it, was going to inaugurate an unprecedented casualty sequence, and which increased this Thursday with the incorporation of Luka Modric (muscle injury in the adductor of the right leg). The Croatian half, 34, is the ninth footballer of the first team to visit the infirmary in the eight and a half weeks of activity registered so far this season.

After Brahim, Asensio (rupture of the anterior cruciate ligament and the meniscus of the left knee), Jovic (injury to the left ankle), Mendy (muscle injury in the anterior rectus of the right thigh), Courtois (grade II sprain in the left ankle ), Rodrygo (lesion in the right femoral rectum), Hazard (lesion in the anterior rectus of the left thigh), James (muscular injury in the right soleus), Isco (muscular lesion in the right femoral biceps) and Modric have suffered some setback physical when only three league games have been played. This situation directly compromises the work of Grégory Dupont, physical trainer of Madrid since the departure of Antonio Pintus, and who came backed by his work in the French national team and with the direct approval of Zinedine Zidane.

"The injuries worry me, but they are things that happen to all the teams." This is how Zizou in Vila-real referred to the sequence of setbacks that have hit the locker room, and that with the loss of Modric now shakes the team's less reinforced line, the center of the field. The departures of Kovacic, Llorente and Ceballos have further reinforced the presence in the eleven holder of Kroos, Casemiro and Modric, which have the only competition of Valverde, used by Zidane as a replacement for any of the three. Without the Croatian, the passage of three to four midfielders seems the most plausible solution against Levante on Saturday (13.00, Movistar LaLiga), and against PSG next Wednesday in Paris (21.00, Movistar Champions League) at the premiere in Europe. This formula was used by Zidane in the last match against Villarreal, and in two of the five preseason games.

Fortunately for the French coach, Hazard and James trained normally yesterday in Valdebebas, and will be available for the commitment of Santiago Bernabéu. To align the Belgian in attack, it would be his first meeting in the national championship after having dropped against Celta, Valladolid and Villarreal. Hazard in the field will not coincide with Bale, author of a double in La Cerámica before being expelled, and still oblivious to a nurse he knows well (in the last season he remained 45 days off and missed eight games, one more than Sergio Ramos, next on the list).

Those who did not train with the group were Casemiro, Vinicius Jr. and Militão, back after being summoned with Brazil, the latter being the only one incorporated during the transfer market that has not caused casualty due to injury so far. Militão, in addition, will have to start from the beginning before the PSG, since both Sergio Ramos and Nacho will cause cancellation for penalties that lead to the last edition of the Champions League.

With five points in three games and a little stimulating staging, the injuries further compromise the performance of a brittle Madrid. The apparent resignation of Zidane overlaps a problem that exposes the shortcomings of a workforce that cannot be patched until December.