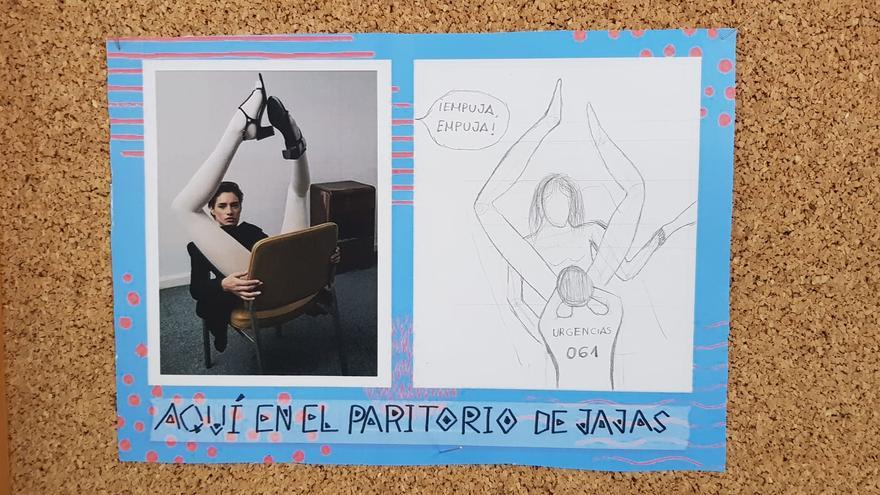 Internet culture strives to illustrate the famous butterfly effect, generating stories that travel between the networks and the street, connecting events born to have nothing to do with each other. This is the only way to explain that a car incident that occurred in Huelva in July 2020 gave rise to a humorous account on Twitter and Instagram that a year later has ended up inspiring an exhibition on the occasion of 25N, International Day for the Elimination of Violence against Women. Women, in an Institute of Cabezón de la Sal, in Cantabria.

Laura, who prefers to maintain a discreet position and not give too much information about her identity, experienced an unpleasant situation last year. He was about to get into his car, parked on the street, when he came across something unexpected. "I was pissed off because they hit me in the car and they hadn't left a note," commented in an interview. In understandable frustration, he went home and, to try to vent, he rambled on the internet. And there it occurred to him to create an account on Twitter. This is how it was born Models with sciatica.

He kicked it automatically. Almost 20,000 followers in a week. Laura published four or five daily contents. The butterfly's flapping had already begun. The virality generated media attention and clarified in almost all the interviews the fundamental principles of her experiment: that she is not professionally dedicated to fashion or digital marketing and that her intention was to make white humor. "I try to be fine humor and not offend anyone, neither the model nor the photographer", said.

Laura has continued to fuel her digital creature on Twitter (with nearly 70,000 followers) and Instagram (with nearly 30,000) throughout this year. He confesses to elDiario.es that he continues to publish due to the community that has been generated around the project: "I continue for the people. They have made the account great. They maintain a beastly respect for them. They take great care of all the messages, especially the private ones that me They send. Rare is the day that I do not have 10 or 20 messages on Twitter and some more on Instagram. I always try to answer all of them. " And suddenly one day, after that initial flapping and the subsequent flight, the perfect storm gives rise to what she considers something extraordinary that once again reveals the theses that insist on separating the analog from the digital.

"For me it has been tremendous", recognizes Laura. She had gone to lunch with some friends when she suddenly checked her email inbox and found a message from another Laura, which is also the name of the teacher who wrote to her: "When I saw Laura's email, I said "Jolín, how cool, how well he has understood the account." And how well it is used for that. Because it is true that although the account is humorous, behind it there is a background that is to try to criticize a little the hypersexualization of women in the fashion world".

Laura Álvaro is the teacher who wrote the email. He tells elDiario.es that it has been a combination of inspirations. "The account of Models with sciatica I've known her for a long time. The idea of ​​using it came from a fellow teacher who told me that she was going to do a similar project but with classical culture. Her students, who are also all girls and in the 2nd year of high school, were going to use female nudes from different periods in art history and then print and dress them with protest t-shirts in the style of Yolanda Domínguez. Then he told me that if it occurred to me in Plastics to do something a little parallel to make a joint exhibition. And just because of Yolanda Domínguez, a video about children and fashion came to mind, "she says, explaining the origin.

In fact, there are many similarities between Domínguez's video and the Models with Sciatica account. Laura Álvaro simply joined the dots: "It occurred to me to do something for the 25N about how sometimes women are distorted in fashion images, especially hypersexualized or ridiculed. And how we wanted to do things that could be exposed, the idea It was to put this video on them and then ask them to use humor, as in Models with sciatica, with templates in different scenarios in which they could propose a reasonable explanation for the position that each of the models had. "

Álvaro says that there have been reactions of all kinds: "My students are 15 and 16. Many reacted by saying that it is a bit violent to use a woman's body like this, but others said that perhaps that was not violence as such. We have used it to dedicate ourselves to debating what violence against a woman really is, against the image of her body and trying to discern to what extent this type of publicity can be denounced with which it uses women in a slightly degrading way ".

She also recognizes that in recent times the debate on feminism has become complicated in the classroom: "It is very polarized. It has been used a lot. Some interpret it in one way, others take it to other more radical extremes. It is very complex." . But she is clear about her position and how to introduce it in the classroom: "In my case I am quite a feminist and at the same time I try to empathize with visions of all kinds. Feminism is something that is worked on from all subjects, from tutoring, in primary, secondary ... And for me it is important to deal with it and even enter into fierce debates with the students. Still, it is worth it, because I am sure that many students come home and have at least given it a spin ".

And that's where humor comes into play. As a tool to deal with complex issues but also as a way to foster a critical spirit and the student's own voice. "Humor for the Plastic subject is even more useful as an expression tool, not only for them to receive messages through humor but also for them to generate them. And this in Plastic is what we do every day, trying to that they create their own language, that they are able to express what they think or think. In the end, it is a very useful tool that is not always used ", the teacher says.

Laura, the author of the account Models with sciatica, is delighted with this use: "I consider myself a feminist, I think everyone should be, but I am also aware that in this society we have to continue sharing life with people who do not understands feminism or does not share it. It is not in La Palma of my hand to change the world, but it is, at least, to try to move it a little bit. And that is what I intend with the account, to move it from humor. I love that this is used for that, for, to teach and for, to make us a little better ".

This is how a hit in a car ended up generating an exhibition in a high school on the occasion of the 25N. Or how two women who a year ago did not know each other at all have ended up collaborating, blurring the borders between digital and analog and putting at the center what they consider important: criticizing the image of women that is generated from the world of the fashion.