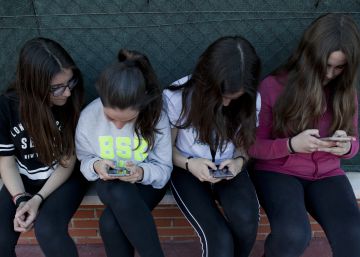 "It may be time for adults to stop discussing whether smartphones and social networks are good or not for teenagers' mental health and begin to find ways to support kids," says Candice Odgers, professor of psychology from the University of Irvine, (California). A team of researchers from this university has discovered that the use of smartphones It is not related to mental health problems in adolescents.

Researchers have not calculated the possible mental health problems in the brain. Rather, they asked teenagers about the perception of the symptoms of behavioral problems (for example, getting into trouble, lack of attention / hyperactivity, worry and depression). The study has been carried out through a method called Momentary Ecological Evaluation (EMA). Investigators they asked teenagers several times a day in short surveys delivered through a smartphone application.

The study measured teenagers' use of technology in several ways. In 2015, researchers asked more than 2,000 teenagers through a survey if they had their own mobile phone, as well as their access and frequency of use of social media. Made 400 teenagers follow up and two years later they were asked how many text messages they had sent, how much time they had spent each day using technology to do homework, for communication (on-line or by phone talking to others or sending messages), to entertain (browsing social media, watching videos, playing games) and creating content (publishing on social media, creating videos, etc.). The experts added the estimates to obtain a daily measure of the total time in front of the screen.

The result has been clear. "We have shown that having a phone, a social media account and the frequency of use of mobile resources are not related to mental health problems about two years later," says Michaeline Jensen, professor of clinical psychology at the University of Greensboro of North Carolina and author of the study. "The problem of the current use of mobile phones has nothing to do with the mental health of young people – and that of the rest of the population – but with the absorption of libido that this use implies, ”says Jose R. Ubieto, psychoanalyst and professor at the Oberta University of Catalonia (UOC).

There is no single cause of this type of mental illness. A person's mental health is determined by a series of complex and interactive factors throughout his life.

There is no single cause of this type of disease. The mental health of a person is determined by a series of complex and interactive factors throughout his life. “However, in recent years, the media have paid close attention to the idea that modern digital technologies (such as smartphone) may be related to the increase in adolescent mental health problems, such as anxiety and depression. This focus on technology, and fearful headlines that warn that time in front of the screen can cause depression or even suicide, has made parents and the public pay close attention to the role of mobile phones and other digital technologies, ”he says. Jensen

Professor Ubieto thinks we used to cover those needs with an ‘analog Instagram’.“The predigital WhatsApp was done by cable, two by two, and Tinder demanded the participation of intermediaries who carried the messages. It was not the same, but it satisfied the same passions. Narcissism is exacerbated today because gadgets They allow us the illusion of comforting ourselves. That does not only affect children and young people since these objects have not fallen from the sky, we provide them, adults, ”explains Ubieto.

The authors of the research believe that more data is needed on the role that mobile phones play in teenagers' lives. Some research suggests that many teenagers are using social media and the Internet in ways that help them feel better emotionally (for example, seeking social support). "We need more rigorous research on the possible disadvantages of a strong commitment to digital technologies, which could include potential impacts on health-related factors, such as sleep," says Jensen.

Parents should treat their children's upbringing around technology in the same way they would with any other adolescent behavior. “It's probably less important to chase and limit the amount of time in front of your teen's screen, and rather they should try to know more about what your child is doing in the spaces on-line. Today's parents have a great opportunity to get to know their teenager and their world better, ”says Jensen. "Many mothers and fathers are disoriented because it is a novelty and specialists do not stop saying things and often contradictory," says Ubieto. "It is not about prohibiting or allowing, rather than dosing," concludes the professor.