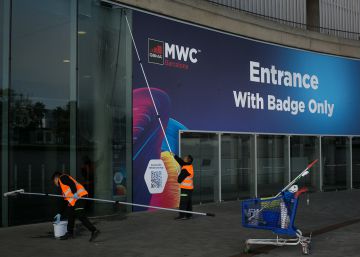 The fear of contagion by the coronavirus is about to twist the arm of the organizers of the MWC of Barcelona, ​​who have fought against all odds to keep the event alive in the face of the continuous bleeding of large firms that have decided not to attend the event most important technology in the world. Even some members of the organization doubt that it can be held until Friday to make a final decision. Last year 2,400 companies attended.

Yesterday, the coup came from the United States. The Cisco network company, Intel chip maker, AT&T and Sprint operators, and the social network Facebook announced that they were canceling their assistance. And even the Chinese mobile brand Vivo threw in the towel in front of firms in the same country as Huawei, which have only applied preventive measures for now. And so did the Taiwanese Mediatek, which manufactures processors for 5G, or the Canadian Accedian. The abandonment of AT&T has caught by surprise the management of the GSMA and can be the trigger to advance the decision on the cancellation to that planned before Friday, according to sources from operators who remember that AT&T is not only the first telephone company from the US but a relevant member of the GSMA board itself.

“As a precaution, Facebook employees will not attend this year’s Mobile World Congress due to the evolution of public health risks related to the coronavirus,” said the statement from Mark Zuckerberg’s company. This absence is especially significant and painful, since the GSMA has opted in recent editions to attract new technological stars from the web world, apart from operators and terminal manufacturers. And Facebook was a fabulous claim.

Given this situation, the GSMA council, the highest governing body of the association, will meet this Friday, day 14, to finally decide whether to cancel or postpone the congress. Sources of the organization explained that it is an ordinary meeting already scheduled that the management team maintains in all editions one week before the celebration of the fair, whose premiere is Monday, February 24. But other sources do not doubt that it is a key meeting, which will leave a final and clear decision on the continuity of Mobile.

The difficult balance of the operators

Operators as relevant as Vodafone or Deutsche Telekom have already shown that in these circumstances it is unfeasible and even counterproductive to move forward with Mobile. In the case of Telefónica, when acting as a hostess, she has been more cautious, because both the Government and the Generalitat de Catalunya support that Congress go ahead and they would look very badly at the announcement of a fright from the Spanish multinational. In the case of Orange, he just pointed out that for now he is moving forward, although stressing that “the health and safety of our employees is a top priority.” Orange’s CEO, Stéphane Richard, is the current president of the GSMA.

The GSMA council consists of 26 representatives of the main telecommunications operators such as Telefónica, Deutsche Telekom, Vodafone, Orange, AT&T, Verizon, América Móvil and the Chinese (China Mobile, China Telecom and China Unicom). Your position will be essential to resolve the final decision.

If the cancellation is finally decided, the cost will be millionaire. Only direct spending for participating companies (exhibitors, tickets to the MWC, travel, allowances, hotels and presentations) amounts to about 500 million euros, according to industry sources. One of the most expensive chapters is the rental of space in the Fira. One square meter of stand It costs around 1,200 euros, so that together the bill rises to 150 million. As an example, absent as Ericsson and Faccebok reserved 6,000 and 1,200 square meters respectively.

The cancellation also affects tickets for attendees, which cost between 799 and 4,999 euros, for the event held in two venues, the Fira Gran Vía and the Fira Montjuïc. Public subsidies would also be lost. Only the Ministry of Economy contributes five million euros to the lost fund each year,

It is not ruled out either that the GSMA decides a postponement to spring, which would allow a renegotiation of the reserves of spaces and infrastructure to lighten the huge bill that supposes the cancellation of the fair.

Pending the decision adopted by the GSMA, the workers continued yesterday with the assembly of the exhibitors and with the preparations of the fair. And both the central government and the Generalitat and the Barcelona City Council closed ranks and opted for the continuity of the event.

The Minister of Finance and Government spokesman, María Jesús Montero, requested that the reality of what is happening be properly dimensioned, in order to “not encourage a situation, in which disinformation prevents an adequate diagnosis and ends causing damage. “

The spokeswoman for the Generalitat, Meritxell Budó, recalled that there is “no recommendation by any health authority” that no major events such as Mobile are held, although he said that it should be the organizers who decide whether or not to maintain the event and not the Govern.

For his part, the King maintains his purpose of inaugurating the congress. Sources from the Casa del Rey say that the visit to the Catalan capital is still on the agenda and that at this time there is no reason to rethink it, reports Miguel Gonzalez