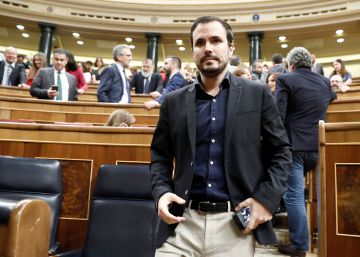 Consumption will gain weight in the new Government with the creation of a specific ministry, the first time it happens in democracy - until now it was within Health as a general direction. What challenges will the new minister face, which according to sources close to the negotiation will be Alberto Garzón? The main consumer associations ask the Executive to recover sanctioning powers - now in the hands of the autonomous communities - so that the department can fine companies that carry out massive fraud throughout Spain, clarify which vulnerable consumers need special protection, put in March a law of transparency in contracts and promote responsible consumption.

Rubén Sánchez, Facua spokesman, values ​​the new ministry as something very positive and asks to take the opportunity to advance in the defense of consumers: "It would not be logical to have a ministry with exclusive competition in consumption that will not develop effective policies." For that, he thinks, it is necessary that the Government can also fine. “The sanctioning competition in the area of ​​consumption is held by the autonomous communities and we ask that the powers be shared, that is, that the Ministry of Consumption can also sanction companies that commit fraud in several autonomous communities, such as large telephone companies, gas, electricity, banks ... ”, explains Sánchez. “As is the legislation today, if consumers suffer fraud, a file should be opened in each community, that is, 17 files. That is little operational and absurd. It would be more effective for the Ministry of Consumption to have that sanctioning capacity at the national level, without taking away the sanctioning capacity of the communities, ”he adds.

This change would require a reform of the General Law for the Defense of Consumers and Users, dating from 2007. Enrique García, spokesperson for the Organization of Consumers and Users (OCU), agrees that if the ministry regains the sanctioning capacity, it would be better to fight against national frauds. In addition, it requests the removal of the obstacles that collective actions encounter in order to bring this type of abuse to court.

While changing the law, Facua spokesman believes that the new minister should take advantage of the powers that the department already has to take legal action against abusive clauses. “The government can take this type of fraud to court, but it is not done. For decades we have seen how there are fraudulent practices of large companies and the government in turn did not act against them, ”says Sánchez.

The OCU asks to sanction the planned or surpassed obsolescence. "Manufacturers must be forced to report on the shelf life of the product and favor the most efficient alternatives to better use resources," says Garcia. The OCU also focuses on the need to define what a vulnerable consumer is, that is, one who, due to their economic capabilities, needs special protection. "That would allow establishing higher levels of protection and demanding specific requirements for contracts for these people," the spokesman adds.

Manuel Pardos, president of the Association for the Defense of Consumers and Users of Banks, Savings Banks and Insurance (Adicae), believes that "Spain can be at the forefront of consumer protection" if the new department manages to develop regulations in cross-cutting matters such as energy, banks, telecommunications, transport ... "First, the Agency of Protection of Banking and Financial Consumers, which should have been created in 2017 at the request of the European Union and we are still waiting, ”says Pardos. With this body, "it will be easier to fight against problems such as those in the ground or preferential clauses, which have affected hundreds of thousands of Spaniards." In addition, the president of Adicae asks to approve a law of transparency in contracts to clarify this type of documents and prevent abusive clauses.

The president of the Confederation of Consumers and Users (CECU)Itziar Marín, in turn, asks to change the regulations so that the resolutions of the different consumer organizations - state, autonomous and municipal - are binding. “If they cancel a flight for‘ overbooking ’and the State Air Safety Agency agrees with me, you can say that the company gives me the money back. But if the company refuses, I have to go to court to enforce my rights. To avoid this and make things easier, the resolutions of these types of organizations must be binding, ”says Marín. In addition, he believes that progress can be made in the regulation of consumer activities on the Internet: "Technology is going faster than regulation, so it must be continuously updated." In his opinion, the future minister has “to spare” powers: “food labeling, websites, product safety, promoting consumer protection, promoting arbitration…”. In addition, "greater coordination with the autonomous communities" is needed.

Another issue that will become more relevant will be responsible consumption. "Organic consumption has already become a vital issue for the whole society and can be promoted from the new department," explains Pardos. “A more rational type of consumption should be encouraged, but above all that consumers organize,” says Sánchez. In this sense, Concepción Fabeiro, president of the Spanish Society of Organic Agriculture (EEAS), believes that the ministry's powers should include "promoting and giving a lot of information to citizens about responsible, ecological, seasonal and local consumption," which should have the entities of the sector.

According to sources familiar with the negotiation, the Ministry of Consumption will incorporate powers to regulate the game and the bookmakers, which currently depend on the Treasury and they are largely transferred to the autonomous communities. Although it is not a classic consumer issue, consumer associations are in favor of greater regulation. "You have to end as soon as possible with the game announcements in children's hours, which are currently allowed due to lack of regulations," says Garcia, of the OCU. “It would be necessary to prohibit the publicity of the game at the same level as that of tobacco,” adds Sánchez. "It is essential that the sector is better regulated, which is ruining thousands of families, and that the kids are not a game room when leaving the institute," said Marin, CECU.