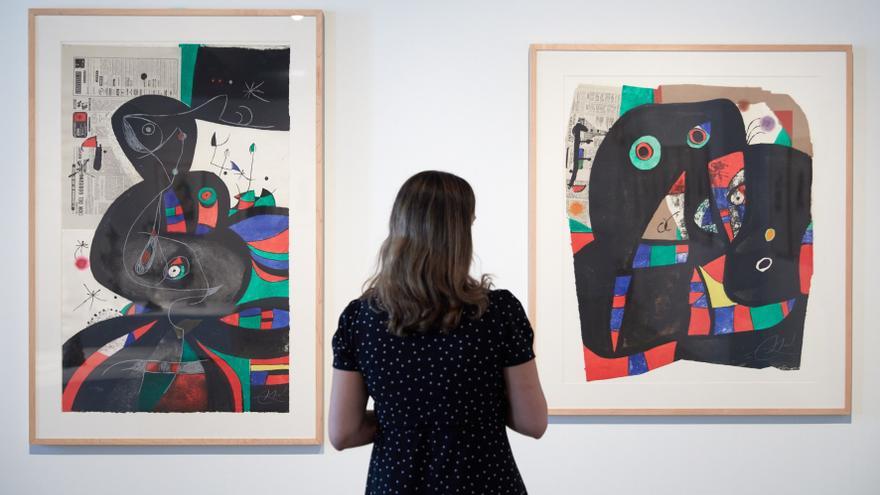 Palafrugell (Girona), July 22. (EFE) .- Two artists like Joan Miró and Antoni Gaudí shared creative affinities that the former always recognized in the form of admiration for the latter and which are evidenced in an exhibition that opens this Sunday in Palafrugell (Girona), which is “the most important “ever organized by the Vila Casas Foundation.

This was recognized this Thursday by the director of that institution, Àlex Susanna, during the presentation of the exhibition ‘Miró, Gaudí, Gomis. The magical sense of art ‘, which will host the Can Mario Museum until November 28 and which compares the work of both geniuses together with a selection of photographs by Gomis on the work of the architect from Reus.

Joaquim Gomis was the first president of the Joan Miró Foundation and the fund of this institution has served to create an exhibition that he co-organizes with Vila Casas under the curatorship of Teresa Montaner and Ester Ramos.

Furthermore, the ‘Gaudí Series’, the set of engravings that Miró produced in 1979, also contributes to highlighting this meeting point between the two artists.

The photobooks, known as fotocops, which Joaquim Gomis published in the 1950s with the impulse of the artistic promoter Joan Prats – also known for his relationship with the publishing house Polígrafa, which in turn worked with the work of Joan Miró -, give another turn of the screw to this exercise in search of parallels.

Prats was a key piece in the creation of the Miró Foundation and the Gomis photocops reveal the deep commonalities of the painter and the architect with the relationship with nature, the spirit of risk or the coincidence between procedures and materials as some of the keys .

The exhibition, as explained by Teresa Montaner during its presentation this Thursday, wants to highlight the impact that Antoni Gaudí had on the other two figures in the show and how it led to works that revitalized his legacy.

At that point, Miró’s sculptural work becomes evidence of that declared admiration and the photographs that Gomis made of Gaudí’s work are confirmation.

The director of the Miró Foundation, the German Marko Daniel, has also been in the presentation of an exhibition with more than eighty works that investigates the artistic relationship between two “universal references”, as he explained.

The curator Teresa Montaner has stressed that some material is unpublished, such as some drawings by Miró from the 1950s that had never been exhibited, “and that they are related to sculptures from objects”.

Montaner sees nature as a common highlight between the two great protagonists of the exhibition and recalled that, while one was born in Reus (Tarragona), the other created his artistic universe in the nearby Mont-roig del Camp, “with which both had as reference the same landscapes and the same light “.

Trencadís, the mosaic of ceramic pieces so characteristic of Gaudí, appears repeatedly in the work of Joan Miró, of whom the curator has pointed out that he had in Park Güell “an enormous source of inspiration”.

In his opinion, ‘Miró, Gaudí, Gomis. The magical sense of art ‘what it fundamentally does is “unite Joan Miró with the past and project it into the future”.

Àlex Susanna, at the end of the presentation, has openly stated that the objective of the exhibition is that Can Mario, the museum dedicated to sculpture of the Vila Casas Foundation, becomes “an artistic space of reference”.

“This must be the great exhibition this summer so that all national and international visitors to the Costa Brava will experience it as a great party,” he added.

Marko Daniel has not been left behind either and has expressed his satisfaction for having made it possible for “a piece of the Miró Foundation” to reach the coast of Girona and remain there until November 28.