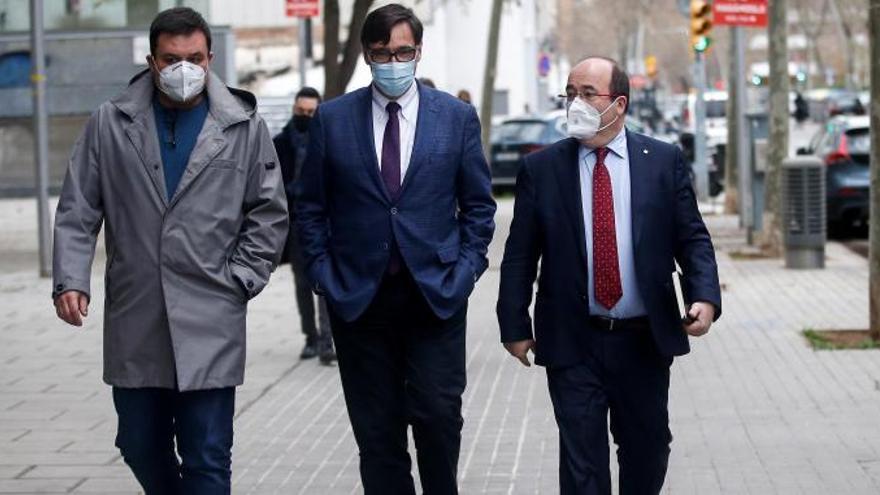 As the hours of the appointment of Miquel Iceta to the head of the Ministry of Culture pass, in the PSOE they find more and more reasons for the decision of Pedro Sánchez de dispense with José Manuel Rodríguez Uribes. “The president knew perfectly the situation of the Ministry with the sector because Iván Redondo dispatched every two weeks with agents who informed him of the chaos. Culture was a wound that bled the PSOE and it is a strategic sector for the next electoral campaign. favor and that was not happening. It is important to value the sacrifice that Sánchez has made: nobody knows more than Iceta about territorial policy. The president has sent a special body to put order, “the PSOE sources close to the movement acknowledge to elDiario.es. . From Culture they explain that the minister is finalizing the team.

As this newspaper has learned, Iceta takes Culture to his right hand in his previous portfolio, Víctor Francos, who will go from the Secretary of State for Territorial Policy and Public Function to occupy the position of Secretary General of Culture, a since Uribes created to reinstate the questioned Javier García Fernández, 72 years old. It is a privileged place from which he will direct the strategy of the units that serve the different disciplines: performing arts, cinema, museums, archives, books and cultural industries. The general directors who have served the sector so far from these areas, with Adriana Moscoso, Beatriz Navas, María José Gálvez, Lola Jiménez and Amaya de Miguel, do not seem to have a replacement. They do disappear from the scene, along with Javier García Fernández, the director of the Cabinet, Mónika Serrano, and the undersecretary, Andrea Gavela.

Francos was Salvador Illa’s campaign manager in the last Catalan elections before becoming Secretary of State for Territorial Policy and Public Function with Iceta. And before the Catalans, he worked with Illa as chief of staff during his time at the Ministry of Health. That is, you know what it is to manage a crisis. He has a degree in Law from the Autonomous University of Barcelona and a postgraduate degree in Advanced European Legal Studies from the same university, and has been closely linked to the Catalan Socialist Party for more than 17 years. In 2004 he assumed his first relevant political position as Director of the Cabinet of the Deputy Secretary of the Partit dels Socialistes de Catalunya.

In addition to his long and intense political career, those who know Víctor Francos describe him as a “tenacious worker” who does not limit his working hours. Five months after assuming the Secretary of State for Territorial Policy and Public Function, he resolved with Iceta a historic agreement with the unions to end the temporary status of the interns. As reported Rodrigo Ponce de León in early July, the agreement with CCOO, CSIF and UGT guarantees to place the temporary rate of temporary staff below 8%, which will affect more than 300,000 structural temporary staff positions that must be fixed before December 31, 2024. Cultural workers could be before an agent capable of resolving the Statute of the Artist that will guarantee their rights. The presence at Iceta’s inauguration of the Minister of Finance, María Jesús Montero, is an encouraging symbol in this regard.

PSOE sources define Iceta and Francos as “a minister passionate about culture and a decisive assistant”. In fact, Iceta demonstrated this Monday its disagreement with the change of portfolio and neither of the two has previously managed cultural matters, nor do they know the needs of the sector but from the party they assure that they will soon meet with the actors of the cultural industries to get up to date.

From the PSOE they make a devastating X-ray of the Ministry of Culture when they explain that in the last year and a half “officials have fled in a stampede.” Culture is a wasteland of technical personnel that urgently needs to be rebuilt to be able to take over the management of the calls for financial aid from the Recovery, Transformation and Resilience Plan. Culture will receive a total of 525 million euros from European Union funds (0.7% of the total of 69,528 million euros destined for Spain). The former minister acknowledged a few weeks ago that he had a plan but he had no means. The lack of personnel is a serious problem that the Iceta-Francos tandem should solve without major problems given its recent experience. “It is necessary to repopulate the Ministry”, confirm the sources of the party consulted. To turn Spain into a “cultural superpower” you need to strengthen the house.