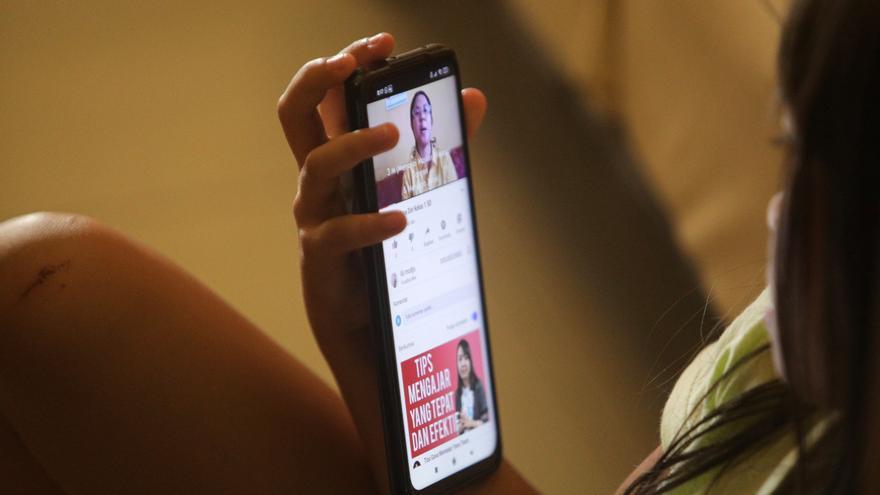 Minors have had a mobile phone from the age of 11 and one in three is hooked on the internet and social networks, to which they connect every or almost every day, according to research by Unicef, that alerts that 22.5% of young people could be experiencing cyberbullying.

“One in three children has a serious problem, we are talking about more than half a million children” who make a “problematic use”, explained the person in charge of the study, Antonio Rial, Professor of Psychology at the University of Santiago de Compostela (USC), who has opined that the figures show that “it is a public health problem.”

The report speaks of “problematic use” to refer to the possible hooking of minors to the internet and social networks, which generates a high degree of interference in their daily life and a personal, family, academic or work impact, which may even be accompanied by symptoms at the clinical level.

The teenagers 31.5% state that they are connected for more than 5 hours a day during the week and half of them exceed those hours of use during the weekend.

Four out of ten adolescents acknowledge that they connect so they don’t feel so alone. They connect by seeking positive relationships, communicating with their friends, and having fun.

But his experience in Social networks have also caused them feelings such as fear (24.7%), anguish (19.7%) and restlessness (27.9%), some results before which Unicef ​​warns that the mental health of minors may be affected.

The report shows that the lack of knowledge about some of the dangers and preventive measures to avoid them, can put many adolescents at serious risk.

“The data provided also shows that there may be a lack of presence and accompaniment by families in the lives of adolescents“, which leads them to seek company and support on the Internet and social networks, he asserted Gustavo Suárez Pertierra, President of UNICEF Spain.

Half of the victims are also stalkers

Among the risks identified by young people in their digital relationship, it stands out that harassment practices are increasingly common, but also that more than half of those who suffer bullying exercise it in turn.

Not being in the networks is an exceptional fact, indicates the investigation. 98.5% are registered in some and 61.5% have more than one profile in the same social network that they selectively use for family and acquaintances or for the peer group.

“As a result of pressure and blackmail, many adolescents may be exposing images and personal and private content on social networks and other Internet channels; this also exposes them to come into contact with strangers and find themselves at risk of ‘grooming’ or sexual harassment online” , alert.

One in 10 minors has received – through networks, chats, the Internet or video games – a sexual proposal on the Internet by an adult; 11.4% have been pressured to send photos or videos of themselves with sexual content.

Regarding the game, more than 70,000 ESO students (3.6%) acknowledge having gambled money online sometime in their life (sports betting, 31%; poker, 20%; bingo, 12%), and they do it to earn money and have fun. One in 10 of these minors could become a gambler, which would be talking about 10,000 adolescents.

Six out of 10 teenagers use video games as their main leisure and entertainment channel and more than half to games not suitable for their age. One in five minors admits having a certain addiction to video games (around 400,000 adolescents).

It is estimated that more than 600,000 ESO students could present a “problematic use”, which is characterized not only by a high frequency and intensity of connection (many days and many hours), but by a high degree of interference in the day to day of the adolescents themselves and their families.