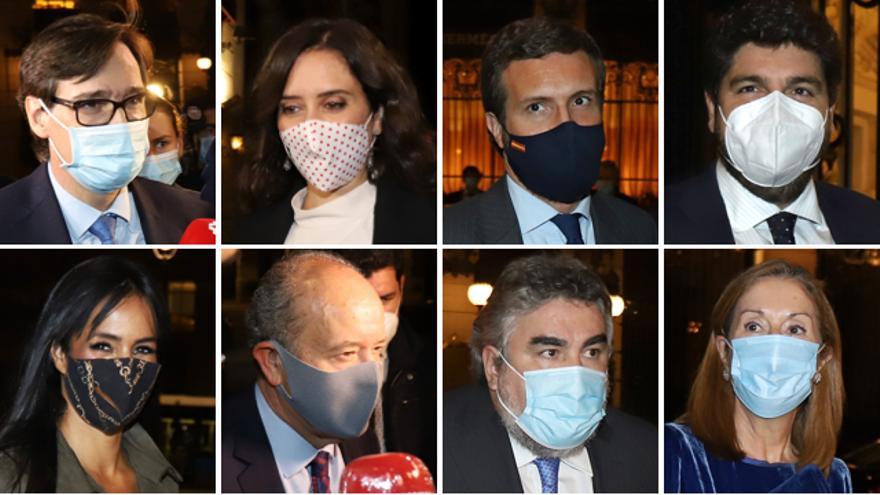 Four government ministers, including Health, Salvador Illa, the presidents of Madrid, Murcia and Castilla-La Mancha and the leaders of Ciudadanos and the PP, have participated this Monday in an institutional act with dozens of people, at the beginning of a week marked by the state of alarm and the curfew in force throughout the country. An awards ceremony brought together the most distinguished of Spanish politics and business at the Casino de Madrid precisely when official recommendations indicate extreme precautions and minimize social contact to tackle the “worrying” contagion curve of this second wave of coronavirus in Spain.

One day after the President of the Government communicated a state of alarm for the entire country and announced “very tough months”, the photographs of the leaders of PP and Ciudadanos, Pablo Casado and Inés Arrimadas, posing without a mask during a dinner have surprised . In the images of the meeting you can also see Minister Illa talking with the PP Health spokesperson, Ana Pastor, and Casado doing the same with the Minister of Defense, Margarita Robles. The Minister of Justice, Juan Carlos Campo and the Minister of Culture, Jose Manuel Rodríguez Uribes, also participated in the meeting. The leadership of the PP made full in the celebration, with Casado, Pastor, Cuca Gamarra, Teodoro García Egea and Pablo Montesinos. Also among the popular were the mayor of Madrid, José Luis Martínez Almeida, and the president of the community, Isabel Díaz Ayuso. Other regional presidents, such as that of Castilla-La Mancha, Emiliano García Page (PSOE), and that of Murcia, Fernando López Miras (PP), also attended the institutional event at the Casino. On the part of Ciudadanos, in addition to Inés Arrimadas, the vice mayor of Madrid, Begoña Villacís, and the party’s parliamentary spokesperson, Edmundo Bal, were part of the attendance.

Health sources explain that the minister attended the awards ceremony in which the Defense Minister was recognized, among others, and that he did not stay for the subsequent dinner. They explain that “he sat at a table with five people, complying with the social distancing measures. He stayed for about an hour and at no time did he remove his mask. After the awards ceremony, he left.” As for it being a massive event for the current epidemiological situation, these sources point out that “the information provided to the ministry indicated 80 people in a room that complied with all the measures of capacity and social distancing.”

The gala, dedicated to the delivery of the Los Leones de El Español 2020 awards, began shortly after the spokesman for Health, Fernando Simón, warned at his press conference that we are facing a worrying situation from an epidemiological point of view, and that the rate of infections has accelerated. “I know we are all tired”, admitted the director of the CCAES, but emphasized that “we still have an effort because if not” we will continue to see deaths every day “:” We must be aware of the risks: if it is not necessary , it is better to stay home. We must understand it and assume it, “he said.

A few hours earlier, when announcing the state of alarm, the president had also called for “citizen collaboration, awareness and discipline” to “limit as much as possible the situations in which these infections are occurring” although, for this, have to restrict the mobility of people, the capacity and the number of people in a meeting. “And that is not necessary for any law to tell us, that we also reduce our social relations to the maximum, because what we will be doing is protecting our health, protecting that of our loved ones and defending the health of the country as a whole.”

Social networks have not been immune to the controversial participation of political leaders in this celebration, and there have been criticisms of the speeches of politicians who ask citizens not to meet with other people and not to leave home other than to essential to later attend meetings of more than a hundred people. For example, those of Inés Arrimadas who pointed out, a day before: “We tell the citizens that we will have to be strong, that restrictive measures are necessary but that we will succeed because we are a great country.” Last week, Mayor Martínez Almeida asked Madrilenians “to go out as little as possible.” “The less we move, the better,” he said. Similar messages have been transmitted in recent days by almost all attendees with some political responsibility.