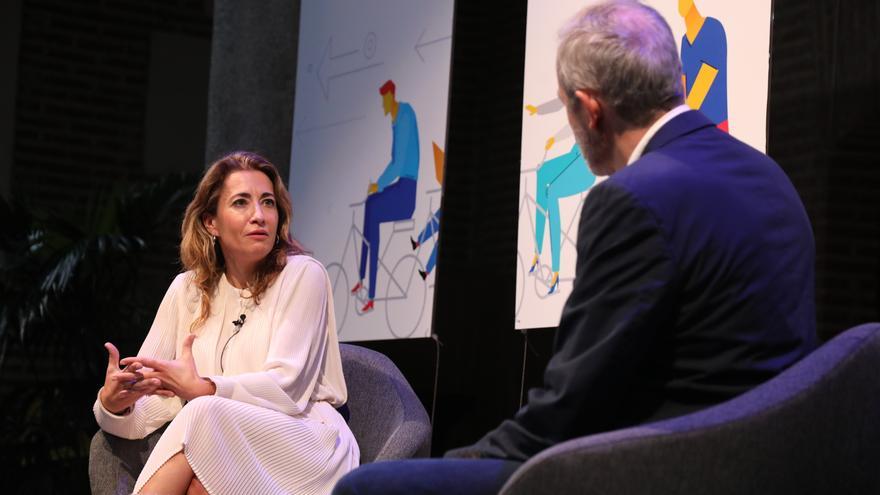 “It has been a great day because we put in place a historic law.” The Minister of Transport, Mobility and Urban Agenda, Raquel Sánchez, has valued this Thursday the approval by the Council of Ministers of the preliminary draft of the Housing Law, with which the Government intends, has explained, to guarantee a right that includes the Constitution but it has never been made effective in a real way.

In an interview with Gumersindo Lafuente, deputy director of elDiario.es, within the framework of the II Conference on Sustainable Mobility organized by this newspaper, Sánchez has admitted that “so far, due to different circumstances, due to the lack of a public park of housing “, it has been” practically impossible to access housing for the majority of citizens “, both through rent and purchase.

Then he has narrowed down a little more what are some of these circumstances: “That public housing stock has been alienated and de-patrimonialized by some public administrations,” he stated, to add that another leg of the Government’s project regarding housing involves “mobilize” 100,000 houses to begin to constitute that public park to which he has alluded. The minister has recognized that without a home no one can “develop their life project” or “transmit values ​​or ensure their children’s school success if they do not have a home”, to end up qualifying the new norm as “the fifth pillar of the state of the wellness”.

Sánchez has also referred to the “challenge”, as he has described it, of reducing pollution in large Spanish cities, which Lafuente reminded him costs Spain money in European fines. According to Sánchez, the objective of reducing emissions by 90% goes through two routes: “Mobility and the modal transfer of more polluting means of transport, such as vehicles, to other less polluting ones, such as railways”, and “regeneration of cities, of urban and metropolitan environments “.

The first leg is to reduce the use of vehicles such as cars or airplanes, but it does not only affect citizens, Sánchez explained. “It also happens with goods”, recalled the minister, who has valued that this year’s budgets include an investment. Spain has a high volume of road transport in relation to the train and in comparison with other European countries, and this system “is very polluting, apart from the degradation it produces in the road network. There we also have to achieve this transfer”.

Regarding the cities, the minister has opted to recover “the model of cities that we had a few years ago, that of the compact Mediterranean city, with very well planned facilities” that the liberation of the soil, promoted by the Government of José María Aznar in 1998, it destroyed. “It gave rise to another type of city,” the minister said, “neighborhoods were built with less density that imposed a subjection to the motor vehicle and that from the point of view of sustainability were not the best model.”

The minister has also been asked about the new toll system that the Government wants to implement, for which it will charge for the use of highways, although it has not specified whether this same legislature will come into operation. “We are talking about introducing a structural change, a new but necessary system”, he has begun, to justify that currently maintenance “is paid by all of us”, regardless of the use of the roads, charged to the budget, which generates “imbalances”.

According to Sánchez, this system differs from the rest of Europe and “is not sustainable.” The minister, who has avoided specifying the Government’s plans beyond her wish for it to be “progressive”, has called for a “serene and transparent” debate, which will elicit “the necessary consensus on the part of the agents involved and the competent authorities: political parties, autonomous communities, unions, etc., for which it is necessary to “do pedagogy” among citizens “that it is necessary to propose a fairer system of maintenance of our infrastructures”, because the previous one resulted in “territorial inequalities”.

Asked in the context of transport, Sánchez explained that the Government “does not renounce” a “strategic” project and as important for the Government as was the frustrated expansion of El Prat “in case the Generalitat considers recovering that project.” “The Generalitat decided to rethink the decision and [el Gobierno] understood that you can not pull forward [el proyecto] against the territory where it will be implanted, “he admitted.” It is a strategic project that was going to generate a positive impact on the economy, “he valued.

Finally, the minister referred to the challenge of emptied Spain with regard to the competences of her ministry. “We have 5,000 municipalities with 100 or less inhabitants,” Sánchez recalled, and the mobility of these people “is one of the great challenges” of his portfolio. “Mobility, understood as the right of the citizen to move where they need to to have access to different equipment, has a lot to do with that. Infrastructure and the transport system are the instrument, and we must not only think about a system such as the railroad “He reflected on his own previous thoughts,” the electric vehicle on demand, for example, can serve to respond to those mobility needs of less populated environments, which means more efficient and sustainable mobility. The railway is sustainable and efficient when it is full “, it has closed.