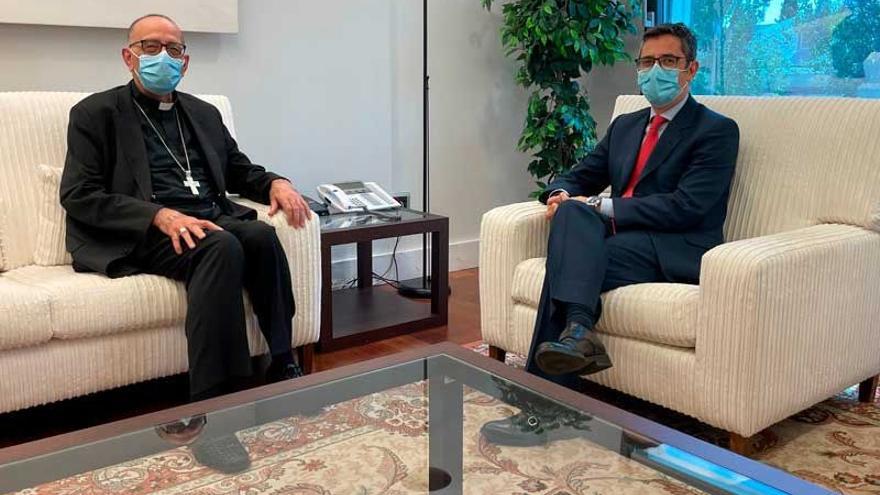 The Minister of the Presidency Félix Bolaños met this Tuesday with the president of the Episcopal Conference, Juan José Omella. The meeting, registered within “one of the meetings that the new minister is holding with the institutions with which his Ministry is related,” takes place two weeks after the approval by the Council of Ministers of the draft of the Democratic Memory Law, which foresees resignify the Valley of the Fallen and expel the Benedictines from Cuelgamuros.

Some monks who on July 21 received the visit of the episcopal spokesman, Luis Argüello, who sent them his support, as well as a legal report prepared by the House of the Church (prepared by the clergyman Silverio Nieto, a fundamental witness in the plot which will take the former PP Interior Minister Fernández Díaz to the courts) who could serve as support to the defense of the friars. A visit, that of Argüello, which took place in a personal capacity, and without counting on the Archbishopric of Madrid, who was ultimately responsible for the basilica.

Along with this topic, Bolaños and Omella reviewed items with special emphasis on the future Law on Freedom of Conscience, the draft Law on Historical Heritage and issues related to taxation.

Other issues, such as abortion, euthanasia or the trans law were not officially addressed, as they are not part of the doctrinal corpus of Spain’s relations with the bishops. The appointment of a new military archbishop and the educational law were also part of the conversation, which took place in a cordial tone. After all, Bolaños and Omella already knew each other. Both, in addition, are two men willing to dialogue and agreement.