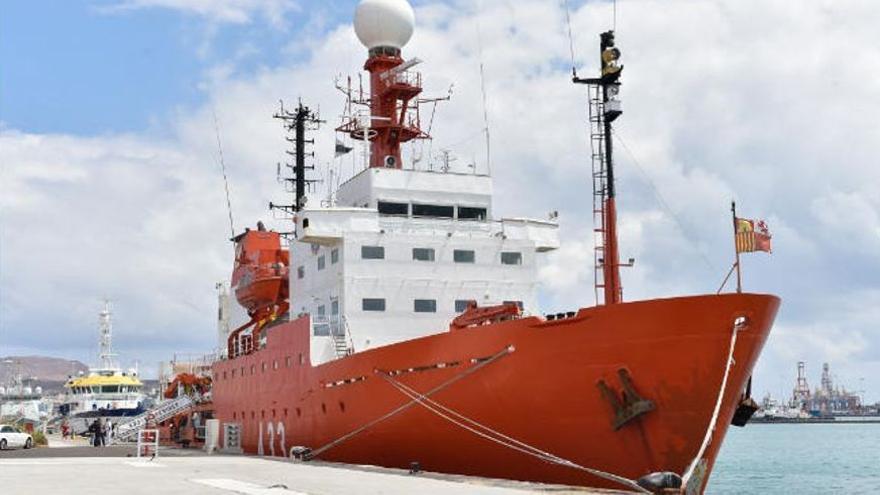 The military infected with covid in the Hesperides continue to increase and already amount to 39 of the 58 crew members of the Navy ship, which is docked in The Gran Canarian palms after canceling his trip to Antarctica and where the uniformed denounce that they mix healthy with sick.

He Hesperides sailed on December 30, Cartagena (Murcia) Heading to Uruguay to participate in the Antarctic campaign but, despite the anticovid quarantine and PCR protocols, on January 3 four positives were detected on board when he was about twelve hours away south of the Canary Islands.

At that moment, he turned around and headed to Las Palmas, where he arrived on the 4th. In the next two days, antigen tests were performed on the rest of its 58 crew members and 13 more cases were detected: 6 asymptomatic and 7 with symptoms.

The 17 positive military officers then disembarked from the oceanographic vessel, but the rest stayed inside, with protocols that the Navy says were rigorously followed but that, both the military confined in it, and the association Union of Military Troops (UMT), they consider insufficient.

THREE HOSPITALIZED, ONE IN THE ICU

Six days ago, the Ministry of Science and Innovation reported the cancellation of the Hespérides trip and reported 35 infected. To date, that number has increased to a total of 39 positives, of which three are hospitalized (one of them, a first sergeant in his 40s, in the ICU) and one has been discharged with a negative PCR.

“It was a matter of time, I felt like I was on death row and waiting for my turn, I had to get there”. The one who speaks one of the infected soldiers, who tested positive a few days ago, so he believes that in the possibility that if he had disembarked upon arrival, he would not have gotten sick.

There are now 41 uniformed men on board, of which 22 are infected (including the ship’s commander) and another 19 healthy.

Navy sources assure Efe that the positives that have emerged and their close contacts have been isolated in individual cabins, following the indications of the Navy’s Health Directorate, in permanent contact with the Institute of Defense Preventive Medicine.

They add that two disinfections were carried out in the cabins of the positives and in all the common areas of the ship, from which point the entire crew was isolated in individual cabins. The infected, add the official sources, are cared for by the medical service and the food, following the protocols, is served with EPI suits.

However, according to this military officer who prefers to remain anonymous, the confinement is not fulfilled and some asymptomatic infected leave their cabins to common areas to smoke. “Asymptomatic patients passed by my door every day”, he relates.

At HesperidesHe assures that it has been the circumstance that healthy crew members deliver food to the positive in their cabins without PPE, only provided with surgical masks and gloves. He himself claims that he had to take her a couple of times under those circumstances.

The military man complains that guards are still being posted, for example, at the ship’s entrance door, when it is moored at a military dock, and that the crew goes through common spaces to check the proper functioning of the ship only with a mask.

He acknowledges that at the time the cabins on the upper decks and those of the officers were disinfected, but not those on the lower ones, where, he assures, most of the crew sleep.

Like the rest of the crew, he has been on the boat for fifteen days moored and has seen how his companions in the neighboring cabins have been testing positive “without being able to sleep, with the anguish that you are going to catch him”. Now he has symptoms that he hopes will not get worse.

“We are abandoned. While there was interest in not suspending the campaign they have been a little attentive, but, at the moment it was lost, the feeling is that we are stranded on the dock to see how the storm passes and see who survives “, says this military man, for whom “it was a matter of time” to get infected because, “with this bug, you have screwed up with any nonsense.”

The UMT has denounced this matter in a request for information presented this Monday to the Ministry of Defense, in which it affirms that it has evidence from several sources that “infected personnel have been kept together with healthy personnel, with insufficient a priori measures.”

“The common areas, apparently, have turned out to be the trigger for the virus to spread to the crew of a ship without the possibility of leaving it, so it was foreseeable and only a matter of time before the rest of the companions on board get infected “, indicates the document to which Efe has had access.

The association asks Defense about the protocols established in the Hespérides and if they are being complied with in its “life and work zones”, while urging it to qualify the personnel of the Armed forces as high risk.