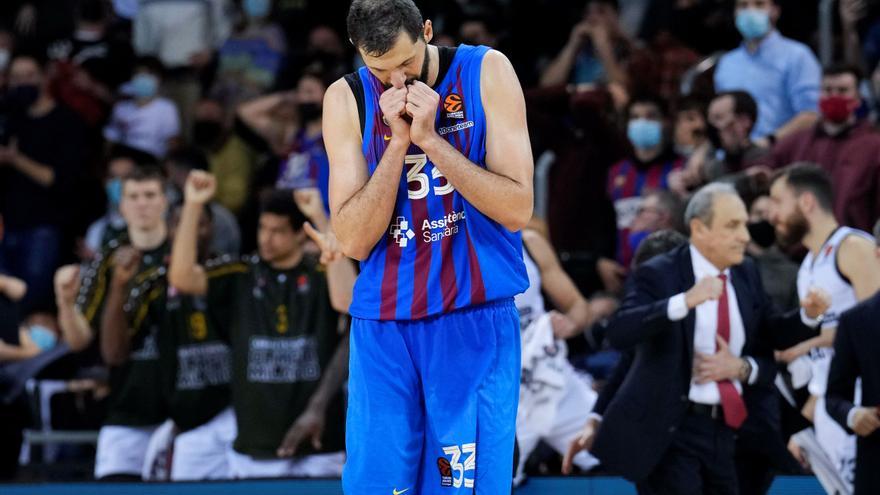 The Barcelona chains his third consecutive defeat after losing the condition of undefeated at home in the Euroleague after falling this Tuesday at the Palau Blaugrana in front of the Milan Italian73-75), led in attack by the Spanish base Sergio Rodriguez and the ex-barcelonista Malcolm delaney.

The former Real Madrid player scored 18 points, the majority before the break, and was well supported by Delaney's scoring breakthrough after the restart (15 points), while the most prominent in the Barcelona squad were guard Kyle Kuric (22 points) and power forward Nikola Mirotic (18 points).

After going slightly behind at halftime (28-34), the team led by Sarunas Jasikevicius came back in the third quarter (54-47) but was overtaken in the final period by the pupils of Ettore Messina (19-28 of partial) in a match very even and marked by the defenses.

The Barcelona team heeded the wake-up call from Jasikevicius, who in the preview warned of the team's defensive downturn in the last month and a half, and initially exhibited a defensive tension that however was accompanied by a low percentage of success in the shot (5 of 11 in shots of two and 1 of 5 in triples).

Equality was the dominant trend of the first period, with minimal alternations on the scoreboard and in which the ex-Madrid base stood out Sergio Rodríguez with 10 points (14-14, end of the first quarter).

Barça tried to open a gap in the light through the power in the painting of pivot Brandon Davies, recovered at the last minute like forward Sergi Martínez after overcoming Covid-19, but two consecutive triples from power forward Nicolò Melli and Ben Bentil (7 points at halftime) caused Jasikevicius to time out (21-22, minute 14).

Both teams defended tooth and nail every inch of the court without finding answers in attack and the intensity of such an even contest did not escape the benches, as both Jasikevicius and Messina were charged with a technical foul for their protests (25-27, min.18).

Five points in a row from Sergio Rodríguez, leading scorer at halftime with 15 goals, gave AX Armani Exchange Milan a slight advantage (28-34), while Barcelona continued to deny the shot (3 of 12 in triples compared to 5 of 8 of Italians) and had Nikola Mirotic and Kyle Kuric as offensive leaders with six points.

The torrential exit of Barcelona after the break, with a partial of 9-0 lDevised by five points from Mirotic, he turned the score around (37-36, minute 24) and lit up Palau Blaugrana.

Driven by the encouragement of their audience, the Catalan team redoubled their defensive intensity and began to score fluently, with Kuric (9 points in the third quarter) and Nico Laprovittola joining Mirotic to extend the set to 19-2 (47-38, minute 27).

The offensive contribution of ex-Barcelona player Malcolm Delaney allowed Milan to maintain a deficit below double digits at the end of the third quarter (54-47) and the Italian team rallied to the beginning of the final quarter (58-56, minute 34).

The outside success of Jokubaitis and Kuric returned the advantage to Barça (63-59, minute 34), but Sergio Rodríguez and Delaney, with the same recipe, made it clear that the game was not going to be decided until the final possessions (65-67, minute 38).

A Davies basket made it 67-70 with one minute to go and Kuric scored three to make it 70-71 with 30 seconds left. Next, Delaney seemed to be sentencing from the perimeter but Another triple from Mirotic made it 73-74 five seconds from the end.

Barça missed Melli, who forgave one of his two shots, but Laprovittola's desperate throw over the horn ran into iron, leaving the final 73-75 on the scoreboard.

The crossing of the first round in Lombardy lands had resulted in a victory for the Messina team (75-70), but the Barça fans still remembered Barcelona's epic triumph in the semi-final of the Final Four last year (84 -82) thanks to a basket in the last second from guard Cory Higgins.

Referees: Olegs Latisevs (LET), Fernando Rocha (POR) and Milan Nedovic (ESL). Without eliminated. They signaled a technical foul to the local bench and two to the visiting bench.

Incidents: Match of the twentieth day of the Euroleague played at the Palau Blaugrana in Barcelona before 4,430 spectators. Before the game, local Nikola Mirotic received the award for best player in the competition in December.