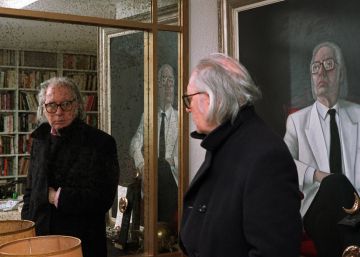 In 1993, the journalist Mercedes Milá interviewed the writer Francisco Umbral In a television network. Threshold had just published The red decade, a personal chronicle on the Spain of the eighties and the governments of Felipe Gonzalez. That interview, as everyone knows, became very famous. Threshold got angry at all of Spain because the program was going on and his book was not being talked about. The phrase “I have come here to talk about my book”, which has ended up enriching the popular heritage became famous. 26 years have passed since that interview, which is posted on the internet and accumulates one million visits. I see her often. I like to see it because it reminds me of the past. There Umbral is still young, and strong in speech and an angry gesture, you wear a vest, tie and an American jacket fashion and exhibits his unforgettable voice. And Mercedes Mila is a young and intrepid journalist, with a curious look and inquiring mind. It is yesterday. Yesterday and an anger, and how that anger ended up being a symbol of an era. One deduces that Mercedes Mila and Umbral were friends, and I imagine they would continue to be after the interview, because Umbral's anger turned into pure literature. Mila tells him that "I didn't expect you to do this with me, Paco."

Threshold complains bitterly that he has left some friends with whom he was celebrating the appearance of his book to go to television. Who would those friends be? I wonder 26 years later. I like that moment when Threshold threatens to leave the program, because I see an act of freedom there. Why stay in an absurd talk show if you don't talk about my book, says Threshold with contempt. Why stay in so many places in life where inanity reigns, it could be the hidden teaching for all of us. Why not leave, where circumstances force you to stay.

There is another moment of the interview that seems to me of capital importance: Threshold says that he does not need to go to television to express his opinion, because for that he already has his column in the newspaper where “I say what I think and I play life and the future ”. Whoever considers it a rhetorical statement will be wrong and much. Threshold life was played in each article. There was in that statement a way of understanding literary journalism as a bullfighting, where expressing opinions that were dissolvent, uncomfortable, throwing, ideologically incorrect and above all full of imprudence had a touch of legendary romanticism. I miss literary inaccuracy, because there was grace and disorder and talent in it. I believe that today Threshold would have lost its life and its future. We live in a world of theoretical freedom. We know we have it, but we don't exercise it just in case, we won't lose our lives and the future.