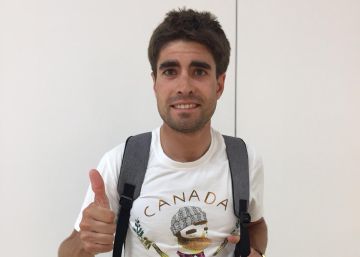 The planned movement of Mikel Landa, leaving the Movistar after two courses, and signing for Bahrain Merida, has become official on Monday through a statement on the website of the Asian team, where the 29-year-old Basque cyclist will replace the Italian Vincenzo from 2020 Nibali, 34. Landa will be one of the ranks of the powerful team in the Middle East, with which he will run the big laps in the next campaign.

In this way, Landa will embark on a new professional adventure after not having achieved a great performance in the Movistar Team, which opted for him by signing him from Team Sky in the summer of 2017 for two campaigns, until the end of 2019.

As a runner of the structure of Eusebio Unzué, the 29-year-old Alava cyclist has only been able to have two partial wins in the Tyrrhenian-Adriatic (2018) and Coppi-Bartali Week (2019), while in the 'big ones' he has Shone but without getting any podium. This year he was fourth in the Giro, where he started as theoretical row leader and where his partner, Ecuadorian Richard Carapaz, won while in the Tour he was seventh in 2018 and sixth in this year's edition, marked by a fall that Wasted valuable time. He also won the Combativity Prize in stage 15.

"I am very proud that the Bahrain-Merida team has chosen me to lead this project. I feel very excited about the next challenges," Landa said in statements on the cyclist's website.

The general manager of Bahrain Merida, Brent Copeland, said Monday that "it is an immense pleasure that we welcome Mikel to our team; he is a driver who brings excitement to the races with his incredible climbing skills, which makes him in one of the most competitive racers for the big laps. "