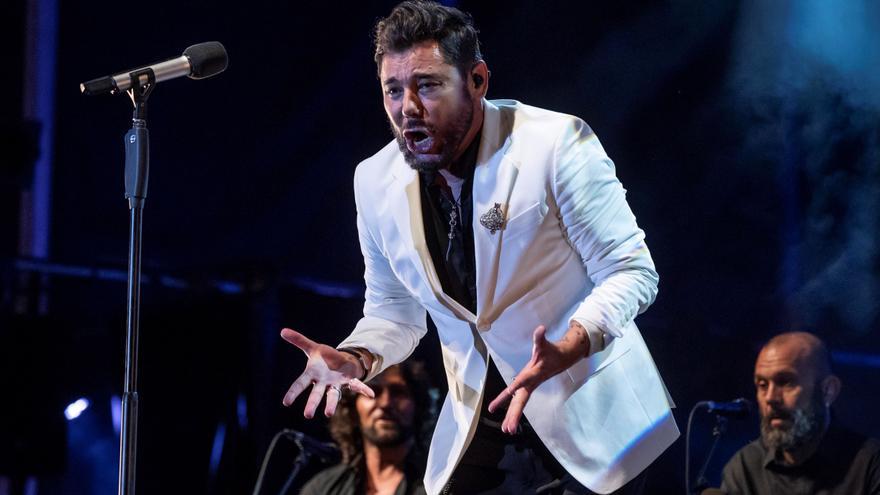 La Unión (Murcia), Aug 2 (EFE) .- The singer Miguel Poveda has once again demonstrated tonight that he is in a great moment of artistic maturity on his return to the International Festival of Cante de las Minas, where he has presented his latest show, ‘In concert’.

The artist from Badalona, ​​who starred in 1993, at just 20 years old, one of the festival’s historical moments sweeping his voice to take the Mining Lamp, has returned like a prodigal son to La Unión, where he already treasures a Gold Castle in 2008 and a street named after him since 2010, the year of his previous visit to the Cathedral of Cante.

This time, La Maquinista de Levante, which replaces the Old Public Market as the main stage, has witnessed the voice of the Badalonian, of a Murcian father and La Mancha mother, who has begun his recital by covering the ‘Ode to Walt Whitman’, a poem by Federico García Lorca.

Then it was the turn of ‘El uvero’, the bulería ‘Palitroque’ and ‘Esta noche command yo’, which served as an introduction to a show based on flamenco, poetry, copla and Andalusian song.

The cantaor, dressed in a white jacket that contrasted with a sober stage, has been accompanied by Paquito González on percussion, Miguel Soto ‘El Londro’ on clapping and singing, Carlos Grilo on clapping, and bailaor ‘El Choro’ and the guitarists Dani Casares and Diego del Morao.

In a presentation in which he has summarized his current moment on stage, he cannot go without García Lorca, to whom he has dedicated his last three albums, or without going “hand in hand” with the Andalusian song, like that ‘Qutame el beso de last night ‘, by Miguel Vargas Jiménez.

Poveda has resumed directing with a tour that began in April after a year without being able to present his latest studio album live, entitled -ironías del fate- “Time passes by” (2018), with which he closed the trilogy dedicated to Federico García Lorca, completed by “Sonetos y poemas para la libertad” (2015) and “Enlorquecido” (2018).

An emotional ‘Letter to Regino Sainz de la Maza’, guitarist friend of Federico García Lorca, has given way to a musical diversity that allows the Badalonese artist to move from a flamenco palo to a bolero and end with ‘Hey’, by Julio Iglesias, or ‘I’m going to lose my head for your love’, by José Luis Rodríguez ‘El Puma’, without losing an iota of intensity in his voice and in his handling of the stage.

The esplanade of the Maquinista del Levante has hung the first gala with the ‘There are no tickets’ which confirms the expectation that Poveda’s return has aroused after ten editions of the festival without doing so, and which has become a review of the sound memory of the Spain of the 20th century.

After an interlude in which the headliner has left a theme for the showcase of his painting, the cantaor has returned to the stage with his most profound side, such as his interpretation of ‘Malagueñas y abandolaos’, some bulerías, some tangos or some Seguiyas, which have awakened the olés of the Unionense public, who waited like May water for the flamenco waste of the 1993 Mining Lamp.

Poveda, who has changed his white jacket for a black vest with the profile and name of Enrique Morente, has continued with his versatile repertoire with a round trip cante -a guajira- dedicated to the “brothers” of Cuba, who ” they are having a regular time, “defending that” human beings should be free. ”

One of the most emotional moments of the concert was when Encarnación Fernández, double winner of the Minera Lamp in 1979 and 1980, took the stage, invited by Poveda, to take the stage, both singing by mineras accompanied on guitar by the singer’s son, Antonio Muñoz.

The Catalan artist has closed the fifth day of the festival with alegrías, which began with a performance, within the cycle “El cante en la calle”, by Celia Romero, who won the Mining Lamp in 2011, with only 16 years .

Previously, the organization has given the Pecho Cros award, in the category of Plastic Arts, to the sculptor María Dolores Fernández Arcas, and the Gold Castillete to Juan Jiménez Alcaraz, for his work in directing the International Festival of Cante de las Minas during various editions.