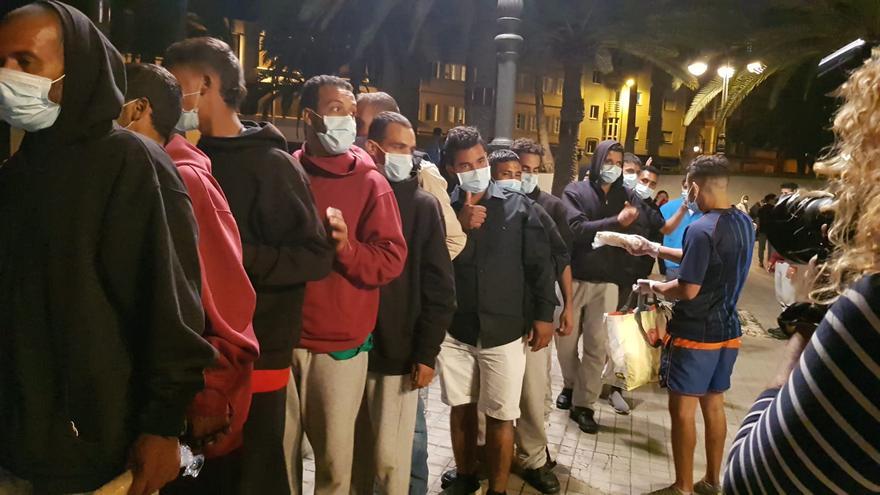 The Ministry of Migration has rehoused tonight in a Maspalomas bungalow complex (Gran Canaria), the Oasis view, 139 of the Moroccan immigrants who had gathered before the Government Delegation in Las Palmas de Gran Canaria after the Police facilitated them to leave the Arguineguín camp, without a reception resource.

“Thank you very much, mercy beaucoup”. They have been the most heard words while these 139 immigrants, all young men, got on the three chartered emergency buses tonight to respond to the situation that has generated the unexpected departure of 227 people from the Red Cross camp in Arguineguín.

Around 4:00 p.m., the Police made it easier for these people to leave the dock, arguing that they had exceeded the 72-hour retention period authorized by law to take the filiation of irregular immigrants, without any being subject to quarantine or restriction movements for health reasons.

The departure of these people from the dock directly to the street, without a reception resource programmed for them, caught the Government of the Canary Islands, the Mogán City Council and the NGOs by surprise..

The first to react was the Consistory, which immediately arranged a transport for those who wanted to travel to the capital, Las Palmas de Gran Canaria, where the Consulate of Morocco and the Government Delegation are located..

Almost 200 did so, to recognize when they arrived outside the representation of the State Administration that they had no where to sleep, or what to eat, nor did they know where they were going to be able to stay.

While the Ministry of the Interior announced that it was going to investigate why this situation had occurred, Migrations and the Government of the Canary Islands coordinated with other administrations, such as the City Council of Las Palmas de Gran Canaria, and the Red Cross to prepare an alternative to prevent anyone from sleeping on the street.

Finally, they resorted to hiring another of the tourist complexes in the south of Gran Canaria that have been empty for a long time due to the crisis that the coronavirus pandemic has caused in the sector.

And all this just on the day that the Federation of Hospitality and Tourism Entrepreneurs of the province of Las Palmas (FEHT) and the unions UGT and CCOO had asked in unison that immigrants leave the hotel rooms and that the tourist areas prepare now to resume activity in the winter season.

With the efforts to relocate them under way, several dozen citizens flocked to the Plaza de la Feria to offer water, some food and support to the immigrants abandoned there.

Some did it privately; others, representing organizations very involved in this matter, such as the Spanish Commission for Refugee Aid (CEAR) or the Federation of African Associations in the Canary Islands.

This Wednesday, the new Superior Chief of Police of the Canary Islands, Rafael Martínez López, was scheduled to take office in a ceremony announcing the presence of the general director of the body, Francisco Pardo Piqueras, and the Government delegate, Anselmo Pestana. In the middle of the controversy generated by what happened in Arguineguín, the Delegation announced that this act was suspended.