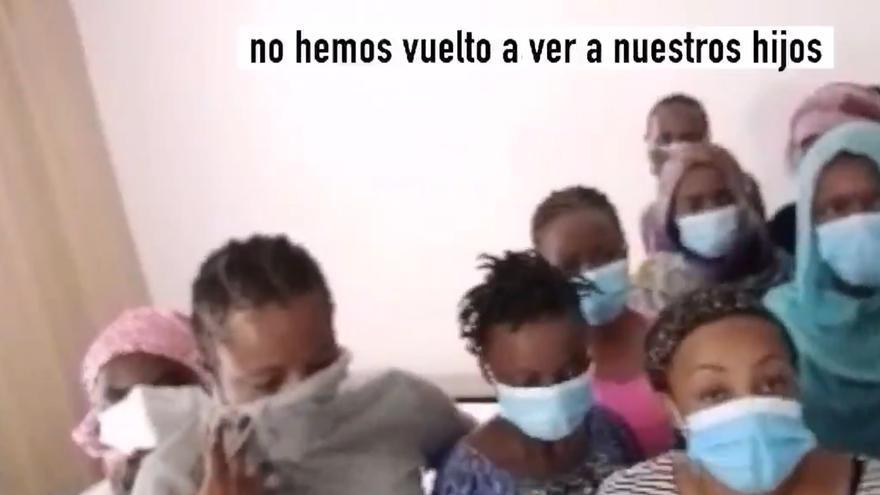 “My daughter is getting sick. She no longer eats because her mother is not with her. We are suffering. In all the Canary Islands she suffers. Especially we women.” A group of migrant women who arrived by boat in Fuerteventura have demanded in a video released by the Caminando Fronteras collective that they be reunited with their children, from whom they have been separated for three months by order of the Las Palmas Prosecutor’s Office. The decision seeks, according to the prosecutor, to avoid episodes of child trafficking in those cases in which families cannot demonstrate the filial link, although the protocol for unaccompanied minors only contemplates it when “there is an imminent risk for the minor.”

In the video, the mothers denounce that they have been in the Archipelago for three months and that they are suffering because their sons and daughters were taken from them when they reached the Canary Islands. “Since we arrived in Spain on August 27, we have not seen our children again. There are young girls here, married, engaged and pregnant, who also want to see their partners. There are others who want to go to the Peninsula to work. There is no work here, this is like a prison, “they narrate.

“They have contacted us and told us that they want to tell their stories. They want to have a voice. They can’t take it anymore, they want to speak, they want to be heard.”, Says Helena Maleno, founder of the collective. “Now that we talk so much about feminism, about putting the pain of women at the center, these women suffer from a system that does not protect their right to family life. The damage that this does to mothers and children is irreparable. They have undergone a A journey where they have risked their lives, they go to an area where they do not know anyone and are suddenly torn from the arms of their mothers. These protocols are focused on foreigners and forget the rights of women and children. ”

In the province of Las Palmas, unlike what happens in Santa Cruz de Tenerife, minors who arrive accompanied by a relative are automatically transferred to reception centers managed by the Government of the Canary Islands, waiting for a proof of DNA confirm your relationship. The practice has been criticized by the Ministry of Social Rights and is being evaluated by the Superior Prosecutor of the Canary Islands, Luis del Río, who considers that it may be “counterproductive” to keep children separated from their mothers for so long if the test finally confirms that they are mother and son.

Since 2013, there have been cases of separation of migrant mothers in Andalusia and Melilla, while waiting for the results of the DNA tests of families that do not carry documents that prove their filial relationship, despite the fact that prevention measures against the use of of minors, included in the Framework Protocol for Unaccompanied Minors, do not set this pattern, as they only contemplate it in exceptional cases, when an “imminent risk to the minor” is perceived. The Las Palmas Prosecutor’s Office defends that separating mothers from their children is a “precautionary measure.” For his part, the superior prosecutor of the Canary Islands, Luis del Río, is reviewing the interpretation of the protocol made by the prosecutor of Las Palmas.

The Ombudsman has for years considered the delay in sending the results excessive, so he asks to improve and speed up the procedures initiated for the identification of accompanied minors, in cases in which it is not possible to prove the family relationship with their companions . In addition, the institution recommends year after year the referral of these cases to centers where families can remain together while waiting for the results of DNA tests. In this sense, the State Attorney General’s Office has been willing to propose the reunification of these families. In a statement, the institution has proposed the “adoption of measures” to the administrations responsible to facilitate “spaces or centers in which it is guaranteed that minors and parents maintain the situation of coexistence”, with the aim of prioritizing the best interests of the minor .

Given this, The Secretary of State for Migration has offered the Canary Islands two centers in Gran Canaria to accommodate migrant children and their mothers while the procedures to verify their affiliation are carried out, in order to avoid the separation of families. The Ministry of Inclusion, Social Security and Migration has contacted the Ministry of Social Rights to offer a total of 90 places in two different resources that are part of the Humanitarian Attention system. The facilities, sources from the institution assure, make up “a space of trust so that the people taken in can express” any need that requires help “, which makes it easier for the teams to” detect situations of special vulnerability “, such as identifying of trafficking victims.

We need your support to continue to inform you. The coronavirus crisis has dealt a severe blow to all the media, including this one. We intend to avoid any type of cut that supposes a reduction in the quality of the information that you demand of us. But for that, we need your support.