Watching play from a bench is difficult. It ends up becoming a metaphor for life itself, which passes while others enjoy it, perhaps just as prepared as the one watching, but with an opportunity that for whatever reason has been denied. That frustration is what Ousman, Bintou and Ahmed, all fictitious names, from The Gambia, Senegal and Morocco, describe.

They are young migrants, minors, who arrived on the islands by boat and whose guardianship now falls to the Government of the Canary Islands. Like many, they have seen in soccer a way of escape from the emotional burdens that their situation entails: sport provides them with discipline, new friendships and a way of integrating into island society. However, the context limits them due to mere bureaucratic issues.

Until the end of last year, a FIFA regulation that sought to prevent "marketing" with young foreign promises prevented unaccompanied minors from federating. Transferred to the context of the autonomous community, it means that Ousman, Bintou and Ahmed could train on the field but not compete in the amateur leagues. "Why do we try so hard if the answer is always 'no'?"

The pressure from a large number of groups, including the clubs themselves, associations, Canarian universities and others involved in the cause, such as the Juvenile Judge Reyes Martel, managed to get the rectors of the international organization to reformulate the approach -that in a In principle, it only contemplated refugees – and allowed all vulnerable minors to prepare the files.

In this sense, from the Las Palmas Football Federation they point out that in recent months the procedures have been streamlining, but for the moment only one of the applications submitted has been authorized, another five are still in process and four are in a state of correction. mistakes.

"I have presented all the papers that they ask of us and I am still in the same situation, I don't know what else to do," explains one of the boys, resigned, who every day asks his coach for his file at a neighborhood club in the Gran Canaria capital. "All we want is to play like everyone else." The other two, on the other hand, are not able to clarify the status of their application. 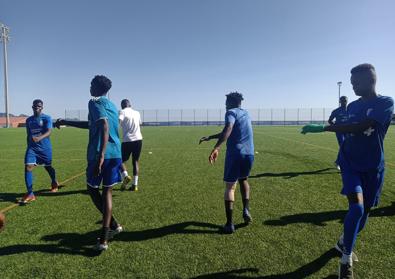 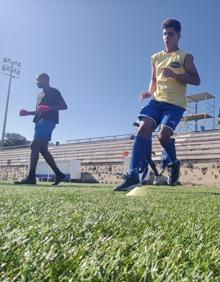 From the time the report is sent until it is resolved, a maximum of thirty days must elapse. The blockage in this matter seems to come, on the one hand, from the difficulties in compiling previous documents, which vary depending on each case and whether or not they have a sports history in their countries of origin. On the other, from the authorization of FIFA, which with the fear of exceeding this recent "laxity" of the norm, "throws back" chips, according to some coaches.

"The season is going to end and we don't see those steps being taken," criticizes Miguel Llorca, a member of the African Studies Classroom and retired professor at the University of La Laguna (ULL), with which he has promoted for the second year -together with the Foundation of CD Tenerife – the Campus Sansofé project. An initiative that brings together young migrants a couple of times a week for training and through which around a hundred Africans have passed in different groups.

Why do we work so hard if the answer is always that we can't compete?" young people complain

“Some look at us pleading for a solution. It's about minor leagues, without any aspirations, not something professional, "he continues. And although Llorca admits that among his players there is one, of Gambian origin, who stands out enough to get him signed by a team in the future, this is not the dominant trend. «If they want to play at that level it is something that they will decide for themselves when they turn 18 and are independent; those we train now are children who really enjoy the sport but just want to play.