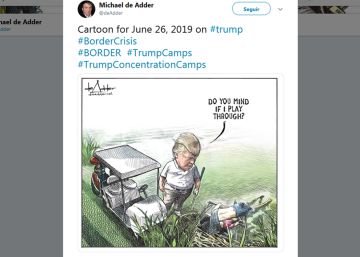 "Do you mind if I keep playing?" Asks Donald Trump, golf club in hand, to the lifeless bodies of the Salvadoran father and girl drowned when they tried to cross the Rio Grande, whose photo became a symbol of the cruelty of immigration policy of the president of the United States. The Canadian cartoonist Michael de Adder published this hard vignette in his social networks on Wednesday 26, which went viral. Two days later, he announced that the Brunswick News group, in which he has collaborated for 17 years, dispensed with his services. The conglomerate, owner of the main newspapers of the Canadian province of New Brunswick, denies that the decision has to do with the drawing, which was not published in any of its newspapers. The controversy coincides with the entry into force, on Monday, of the decision to The New York Times of remove the vignettes of its international edition after criticism for an illustration of Benjamin Netanyahu.

De Adder says that all the vignettes he sent to the group about the US president in the last year were rejected. "I got to the point of not sending any vignette about Donald Trump for fear of being fired," he posted on Monday on Twitter. However, as explained in the social network, the group also censored any drawing "slightly critical" with the Prime Minister of New Brunswick, Blaine Higgs. This was an executive of Irving Oil, an oil company belonging to the same family as the media conglomerate.

The group describes as "completely incorrect" suggesting that it "cancel its freelance"with De Adder because of that drawing." It is a false narrative that has emerged carelessly and recklessly on social networks, "he said in a statement published on Sunday." In fact, Mr. De Adder did not even offer that caricature to the group. " The company claims that it had decided long before its publication to bring back the viñetista Greg Perry, "favorite of the readers", with whom he had been negotiating during the last weeks.De Adder's illustrations were published in the Telegraph-Journal; The Times & Transcript and in The Daily Gleaner.

For Wes Tyrell, president of the Canadian Association of Cartoonists, the timing has not been coincidental. "It's clear that in the last cartoons I was returning to Trump after a break," he said. The Washington Post. "Maybe this was the straw that broke the camel's back." According to Tyrell, Trump was a taboo subject for satirical drawings in the Brunswick News group, and De Adder "is gaining a reputation in Canada as the guy who faces Trump."

"I've been giving the New Brunswick newspapers what they wanted for months, Trump was not on my radar, I work for Canadian newspapers, so it's not necessary to cover Trump 24 hours a day, seven days a week. Canadian is quite interesting now, "says De Adder on Twitter. "But in the last two weeks, I drew three vignettes about Trump, two became viral and the third became a supernova and the day after I was fired, and not only did they fire me, they did not use the vignettes I had already finished. It was as if I had never worked for the newspaper overnight, draw your own conclusions, "he says.

The newspaper The New York Times, in a decision not without controversy, announced in early June that from this Monday he would stop publishing political cartoons in its international edition and the suspension of his contractual relationship with two newspaper cartoonists. In his American roll, the Times does not count comic or satirical vignettes on its pages. The determination of the New York newspaper comes after the April 1 edition of the newspaper published in its Opinion pages a caricature that presented the Israeli prime minister, Benjamin Netanyahu, like Trump's guide dog, which triggered outrage and an apology from the newspaper because the illustration was considered anti-Semitic.