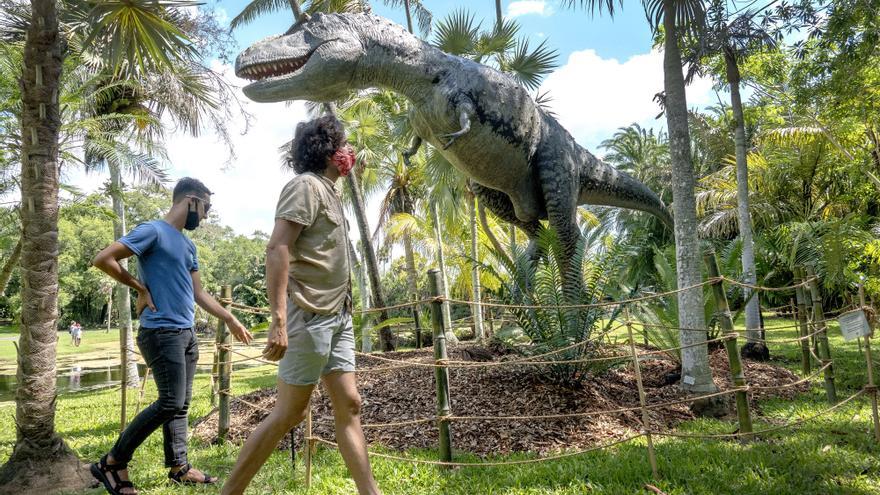 Miami, May 15 (EFE) .- A score of life-size dinosaur sculptures set a “prehistoric adventure” at the Fairchild Botanical Garden in Miami-Dade (Florida, USA), where these fascinating creatures appear surrounded by living plants from the prehistoric world.

“Dinosaurs have been extinct for 65 million years, but no matter how many millennia have passed, we are still fascinated by these creatures,” says a statement from the Fairchild Garden, a botanical garden founded 83 years ago and that as of July 18, when the exhibition closes, it calls itself Jurassic Garden.

Ever wonder how dinosaurs eat or how these giant lizards are related to birds? Or what happens to the wood after millions of years?

These questions, according to the garden located in Coral Gables, a city neighboring Miami, have a “visual” answer with the Dino Discovery Cart rides, which can be done from now until July.

On the walks you will be able to see “real prehistoric fossils and other interesting biofacts up close,” according to the institution.

Life-size dinosaurs are surrounded by the Fairchild Botanist’s permanent collection of ferns, conifers, and flowering plants dating back to the prehistoric world.

The collections of the Fairchild, which is also home to the National Orchid Garden, have never reflected a greater diversity of species than this time, the statement said.

Dinosaurs depended on plant life millions of years ago and some of these plants still exist today. On a map that EFE had access to today during a tour, prehistoric plants such as “Cananga odorata” and “Araucaria muelleri” are recorded.

Of the creatures that have given so much life to the movies and popular imagination there are Velociraptor, Allosaurus and Bambiraptor, among other species of dinosaurs.

Both the giant and miniature sculptures look so realistic that some children asked their parents, “Why aren’t they moving?”

The botanical garden was founded in 1938 by David Fairchild (1869-1954), one of the great explorers and collectors of plant specimens, who brought mango, nectarine and horseradish, among others, to the United States, and Robert H. Montgomery (1872-1953), an accountant, lawyer, and businessman with a passion for collecting plants.