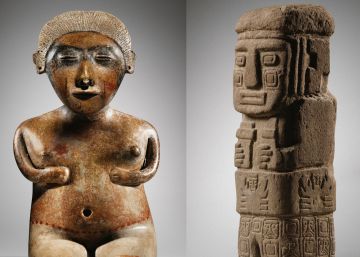 Mexico seems defeated in the fight for the recovery of pre-Columbian art. The Government of the North American country has lost a new battle for the sale in France of a collection with pieces from the Mayan, Olmec, Aztec, Zapotec and Teotihuacan cultures. The Sotheby's house He has auctioned 44 objects on Wednesday night, only 60% of the collection that was offered in Paris. Enough to intensify the open diplomatic gap between the two countries from the dispute to allow the commercialization of pre-Hispanic objects. The Mexican Secretary of Culture, Alejandra Frausto, has described French legislation as "very hostile" to the recovery of cultural heritage and has insisted on the need to convey to the international community the message that "the value of the assets that are expropriated , it is not economic, but cultural. "

An Olmec spoon sold at $ 8,400, a Mayan vessel of 110,000 and a stone mask of Teotihuacan culture at 153,000, were some of the pieces auctioned. The catalog it contained from statues to a funeral urn. "This large set of pre-Columbian art is a testament to the refined taste of a French collector whose life was defined by the aesthetics and integrity of art," said Sotheby's, who declined to spread the name of the former owner.

The collection was composed of 74 objects mostly from the Mexican cultural heritage, according to the authorities of this country. Some had been placed under suspicion. Of the 57 pieces that Mexico has claimed as its own, 35 have been designated as authentically pre-Hispanic. 22 were rated as newly manufactured imitations. Despite that, the sale has left a collection of 1.9 million dollars. "This collection embodies the beauty and soul of these great civilizations," the British house promoted.

The inaction of the French authorities before the commercialization of these objects generates little sympathy in the Mexican Government. "The Mexican Embassy in France and the Ministry of Foreign Affairs disapprove the auction of pre-Hispanic art pieces organized by Sotheby’s in Paris," the Foreign Ministry said Wednesday in a statement. The Ministry of Foreign Affairs made the formal request to the British company not to auction the pieces, but the response was negative.

"Those cultures are not dead, their heirs are alive," Frausto claimed Wednesday. Simultaneously to the auction, the Secretary of Culture was appearing in the Senate about the advances in her area since the arrival of Andrés Manuel López Obrador to the government. One of the points to discuss in the Congress was what the Executive has called “fighting the traffic of historical heritage.” “There are 85 pieces in process of repatriation. We recognize the close collaboration of the United States, Italy and Germany, which are consistent with this policy, but unfortunately not everything is so, "said the official before announcing what was happening in Paris." It is one of the things that hurt us most "he insisted.

Mexican authorities still report the injuries left by a similar episode last September in which they could not stop the auction, also in France, of 120 pre-Columbian pieces. Just as they did on that occasion, the National Institute of Anthropology and History raised the matter and filed complaints with the French Ministry of Justice. In neither case did Mexico receive a response.

The possibility of Mexico to recover the heritage that is abroad is shipwrecked due to the lack of agreements that facilitate the transfer of goods between different countries. A limitation that reduces the number of achievements of the Mexican Government. "Necessary move forward for the ratification of international conventions that strengthen the mechanisms to demand the recovery of the pieces, "said Frausto.