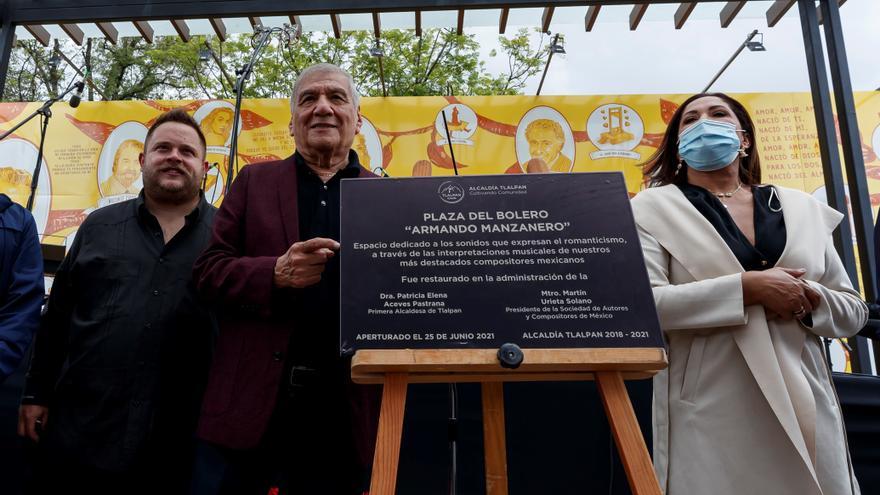 Mexico City, Jun 25 (EFE) .- Friends, relatives and colleagues of the singer and composer Armando Manzanero met this Friday in the south of Mexico City to inaugurate a plaza in honor of this musical genre to the rhythm of a bolero. to the recently deceased artist.

“It is a real pleasure, it is a Friday of celebration and joy for all citizens. We are here to honor his name and recognize the legacy he left to Mexico and the whole world,” said Patricia Aveces, mayor of Tlalpan, the mayor’s office that welcomes the new Plaza del Bolero Armando Manzanero.

The mayor was present at the opening event, in which artists such as Carlos Cuevas, Alejandra Ávalos, Rodrigo de la Cadena, Jorge Muñiz and even the nonagenarian Marilú, known as the Little Doll that Sing, passed through the newly opened stage. emotional version of “No se tú”.

During the day, Manzanero’s successful compositions such as “We are novios”, “This afternoon I saw it rain” or “With you I learned” sounded, dedicated to the deceased singer of the covid-19 in December 2020 and to those who keep the bolero alive.

Present at the event was the singer’s widow, Laura Elena Villa, who said she had spent time sheltered in her home from the blow of losing her partner.

“I met him when I was very young, so he was my friend, my life partner, the love of my life, we were many things. (…) I miss the sunrise with him, having coffee with him,” he told the media. Villa, with tears in his eyes.

His colleagues from the Society of Authors and Composers of Mexico – of which he was president at the time of his death – were also present, such as Gil Rivera, José Alfredo Jiménez Galvez or Martín Urieta, now acting president.

The latter recalled the last 15 years that he was with Manzanero sharing music, life and friendship.

“He told me all his concerns. And apart from being a teacher, he was a great friend and an example that perseverance, persistence and tenacity sometimes exceed talent,” Urieta told Efe.

The existence of this square, those present emphasized, is a tribute to Manzanero but also to the bolero, a genre born in Santiago de Cuba in the 19th century but which found in Mexico a land where it could proliferate.

As detailed by artists and authorities, the intention is that the newly inaugurated square will host bolero music on a daily basis, as happens with the mariachi in the central Garibaldi square in the center of the capital.

At the bottom of the square there is a mural that frames the place and that was made by the artist Luis Barbosa, who placed images of the most famous of the genre, both composers (Manzanero, Agustín Lara or Roberto Cantoral) and interpreters (Javier Solís, Toña la negra or Eugenia León).