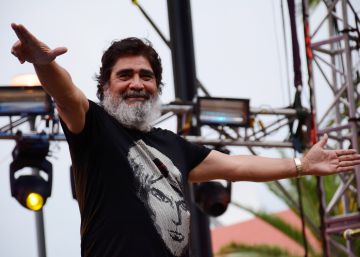 Latin American cumbia is in mourning. The well-known singer and accordionist Celso Pineapple has died this Wednesday after being admitted to a hospital in MonterreyIn northern Mexico, due to cardiac arrest, he has confirmed his record company and his daughter. The 66-year-old Mexican artist, known as El rebelde del accordón, had a career of more than 25 albums and rose to fame as one of the first musicians who fused tropical rhythms and northern music with hip hop, ska and reggae .

"There is no one who resists cumbia," Piña has published in your Twitter account next to a video of Cumbia over the river, his best known song, a few hours before the death. The Mexican press reported that the artist had been emergency transferred for a heart attack and his death was confirmed minutes later. The singer had returned from a tour of the United States last week, after performing last Friday in Denver and two days later, in Chicago. "With deep pain we communicate the unexpected departure of a family member, our friend, the teacher Celso Piña," lamented his record label, La Tuna Records, in a statement.

Piña was characterized by having a busy work schedule with concerts in the United States, Mexico and Latin America. The artist also toured Spain, Germany, France, the United Kingdom and other countries in Europe as an icon of the Colombian cumbia, a style close to the vallenato and which is dominated by the presence of the accordion in the melodies. His last tour European was called Cumbia for the world. He could be seen playing in front of the Eiffel Tower, at an American festival or at a concert in the streets of Mexico.

Piña grew up in the Independencia neighborhood, a troubled neighborhood in downtown Monterrey, one of the most important industrial cities in Mexico. Monterrey was one of the entrance doors of the so-called tropical music, later known as cumbia, which became popular with the arrival of tapes from Colombia and the sonideros, dances organized in popular neighborhoods led by a master of ceremonies. That area of ​​the city had received several Colombian immigrants who later gave way to the urban tribe of the Cholombians, which adopted the cumbia and clothes that used to identify gang members in the southern United States. Piña was forged with that cultural influence, looking south to draw musical inspiration and very close to the border with Texas, where the group and northern bands sounded, in a musical hybrid that today is artificially grouped as Mexican regional music.

He began his career in the eighties as a self-taught musician after his father gave him an accordion and took his first steps with his brothers Eduardo, Enrique and Rubén. "But this music is not played live, vato? "asks the singer in the first chords of Cumbia over the river about the Colombian cumbia, which was cloistered in the recordings of the sonideros: "Pos I'm going to play it, buddy … trying yes, trying, there ta".

He gradually devoted himself to the scene with collaborations with artists of other genres in the early 2000s. Piña recorded with Natalia Lafourcade, Julieta Venegas, Lila Downs, Gloria Trevi, Ely Guerra, Café Tacuba and rapper Pato Machete. It was also recorded The accordion rebel, a documentary that follows its musical journey and was produced by public television in Mexico. He appeared before the media almost always smiling, unpretentious and unwilling to get involved in controversial issues or away from his musical productions.

His influence was a precursor to the rise of cumbia in popular music and his fusion of styles broke gender barriers and borders. The rebel of the accordion is remembered for his simplicity, his creative spirit and as a transgressive artist who broke intoor on the popularity charts with a genre that had been relegated from the conventional scene and was created outside of Mexico. His legacy leaves a void in the world of cumbia, but also for thousands of followers who came to that style at the hands of the great Celso Piña.