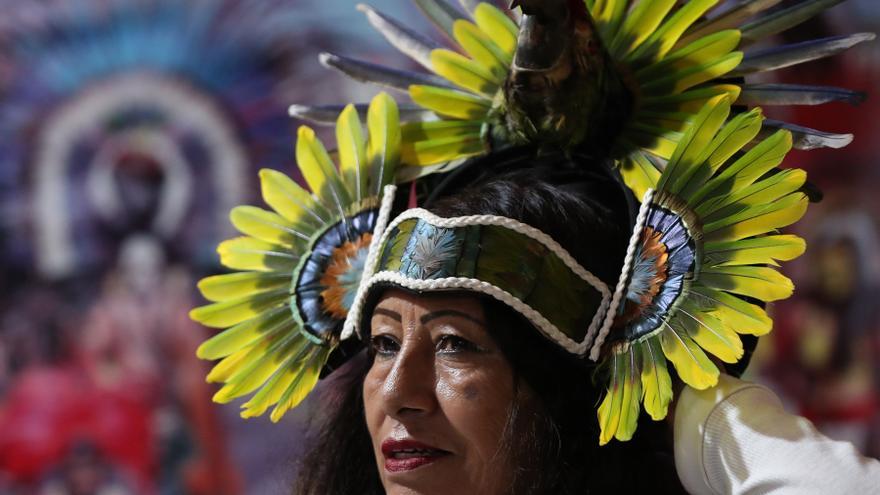 Mexico City, Aug 10 (EFE) .- Dressed in a feather headdress of various birds and hand-woven costumes with skin and colored threads, the members of a family that practices pre-Hispanic dances dance to conquer the heart and consciousness of the new generations and preserve this tradition.

“This is how we take care that this is not lost: conquering their hearts and consciences (of the new generations),” Alejandro Vázquez, who for three decades has led the Huizachtlan group of dancers from the Iztapalapa neighborhood, told EFE. , east of Mexico City.

The rumbling of the drums during their procession is added to the sound of the shells and songs of the dancers or concheros -as they are known- dressed with a skirt, knee pads, wristbands, breastplate and a copilli -a kind of plume-, some adorned with pheasant, turkey, rooster, ostrich or artificial feathers.

Vázquez is the tata (leader) of his calpulli, which is a pre-Hispanic form of organization that refers to families or clans, and has managed to involve five generations of his family in this dance.

Marina Margarita Campos is Alejandro’s wife. When they got married, he says, they did not usually participate in this type of dance. “Only my mother-in-law danced,” she recalls.

However, on one occasion when they attended a patronal feast in the municipality of Chalma, in the state of Mexico, he saw a group of dancers and that was where he found his passion.

“Now there is no dance that we miss, we go to all the events that invite us, because we really like to take this tradition to other places,” he says.

He assures that being part of this tradition that took over his entire family is a pride.

“It does not matter if it rains, if it is hot, if we get tired, it is such a beautiful tradition that we do not want to lose,” he points out.

According to Vázquez, dance is an ancient practice that has been carried out long before the arrival of the Spanish.

After the conquest five centuries ago, it remained hidden but was never forgotten, as it is a way of thanking the forces and elements of nature that give life and understanding that they are one with the universe.

“We dance to the churches, but we know that under each church there is a teocalli, which means houses of God,” he says and says that at the time of colonization the Aztecs pretended to dance to a saint of the Catholic religion to avoid reprisals from the colonizers.

Over the last decades, these groups of dancers have made countless efforts to preserve the tradition, and men like him are in charge of transmitting the Mexican dances and rituals to new generations.

The reason for this dance is to unify man with the cosmos and establish harmony, hence it begins with the greeting to the four cardinal points with songs and prayers in Nahuatl.

For Vázquez, pre-Hispanic dance is a way of life, a way of showing Mexicanity and pre-Hispanic traditions to the world in order to perpetuate them.

Proudly, he shows the photographs in which he shows the various places where they have carried this tradition. Not only in Mexico, but also in Europe.

“(They go to) Germany, they arrive and there they are transported to Vienna, Austria, to other countries, trying to take dance and culture there to promote awareness,” he says.

Alejandro has been in charge of involving not only his wife and children, but also his daughters-in-law, grandchildren and great-grandchildren, who participate with him in each of the events they attend.

He assures that the tradition is in their blood “since children, as the parents or nanas used to say, they feel (the dance) in the womb and pregnant women are dancing, they already feel, hear the sound of the drum.”

This Friday, Alejandro, along with three of his relatives, will be present at a cultural event on the occasion of the 500 years of the Spanish conquest, an event now renamed “indigenous resistance”, which will be held in the center of the Mexican capital. .

The house of this family serves as a small workshop in which Alejandro is dedicated to designing and making his own costumes, sewn by hand and made with exotic skins and accessories, and supported by his wife.

The cost of making an outfit is around 4,000 pesos the cheapest (about $ 199), but to that we must add the accessories and the copilli (plume), which is decorated with feathers, many times of exotic birds that you get in aviaries.

“We have between our heads and the report about 15 kilos but we are already mentally and physically prepared,” he indicates, as he affirms that in a day they can dance up to 8 or 9 hours with 30-minute breaks every two hours.

At 70, Alejandro is fully dedicated to dance and its teaching, as he believes that it is the only way to keep the tradition alive.

“Anyone can come, I teach them free dance,” he affirms while confirming his love for this tradition.