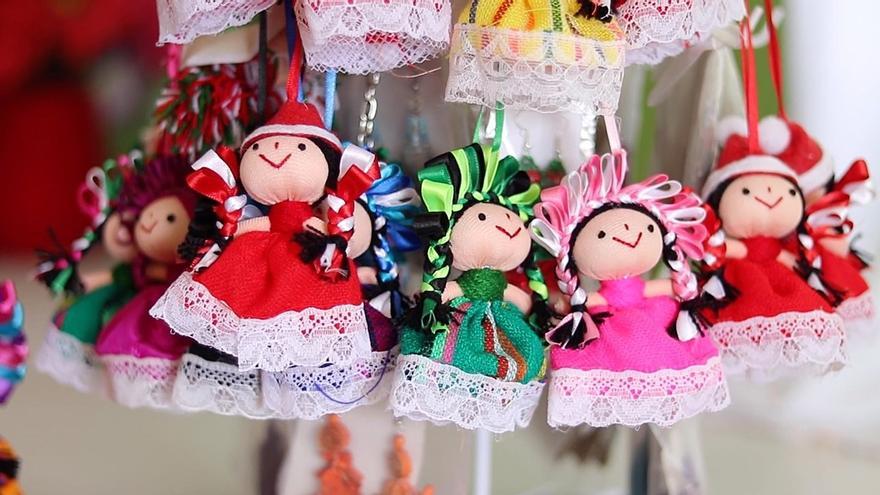 Querétaro (Mexico), Dec 19 (EFE) .- Otomi dolls are a cultural heritage of the state of Querétaro, in central Mexico, but now they have adapted to the Christmas season with the hope of recovering the economy for more than 10,000 artisans from the region.

Faced with the covid-19 crisis, the Otomi artisans of Amealco, in Querétaro, have suffered a difficult economic situation due to the confinement measures, which is why they now offer their clients these traditional indigenous dolls decorated for their Christmas pine trees and even births. Christians.

Lucía García has a workshop in the community of San Ildefonso Tultepec that employs a dozen women who maintain their traditional embroideries in artisan products, such as these dolls that have become an icon of the state.

But his business has suffered from confinement with low sales throughout the year, for which he has been forced to reinvent himself.

“We do live this season or this year of the very difficult pandemic because at the beginning they closed everything and our sales are to sell from person to person, to be very in contact with our customers, to seek them, to offer them, and with the pandemic It couldn’t be done, ”he told Efe.

FROM TRADITION TO FASHION

The Otomi are an original people from central Mexico with more than 600,000 descendants, according to the National Atlas of Indigenous Peoples of the Government of Mexico.

Its traditional crafts are great tourist attractions of states in the region, such as Querétaro, Hidalgo, Puebla and Tlaxcala.

The Otomí doll is a tradition with more than 100 years in the municipality of Amealco and on April 18, 2018 it was named a cultural heritage of Querétaro.

An estimated 10,000 indigenous women are dedicated to the manufacture of these dolls known as “Lele”, which in Otomí means “baby”.

But now, the Otomi artisans offer their dolls with seasonal motifs to adorn the Christmas trees of the homes with a detail that provides warmth and hope in these uncertain times.

María Guadalupe Cruz, one of the workers in Lucía García’s workshop, highlights the work of the creators of these objects.

“The handmade doll has adapted to this Christmas season, what was sought is that it fulfill what customers want it to be to have the doll that can decorate their homes in these times,” he explains.

“The doll is made by artisans in the community, who put a lot of dedication so that this doll can brighten the lives of the people who buy it,” he adds.

The idea has been accepted by its clientele, also due to the variety of Christmas decorations they offer, such as a unique nativity scene or nativity scene (nativity scene, in Spain) made with their dolls, which can be personalized by their clients.

“We came up with the nativity scene, we were offering and several people told us that they did like it and that they could put it on their tree, and that they looked good,” he details.

“We put the color that they ask us or the color that we also see that it is Christmas and the colors that adapt, it did catch their attention and we hope they continue to know what we do and that they consume what is made by hand,” he says.

For the Christmas tree they specifically prepared some dolls dressed in the colors of the season, in what ends up being a cultural syncretism, said Eva María García, daughter of the owner of the workshop.

“It is a doll dressed in red and with a Santa Claus hat. This is not like we want to change our culture because it is a tradition from another side, but we seek that our doll can also be included with other cultures,” he justifies.

The proof is that Otomi dolls have traveled to exhibitions in Spain, China, the United States, the United Kingdom, Canada, Australia and other countries to showcase indigenous culture.