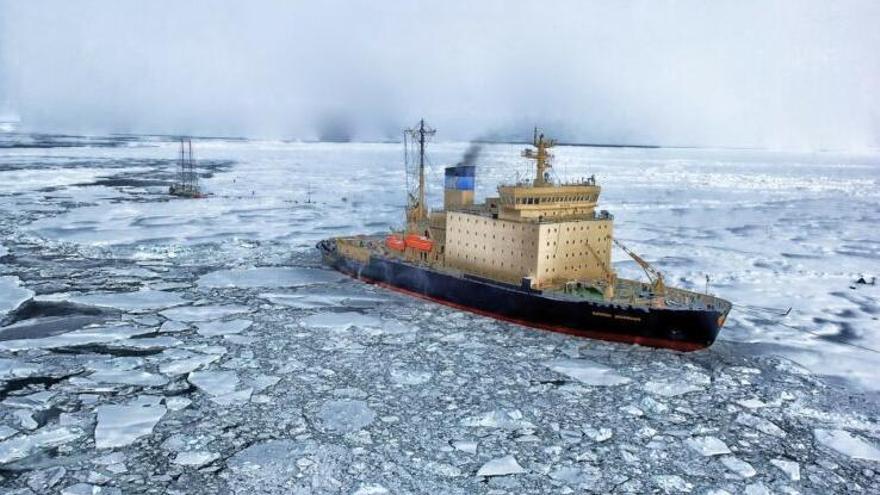 An ISSS expedition discovers a new source of methane in the Arctic: a greenhouse gas that has a global warming effect 80 times more powerful than CO2.

The climate change that humans are causing is putting our very existence as a species at risk. And we have more and more reasons to be concerned.

One of the biggest uncertainties we face is the methane hydrates, which some scientists classify as ‘the sleeping giant of the carbon cycle’.

Under certain conditions of cold and / or high pressure, methane hydrates – also known as methane clathrates – can exist. But the increasing temperature of certain regions of the ocean is causing hydrates to thaw.

In the Arctic we can find very long stretches of underwater permafrost (the layer of permanently frozen soil). Hundreds of kilometers where there is presence of clathrates. Y a team of scientists belonging to the ISSS (International Study of the Siberian Platform, for its acronym in English) has shown its deterioration.

In the Laptev Sea, north of Siberia, they have found large craters on the sea surface as a result of the breakdown of hydrates and subsequent elimination of methane bubbles. They have also detected 350 meters deep methane concentrations 400 times higher than atmospheric.

When the hydrates thaw, the methane is free and it is mostly dissolved in water. But a certain amount reaches the surface, from where it could escape into the atmosphere. A worrying fact that now seems likely, since the ISSS researchers have detected a concentration of methane on the surface of the Laptev Sea up to 5 times higher to normal values.

Methane is a greenhouse gas which can be produced by many processes naturally. It is well known that cows emit large amounts of this gas. Other sources, such as rice fields do too although they may be more ignored by the general public. But regardless of its origin, the greenhouse effect of methane has been deeply studied.

This gas has a half-life of 12 years in the atmosphere. That is, 12 years after its release, its concentration is reduced by half.

But it has a very dangerous counterpart, and that is Methane, over a period of 20 years, has an effect on global warming 80 times more powerful than CO2.

Therefore, the situation of methane hydrates should be a matter of global urgency.

These are huge accumulations of methane that remain on the ocean floor or under polar seas but which, due to the warming of the waters, are starting to break free.

The dynamics that methane could follow after hydrate breakdown are still unknown. The vast majority of the gas may dissolve in the vast ocean and only a negligible part is released into the atmosphere.

But, putting us in the worst of the scenarios, if most of the hydrates were to thaw abruptly, the methane emitted could be enough to warm the Earth up to 6 ° C in just 80 years.

It should be said that the observations of the ISSS scientists have to be taken with caution, because they are still preliminary data, pending study and official publication.

But if confirmed, it would already be the third site in the Arctic where the emission of methane is recordedor as a result of the breakdown of hydrates.

Studies like the one above show what is already a reality. And while it is too early to predict the course of clathrates, the detection of these methane concentrations in the Arctic Ocean indicates a change in trend, a critical point that could have dire consequences for life on the planet.

To continue releasing greenhouse gases, we could go even further into a dramatic positive feedback spiral. A daunting situation where an increasingly warmer ocean favors the elimination of clathrates, which in turn would lead to higher methane emissions and the consequent increase in global temperature.

The Arctic ocean is getting less cold. Warm currents from the Atlantic are entering it as the sole consequence of anthropogenic global warming. And this situation is not going to reverse in the short term. In fact, As of October 2020, ocean ice has not yet started to form In the Arctic. Another dramatic record ever seen.

If this continues, the methane hydrates will continue to break down. And the future of Humanity will be increasingly uncertain.