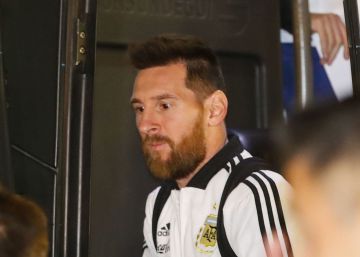 "Messi is here," the Hebrew press announced the good news of the arrival of the Soccer Messiah to play this Monday's first meeting in the Holy Land. The presence of Lionel Messi in Tel Aviv in front of his teammate in Barça Luis Suarez raised the friendly Argentina-Uruguay to the most relevant party category in the history of the State of Israel. Both teams – which make cash in the Middle East while preparing the Latin American qualifiers for the World Cup in Qatar – still had doubts about their participation 48 hours before the scheduled start of the match (21.15, one hour less in peninsular Spain). With the nearly 30,000 Bloomfield stadium locations sold for weeks, organizers have had to work to convince Argentine and Uruguayan federations that security was guaranteed after the war escalation that broke out last week in the Gaza Strip.

“There was concern among our relatives in Montevideo; they sent us images of missiles that exploded in the air, ”said Uruguay coach Óscar Tabárez, shortly after arriving in Israel on Sunday. Between the past 12 and 14 days, the Army faced the Islamic Jihad militia in a spiral of violence that claimed the lives of 34 Palestinians – 15 of them civilians – in bombings on Gaza. From the coastal enclave, more than 450 rockets were fired into Israeli territory, which caused injuries to fifty civilians. The launch of projectiles came to activate anti-aircraft alarms in towns on the southern periphery of Tel Aviv.

In this tense climate, which lasted with sporadic violations of the ceasefire until Saturday morning, Israeli billionaire Sylwan Adams, who runs a large part of the expenses of the sporting event, intervened to convince both teams to play in Tel Aviv was not dangerous. Adams was already behind the transfer to Israel of the three first stages of the 2018 Giro, in an operation that cost more than ten million euros. This Canadian-born philanthropist became famous last spring by financing Madonna's brief performance at the final gala of the Eurovision festival in Tel Aviv with a million dollars.

Messi is now wearing the albiceleste shirt in two great Latin American classics after the three-month sanction imposed by Conmebol in the last edition of the Copa America for statements about “corruption” in football. The forward five times awarded the Golden Ball already premiered on Friday in Saudi Arabia, with the only goal of a friendly match that resulted in the Argentina's victory over a Brazilian national team in low hours.

"Messi plays, you can rest easy," Argentine coach Lionel Scaloni announced on arrival in Tel Aviv, who also promised to include Manchester City striker Sergio in the team Kun Omen. "Some players are tired, although they have no physical problems," said the coach.

Messi already traveled to Israel in 2013 along with the staff of Barcelona during the pre-season preparation phase. He then participated in a "peace tour", in which the Blaugrana visited teams of Palestinian and Israeli children. Last year, however, the Argentine Football Association canceled a friendly match planned in Jerusalem with the Israeli national team in the face of growing concern for the safety of its players. Supporters of the propaganda campaign Boycott, Divestment and Sanctions (BDS) to Israel then called for the suspension of the meeting. These groups considered that the Israeli Government was using sport to promote the international recognition of Jerusalem as the sole capital of the Jewish State. The Palestinians aspire to establish the capital of their future state in the eastern part of the Holy City.

On this occasion and with Tel Aviv as a sports scene, the pressures of the BDS movement have barely been heard. Silenced also the echo of the sirens of the missile alarms, thousands of Argentine and Uruguayan Jews living in the Hebrew State can enjoy together with the rest of the Israeli fans of the first friendly in three five-year-olds of two great South American teams. Argentina and Uruguay, which add four World Cups in equal parts, have not faced each other in a legendary classic of the Río de la Plata for more than two years. Predictably, the party will also be followed expectantly in the Palestinian territories. The Palestinian Football Association, whose president was suspended for a year in his duties by FIFA accused of "inciting hatred and violence against Messi", has not raised any objections.