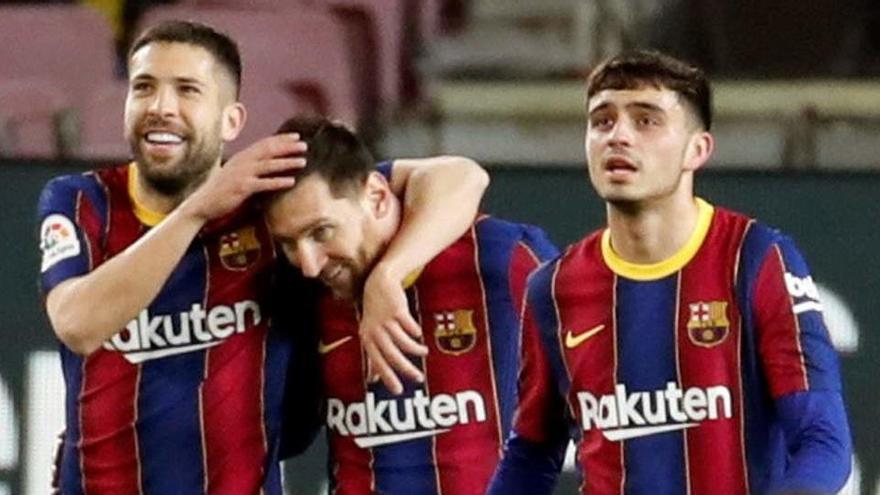 With its ownership before the Huesca, Leo Messi equals Xavi Hernández as the soccer player of Barcelona with more official matches played in its 121-year history: 767.

To commemorate it, FC Barcelona dressed one of the backdrops of its stadium with a canvas and the inscription: “Tocant el cel” (Touching the sky) in which the figures of Xavi and Messi.

He also enabled the label during the day # Messi767 on Twitter to collect the publications in tribute to the ten Barça player.

The Argentine forward reaches this figure with 510 league games played counting tonight, 149 in the Champions League, 79 in the Copa del Rey, 20 in the Spanish Super Cup, 5 in the Club World Cup and 4 of the European Super Cup. In total, he accumulates 659 goals and 289 assists (in the absence of the match against Huesca), according to Transfermarkt.

For his part, the Spanish midfielder divided his 767 games with the Barça shirt as follows: 505 in the League, 157 in the Champions League, 70 in the Copa del Rey, 14 of the Spanish Super Cup, 13 of the Spanish Cup UEFA, 5 from the Club World Cup and 3 from the European Super Cup. Xavi’s numbers were 85 goals and 184 assists.

Xavi’s last meeting with the Barcelona shirt was in the final of the Champions that Barça beat Juventus 3-1 in 2015 in the Berlin Olympic Stadium.

“It had to be Leo,” Xavi explained to Mundo Deportivo. “It is fair that the best player in history is the one who has defended the Barça shirt the most times”, added the Egarense.

The two, along with Carles Rexach, They also share the record for consecutive seasons in Barcelona’s first team with 17.

With these 767 games as Barça player Leo Messi has scored another record for his collection, among which others stand out, such as having surpassed Pele as the top scorer in a single club (659 goals), the highest scorer in the history of the League (463 goals) or the most goals in a calendar year (91 in 2012). Furthermore, he is the only player to have six Ballon d’Ors and six Golden Boots.

For now Andoni Zubizarreta He is still the player with the most games played in the history of the League with 622 (distributed between Athletic Club, Barcelona and the Valencia) and Raúl González, the one who has played the most with a single club, in his case the Real Madrid, with 550.

The numbers of Messi and Xavi in ​​the 767 games as Barça players:

4 of the European Super Cup (3 goals and 3 assists)

3 of the European Super Cup (No goal or assistance)

Márquez: “The fastest rider is the one who leads the way at Honda”