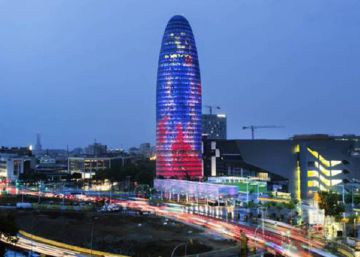 Merlin Properties has obtained a gross rental income of 394.9 million in the first nine months of the year, 6.4% more than in the same period of 2018. However, this improvement in income in what is its main activity does not translate in its results of the third quarter of the year in a greater benefit. This has reached 316.2 million euros, 37.4% less than a year ago since an extraordinary income was then recorded for the sale of its participation in Testa Residencial to the Blackstone fund. Discounted the extraordinary income of the past year and of the present, the benefit until September would be 189.5 million euros, 22% more than in 2018, as announced by the company after presenting its results to the National Market Commission on Thursday. Values.

The socimi (listed real estate investment company) also announces in the subsequent events of its results that it has taken a pledge of 10% of the Castellana Norte District, known as Operation Chamartín, in exchange for the loan of 86 million to the construction company San José. The last 31 of octure, Merlin announced that it had bought San José for 169 million, 14.46% of the Castellana Norte District, an urban development in the north of Madrid that, when it receives the approval of the regional government, will be one of the largest real estate operations in progress in Europe. From that operation it also transpired that the socimi had made a loan to the construction company, which still had 10% of the business (the rest is in the hands of BBVA). It is now known that 10% was placed as one of the guarantees of this financing.

It is not the only relevant operation that Merlin has in progress. In another of the subsequent events he announces that this month he expects to close the sale of 26 office buildings valued at more than 200 million euros and for which he has already received a deposit. The portfolio totals about 133,000 square meters and is composed of real estate located in Madrid and Barcelona.

Merlin Properties is the first Spanish socimi in market capitalization and one of the two real estate companies listed on the Ibex 35 (the other is the Colonial socimi). Its main business is the rental and portfolio of assets is mainly composed of offices and commercial centers and stores in three cities (Madrid, Barcelona and Lisbon), although it also includes logistics warehouses and even some hotels. The set exceeds a market value of 12,375 million euros, according to data published by the company last June, since the valuation of assets is only carried out every six months.

Back to the results of the first three quarters of the year, the socimi highlights the improvement in the occupancy of its properties that has gone from 92.9% in June to 93.2% in September. The logistics business is the one that has the best performance in that regard since the occupation reaches 95.7%, the same figure as three months ago, although the company points out that after the recent signing of a contract with Mercadona for an asset in Getafe (Madrid) this has grown to 97.3%.

In the chapter on investments made in the first nine months of the year, Merlin notes that he has spent more than 177 million euros and that the purchase of buildings has focused mainly on Portugal. With the acquisition of three office buildings in Lisbon (one of them Nestlé headquarters), the socimi highlights that it has become the second largest office owner in that market.